HOLMDEL THEATRE CO. CANCELS PRODUCTION OF “THE LION IN WINTER 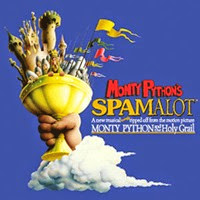 WHEN: Saturday, September 13, 1 PM-4 PM; Monday and Tuesday, September 15, and 16,  7 PM – 9 PM.
WHERE: Phoenix Rehearsal Center, 111 Monmouth Street at the corner of Pearl Street and right next door to the Count Basie Theatre.

All roles are open for this revival of the award-winning Broadway musical which will open at the Count Basie Theatre in Red Bank in mid-November.

The show will be directed by Gary Shaffer with musical direction by Bob Sammond and choreography by James Steele.

Spamalot is an irreverently hysterical musical comedy "lovingly ripped off from" the 1975 film Monty Python and the Holy Grail, with many roles for men from 30 to 50 years of age.

The director is looking for people with excellent comic timing who can move well, with the ability to do accents a plus. Most of the roles are character voices and the ability to be funny supersedes vocal and dance skills.

FREE CONCERT FOR ALL AGES IN BOYD PARK, NEW BRUNSWICK

If you attend the event, tell them you learned about it from the NJ Arts Maven! Subscribe to get free daily updates!
Posted by Ruth Ross

FINAL WEEKEND FOR “THE ALCHEMIST” @ STNJ

A YEAR WITH FROG AND TOAD

All roles for Adults and Children ages 8 and over are open.

Adapted from the Broadway hit, A YEAR WITH FROG AND TOAD (Theater for Young Audiences) was nominated for 3 Tony Awards—including Best Musical. Based on Arnold Lobel's well-loved books and featuring a hummable score by Robert and Willie Reale, this whimsical show follows two great friends—the cheerful, popular Frog and the rather grumpy Toad—through four, fun-filled seasons.

A WINNING SEASON UP AT GEORGE STREET PLAYHOUSE

A hilarious comedy about the oddest of odd jobs. “Streisand most likely won’t come, but you should!” -Associated Press
READ MORE

A fast-paced, funny and remarkably powerful play about fame, celebrity and keeping up appearances.
READ MORE 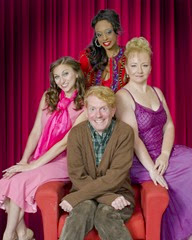 WHEN: September 6 through October 11, 2014. Fridays and Saturdays at 8 PM (with the exception of October 3rd and 4th) and Sundays at 2 PM.
WHERE: The Little FirehouseTheatre, 298 Kinderkamack Road in Oradell
TICKETS: $24 for all performances. Discount tickets for students age 25 and under with proper ID are available for $14 by phone or walk-up only.
Tickets can be purchased online at www.bcplayers.org, by calling 201-261-4200 or by visiting the box office at 298 Kinderkamack Road in Oradell during regular box office hours. Visa, Master Card, and American Express are accepted.
Those interested in Group Sales of 20 or more tickets can call 201.261.4200 (Mailbox #6).
Parking is free at the Park Avenue municipal lot, across the street, one-half block north of the theater.

As it has for the past few seasons, BCP will continue to offer a “Questions & Artists” (Q&A) discussion following select performances. The Drowsy Chaperone Q&A will kick off immediately following the September 12, 2014 performance. Admission is included in the cost of the ticket.

This charming and slightly wacky tribute to the musicals of the 1920s is a rare combination of modern wit and classic musical comedy. Regarded as “a musical within a comedy,” The Drowsy Chaperone begins when a modern day, die-hard musical theater fan known simply as “Man in Chair” plays his favorite cast album, the fictional 1928 musical comedy The Drowsy Chaperone, on his turntable. As the overture starts the musical bursts to life in his studio apartment, telling the rambunctious tale of a brazen Broadway starlet giving up her life on the stage to marry her true love, and her producer so desperate to keep his showgirl that he will go to great lengths to stop the nuptials. With an elaborate cast of over-the-top characters, including the dashing groom, his best man, two gangsters posing as pastry chefs, a Latin lover, and a drunken chaperone, The Drowsy Chaperone boldly addresses a great unspoken desire in everyone’s heart - to be entertained.

Bergen County Players, Inc. is a non-equity, non-profit community theater company dedicated to presenting quality productions for the enrichment of the community.

Join us to hear Steven Less, son of artist and Holocaust Survivor, John H. Less, talk about his father’s experience in Shanghai during WWII. .

Please bring a dairy lunch. Dessert and beverages will be served.

Questions about the Lunch & Learn, please contact the Holocaust Council at 973.929.3194 or holocaustcouncil@jfedgmw.org 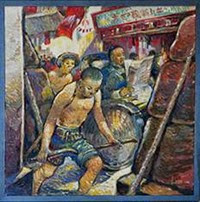 For more information about the exhibit at the West Orange JCC: http://jccmetrowest.org/east/gaelen-center-for-the-arts/artgalleries/

This event is not in NJ, but it is not far away. 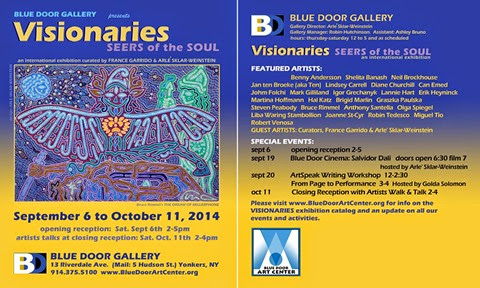 VISIONARIES: SEERS OF THE SOUL 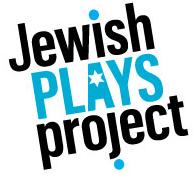 We are delighted to announce that the Jewish Plays Project is now accepting Project Submissions for its 2015 season.

In past seasons, we have accepted new work formally through the Jewish Playwriting Contest and informally through a variety of industry channels. This year, we’re combining the two. Every project will go through the same online channel, and it will be up to the primary creative on each to select to which programs they want to submit.

We’re aiming to keep control of your work in the artists' hands. Do the writers want as many opportunities for your new work to be seen, developed, appreciated, and advanced? So do we. They can check all the boxes. Writers want us to look at your new play but don’t want it in the public eye of the Contest? No problem. They can just leave that Contest box blank, and we’ll keep it to ourselves.

We’re also accepting musicals this time around! We developed our first musical last year (Sharyn Rothstein and Kris Kukul’s modern Megillah, Beauty Queen) and really liked it. While musicals don’t quite fit into our Contest or OPEN structure yet, we want to survey the field and find out what’s being created. Can't wait to see 'em!

What’s the Same This Year?

Our two main development programs – the Contest and OPEN: Festival of New Jewish Theater at the 14th Street Y - rock on. The Contest will take us around the country, bringing more than 500 diverse and committed lay leaders into the conversation to help us find the material that best represents our community right now. OPEN will light up New York in June, 2015 with the Contest winner and a few additional projects selected by the JPP staff.

What Do We Want To See? 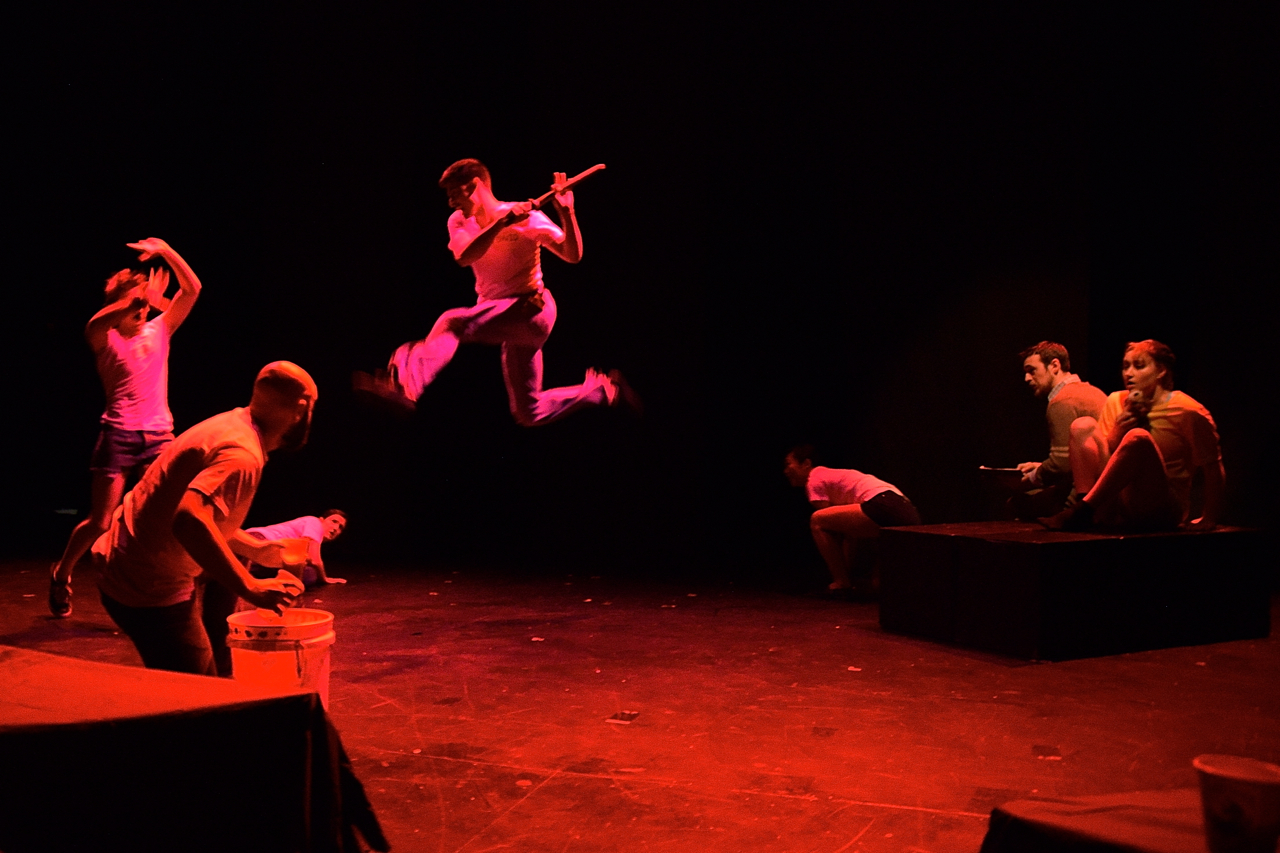 Plays that think differently about what Jewish theater can be, strive for epic size and impact, and embrace the emotional, the mystical, the theatrical. 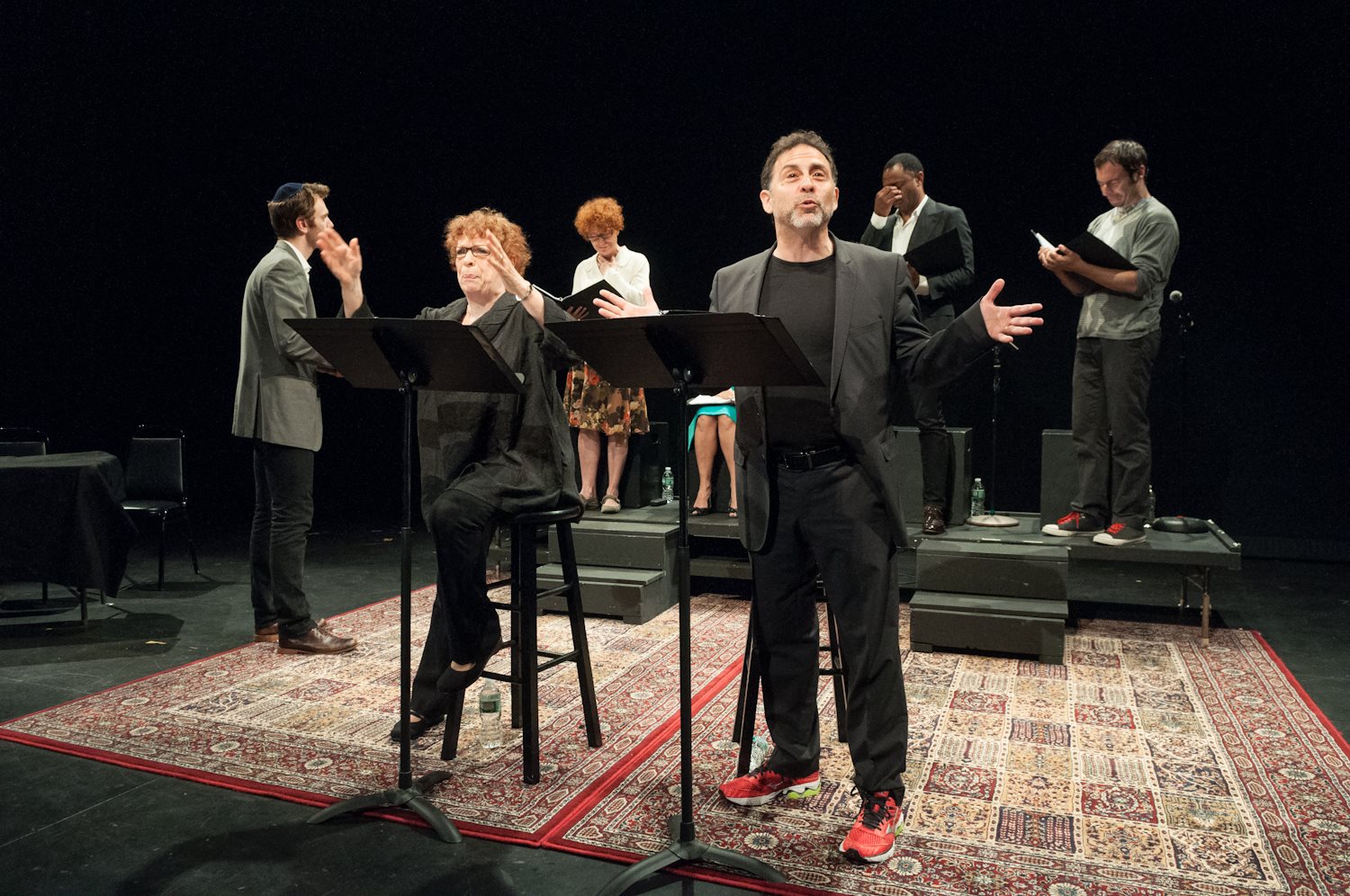 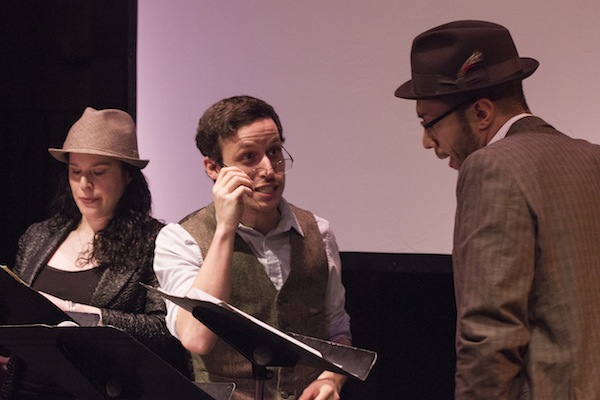 We're asking the field to take a deep look at Jewish ideas, traditions, stories, myths, culture (and yes, even religion). We hope they get into this ancient balagan that’s full of really smart, useful, ethical and moral rules. We want them to show us how they Jew.

That’s it really. Stay tuned to this space to see what we get. Submissiosn are open until October 9.

Make sure your colleagues, friends and enemies know!

I am so excited to post this notice about WITTENBERG, being produced at STNJ this September. I attended a staged reading last winter and we recommended that it be produced on the STNJ stage. It is a hilarious take on WHAT IF? And it stars (and is directed) by some of the most talented actors in NJ. Here it is!

The Shakespeare Theatre is proud to present the New Jersey premiere of the award-winning play Wittenberg by David Davalos, in which he ingeniously manipulates time and space to unite an unusual trio—Doctor Faustus, Martin Luther, and Hamlet—for a witty and provocative debate about faith, fate, existence, and tennis. The “big questions,” the enigmas that eternally puzzle mankind, are given clever and delightfully quirky forum in this contemporary riff on the age-old and eternal conudrums. The Washington Post promises, Wittenberg “should delight Tom Stoppard fans, recovering English majors, disillusioned academics and anyone who has ever wondered what Helen of Troy was like in the sack.”

A play that the Philadelphia Inquirer winkingly celebrates as “Finally—a decent Protestant Reformation comedy!”, Wittenberg begins in northern Germany, the year 1517, on the University of Wittenberg campus. Young Hamlet, prince of Denmark, is a senior, unsure of his beliefs after an eye-opening summer spent studying abroad. Upon his return to school, he seeks guidance from his two trusted professors—philosopher John Faustus and theologian Martin Luther.

Inspiration struck when Davalos, an actor as well as playwright, worked on a production of Hamlet. As he listened in the wings to the young prince’s speeches, he considered the prince’s intellectual and religious background, the foundation of Shakespeare’s tragedy. Both Hamlet’s mother Gertrude and his scheming uncle, the new king Claudius, plead with the prince to “go not to Wittenberg,” declaring “for your intent in going back to school in Wittenberg, it is most retrograde to our desire” (Act I, scene ii). Davalos, speaking with the San Antonio Current, said he began to wonder, “what was Hamlet doing in school before Hamlet?”

After nearly eight years of research, Wittenberg premiered in 2008 at Philadelphia’s Arden Theatre Company. The New York premiere followed in 2011; The New York Times declared, “Hilarity, thy name is Wittenberg.”

Davalos sets his play Wittenberg mere weeks before Luther’s rebellious act. The university depicted in the play, moments before the start of the Protestant Reformation, is, as Davalos described to the San Antonio Current, “a time and place somewhat like Berkeley in the 1960s, a center for intellectual ferment” and “a certain amount of rebellion.”

Unlike Luther, the character of Doctor Faust is literary fiction, nearly as famous as Hamlet. Beginning as a German legend about a learned scholar who strikes a deal with the Devil—exchanging his soul for earthly pleasures—Faust was most famously depicted in Elizabethan dramatist Christopher Marlowe’s 1604 play The Tragical History of Doctor Faustus and Goethe’s early-19th century editions of Faust. In Goethe’s interpretations, Faust and the Devil travel through time, meeting Helen of Troy; the infamous beauty appears in Davalos’s script as well.

The Centenary Stage Company, a not-for-profit professional equity theatre located on the campus of Centenary College in Hackettstown will hold  Auditions for the production of HARVEY.

The production will run Oct. 3-19th, with the first rehearsal on September 15.

Performers should bring a photo and resume, stapled back-to-back.

Actors may read sides from the script which will be provided at the audition, or perform a monologue for the audition.

Visually-impaired performers may request an advance copy of the sides when making an audition appointment.

CSC operates under a SPT Actors Equity Association contract, with a weekly salary of $332.00 for union actors, and a stipend for non-union actors.

MAKE YOUR OWN SHOFAR IN MONMOUTH COUNTY 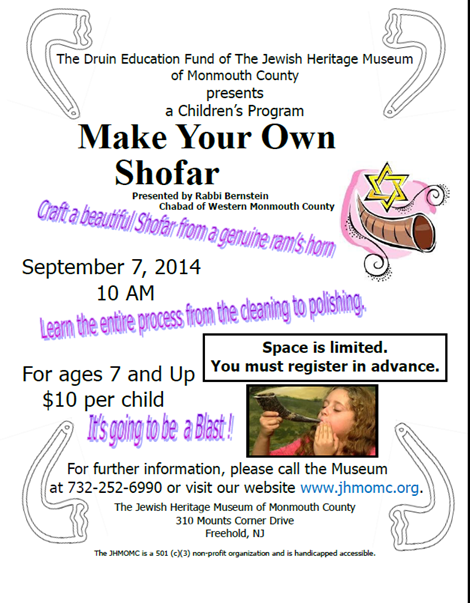 The Druin Education Fund of The Jewish Heritage Museum of Monmouth County will present a children's program:

Make Your Own Shofar
WHEN: Sunday, September 7, at 10 AM
WHERE: The Jewish Heritage Museum is located at 310 Mounts Corner Drive in Freehold Township.  It is a 501(c)(3) not for profit organization and is handicapped accessible.
ADMISSION: $10.00 per child
For more information or to make reservations call the Museum at 732.252.6990or visit its website at www.jhmomc.org.
Advance registration is required so that adequate supplies will be /on hand.

Taught by dynamic Rabbi Bernstein of the Chabad of Western Monmouth County, participants will craft a beautiful shofar from a genuine ram's horn, from the initial cleaning of the horn to the final step of polishing it. This event. suitable for ages 7 through teen, promises to be a "blast" so sign your children up quickly as space is limited.

IMAGINE YOURSELF ONSTAGE @ STNJ THIS FALL

OPEN AUDITIONS FOR “THE LION IN WINTER”