During Exit 0, the seashore town becomes a veritable jazz village. I imagine that it must be like that in Sundance when Hollywood comes to their town for the annual film festival…—Jazz Times Magazine 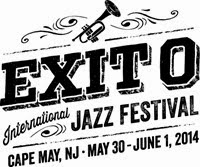 WHEN: May 30-June 1 (scroll down for schedules and venues)
WHERE:
TICKETS: Pop’s Pass $38. Provides unlimited access to club shows. Duke’s Pass: $179. Includes all headliners, club and Jazz at The Estate shows. Count’s Pass: $145. All-access pass for Friday and Saturday only. Individual tickets are available to all events.
Tickets can be purchased by calling the Cape May Convention Hall Box Office at 609.884.9563 or by visiting www.exit0jazzfest.com. Hotel packages are available.

The charming Victorian seaside town of Cape May, New Jersey, will transform into a bonanza of incredible world class music, fine wine, great food and happy music fans for the 3rd Exit 0 International Jazz Festival. The festival will host over 100 international touring musicians in an atmosphere similar to stylish, accessible European festivals, particularly with the launch of Jazz at The Estate, an outdoor music venue. The perfect size for a family-friendly festival, Exit 0 offers fest-goers the opportunity to stroll from venue to venue and revel in many styles of music from jazz, soul, blues and R&B—not to mention the gorgeous ocean setting of the National Historic Landmark city.

Named for the exit to Cape May off of the Garden State Parkway, the festival attracts a loyal diverse audience of thousands from the major metropolitan regions surrounding Cape May including New York City, Wilmington, Philadelphia, Baltimore and the Washington, D.C. metropolitan area, all within a four- or five-hour drive of Cape May. The Festival features Grammy Award-winners, living legends, NEA Jazz Masters, emerging jazz stars, international musicians and homegrown talent too. This first spring version will also offer brass band parades and an open-air gospel concert at the famed Congress Hotel, a lead sponsor for Exit 0.

DEE DEE BRIDGEWATER (right), one of the pre-eminent jazz vocalists in the world, an NPR program host, a GRAMMY winner and an accomplished actress too who was just featured Off-Broadway starring as Billie Holiday.

ROY HARGROVE (right, below), another GRAMMY winner and one of the original young lions who wowed on the trumpet and crosses genres blending jazz, hip hop and old soul.

Local Cape May Boy Turned Jazz Impressario Michael Kline, organizer of the new Exit 0 International Jazz Festival in Cape May, returned to his boyhood summer home of Cape May in 2005 following Hurricane Katrina in New Orleans, where he had lived since 1992 working for jazz artists and hosting a radio show on WWOZ FM. Distressed at the loss of the semi-annual Cape May Jazz Festival, which ended a 17-year run in 2011 due to economic difficulties, Kline was determined to bring a jazz festival back to the Cape but wanted to bring a bit of that New Orleans flavor to it.

Kline revives Old Cape May Jazz Fest & Relaunches It As Exit 0 International Jazz Festival—right After Hurricane Sandy! Kline and his team were successful with the November 9-11, 2012, launch of the first annual Exit 0 International Jazz Festival—or Exit 0 as it’s called, just like the exit on the Garden State Parkway for Cape May—despite the launch following in the wake of Hurricane Sandy. The inaugural Festival featured headliners Ramsey Lewis and Christian McBride and more than 40 shows by 100 artists in seven venues. Over 2200 happy locals and tourists turned out and this past November, over 3000 people came. We are expecting up to 5000 this month!

Dee Dee Bridgewater
WHERE: Xerox Main Stage (Convention Center): 7 PM/9 PM
Over the course of a multi-faceted career spanning four decades, the three-time Grammy Award-winner and Tony Award-winner has ascended to the upper echelon of vocalists, putting her unique spin on standards, as well as taking intrepid leaps of faith in re-envisioning jazz classics.

Tia Fuller Boiler Room @Congress Hotel 930pm/1130pm
The dynamic saxophonist is best known for her time touring with Beyonce but get to know her crowd-pleasing music on its own.

Roy Hargrove Xerox Main Stage (Convention Center) 7pm/9pm
The Grammy-winning trumpeter is among the premier players in jazz, hip-hop, soul & beyond. With nearly 20 recordings as a leader, he has played and recorded with luminaries including Sonny Rollins, Herbie Hancock and Dizzy Gillespie.

Jazz at The Estate Outdoor Stage 12-6 PM
Exit 0 presents Jazz at The Estate in partnership with the Mid-Atlantic Center for the Arts & Humanities. Rain or shine, the outdoor stage on the grounds of the historic Emlen Physick Estate in downtown Cape May will offer great music, foods, crafts and locally produced wines and brews.

Daisy Castro 12 PM
The 16-year-old violinist dazzles by bringing a modern, swinging pop and world feel to her music.

Matuto 3:15 PM
We couldn’t resist bringing them back after Matuto performed two high-energy, sold-out shows at the November fest that had people begging for more.

Kellylee Evans
WHEN: 8:30 PM/10:30 PM
WHERE: Marq’s Pub/Tito’s Stage
Her voice is considered one of the most beautiful of her generation and 2014 looks to be her breakout year with her Motema Music label debut, “I Remember When.”

Johnny Rawls
WHEN: 9 PM/11 PM
WHERE: Carney’s Main Room/Just 4 Wheels
Mississippi-born and bred, he will lay the blues and soul down with butter.

Fredericks Brown
WHEN: 9:30 PM/11:30 PM
WHERE: Boiler Room@Congress Hotel
These two young artists left New Zealand for New York to pursue a common passion for storytelling that delivers a startling blend of strength and intimacy. 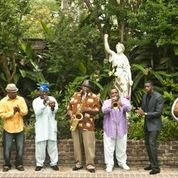 Roberta Gambarini Aleathea’s/CapeMay.com Stage 1pm
After coming in third in the 1998 Thelonious Monk Vocal competition, this Italian singer quickly became a sensation performing with legend Hank Jones among others.