If, as F. Scott Fitzgerald opined, "The rich are different from you and me" (to which Hemingway answered, "Yes, they have more money"), then the self-made, newly rich are truly pieces of work. Keenly aware of how much time and effort it has taken to amass their fortunes, they are often paranoid about the ulterior motives of those who befriend their vulnerable offspring—so protective that they go so far as to derail relationships where they believe money trumps affection.

Taking her cue from Henry James's classic story, Washington Square (recently produced on Broadway as The Heiress), Victoria Stewart has moved the action from the 19th to the 21st century; transformed the domineering father into a driven, monomaniacal (about money) mother; and changed the title to the more modern Rich Girl. Now receiving its world premiere at the George Street Playhouse under the direction of Michael Bloom, the tale survives the alterations that give the it an edgy, sardonic tone wholly appropriate to our time. The result is a clever, sometimes funny, often bitter, rather thrilling study of how money can corrupt even the purest of desires, the longing for love, for men, mothers and money—in that order. 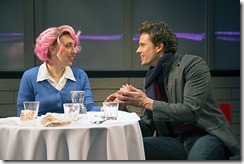 Once again, the title character is a rather plain-looking, socially awkward young woman named Claudine Walker, who stands to inherit an enormous sum of money when her only parent, celebrity financial guru Eve (in the tradition of television's Suzie Orman—who, Stewart avers, was her inspiration) dies, an event not so unthinkable since the woman has battled breast cancer in the past. To their charitable foundation comes Henry, a young theater director, seeking funding for his struggling company. When his request is denied, he mounts a full charm offensive on Claudine, a former classmate at Andover Academy, whereupon she topples head-over-heels in love with the handsome dude. Throwing a wrench in the gears is Eve, who has obvious misgivings about Henry's intentions: Does he really love Claudine, or is he only after her money? Complicating matters is the friendly interference of Maggie, executive assistant of the foundation and Eve's Gal Friday, a part analogous to that of the maiden aunt in the original. (Above: left, Crystal Finn as Claudine meets Tom Roach as Henry in a café.) 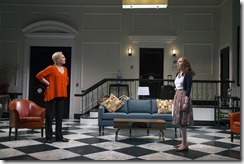 Other than a few scenes in a cafe or television studio, the action unfolds in a magnificent Manhattan penthouse apartment designed by Wilson Chin, complete with soaring windows, a marble checkerboard floor and expensive artwork hung on the walls—truly the domain of a very successful woman. Ultimately, however, the place is hard-edged and cold, just like the personality of its owner, a place where her lonely, sad daughter looks and feels totally out of place. (Above: Dee Hoty and Crystal Finn) 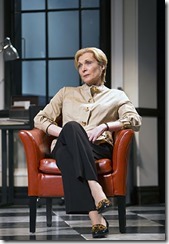 Dee Hoty (right) is superb as Eve, eliciting the right balance of antagonism and sympathy on the part of the audience. She's all business delivering financial advice on television, peremptory and very bossy when it comes to dealing with Maggie and extremely caustic when giving Henry the third degree about his "intentions." Nowhere is there a hint that she cares about Claudine's emotional well-being; in fact, she claims that her daughter "ruined [her] life," but she never says how. Not that it would matter; she has obviously abused her child for years. Breaking up this suspect relationship is nothing more than business to this brittle woman, and we hate her for it. But every once in a while (I wish it were more often), Stewart gives us a glimpse of what made Eve this way, especially her own failed relationship with Claudine's father. It would present Eve as more human than total monster. 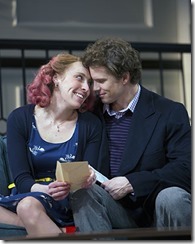 Matching Hoty's performance is Crystal Finn (left) in the role of Claudine. Her initial clumsiness is rather comical, as is her self-denigration, but her elation that Henry loves her is enchanting and, ultimately, heartbreaking for her, and for us. Finn's large, tear-filled eyes provide a window to this young woman's tortured soul and telegraph her pain to the last row of the theater.

The cause of this angst felt by daughter and mother is Henry, played by a rugged-looking, adorable Tony Roach (above: right). Through dramatic irony, the playwright makes Henry's intentions evident to us from the start (and remain suspect throughout the play), even as Roach pours on a boatload of charm to fool Claudine. Unintimidated by Eve, Roach's Henry goes toe-to-toe with her, arguing about the importance of art in society and ultimately calling her a bitch to her face. You want to give him a fist bump for that alone. 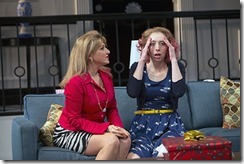 Rounding out the quartet is Liz Larsen as Maggie (left, with Crystal Finn), or as Eve callously calls her, "the help." A busybody of the first order, Larsen navigates the swirling straits among the other three characters, living vicariously through Claudine and helping to make a general mess of things. Larsen's perky, warm personality stands in direct contrast to Eve's and provides Claudine with some semblance of love denied her by the other two.

Basing a play on a previous incarnation has its pitfalls. However, Stewart's changes are appropriate, and she maintains the rising tension through the first act and turns the ratchet up during the second to reach a gripping dénouement. At one point in Act II (no spoiler!), the play teeters on the edge of bathos, but the playwright holds fast to the tone in a satisfying maneuver and dramatic disaster is averted. Of course, Michael Bloom's very firm direction keeps the conflict on course while eliciting terrific performances from four very talented actors. Jennifer Caprio's costumes and Dave Bova's wigs enhance Finn's transformation from ugly duckling (with pink hair) to cool businesswoman as it unfolds before our very eyes and are totally appropriate to the other characters, as well.

Matthew Richards' lighting conveys the passage of time through the apartment windows, and Jill BC Du Boff's choice of incidental music is both edgy and fits the New York "scene."

Most of us don't worry that someone is courting us or our children for their inheritance, but we all are familiar with the need to be loved, whether by a parent or a suitor or a friend. In Rich Girl, Victoria Stewart and the George Street Playhouse present a study of the corrosive effects of money on all our relationships—leading to ultimate impoverishment in the end.

Rich Girl will be performed at the George Street Playhouse, 9 Livingston Avenue, New Brunswick, through April 7th. For performance dates and times and to purchase tickets, call the box office at 732.246.7717 or visit online at www.GSPonline.org.