April 14, 1865. November 22, 1963. September 11, 2001—all watershed events in our nation's history, for at these time points, our nation lost its some of its innocence. The first two involve the assassination of a President; the third made us aware that enemies, vast, global and pursuing ideologies fundamentally different from ours, were plotting against us using terroristic measures.

This fact was reinforced one week after 9/11 when two people at the Florida offices of the National Enquirer newspaper opened envelopes containing deadly anthrax spores, inhaled them and perished. Over the course of the next several weeks, letters containing anthrax spores were mailed to major media outlets (including television anchor Tom Brokaw) and two U.S. senators, killing five people and injuring 17 others. Dubbed "Amerithrax" by the FBI, the ensuing seven-year investigation became "one of the largest and most complex in the history of law enforcement."

The investigation inspired A Person of Interest, a play by Jewel Seehaus Fisher focusing on bioethics and based on historical events (with names and places changed), now receiving its world première at the Women's Theatre Company in Lake Hiawatha as part of its 20th anniversary season. 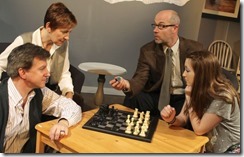 The play involves a self-proclaimed peace-loving, cello-playing microbiologist, Charlotte Hauser, who, with the threat of anthrax poisoning, finds her specialty in infectious diseases suddenly relevant, especially to the Pentagon, who wants her to investigate how anthrax can be "weaponized" with an eye to possibly using it themselves. Egged on by her department chair, former CIA agent Henry Rabin, Charlotte is seduced by the attention and enjoys her new-found celebrity; her husband Bob disapproves of these activities ("This is a murder investigation," he says), causing a rift in their marriage. When the FBI suspects Rabin of sending the letters to jump-start his research and designates him "a person of interest," Charlotte finds her loyalty torn between her longtime colleague and friend and combating this new enemy. (Above L-R: Scott McGowan, Robin Marie Thomas, Craig Zimmerman and Katie Mitchell play chess. Photos by Lauren Moran Mills)

The ideas laid out by the playwright are weighty and serious, but Barbara Krajkowski directs more with an eye to the ninety-minute running time than to worthy deliberation. The cast careens through the dialogue too quickly, leaving the audience no time to digest the ramifications of the dilemmas they face.

The cast of six fares little better. All, except Scott McGowan as Bob Hauser, delivered their lines in an unnatural and unconvincing manner; they never appeared to be having real conversations, a fact reinforced when they stumbled over words and phrases. Most egregious is the interview we hear over the radio between the FBI agent and a reporter; it sure sounds canned. 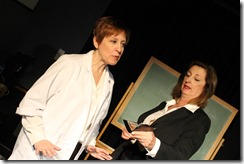 As Charlotte, Robin Marie Thomas (left) was not very credible as an academic scientist, wife or mother; too often her smile undermined the seriousness of her predicament. Too, she spoke quickly and sounded as though she were reciting from a script she had memorized, giving us no time to consider the quandary she finds herself confronting. Craig Zimmerman as Henry Rabin fared little better. He strode around the stage, shouting his dialogue and chopping the air with his palms. Absent a nuanced performance, he really looked like a mad scientist who could be a likely suspect for the crime. Meridith Johnson (above right) as FBI agent Jane Willis, while exuding malevolence, failed to convey an authority appropriate to the situation. She looked uncomfortable onstage and declaimed rather than conversed. As teenage Lynn Hauser, Katie 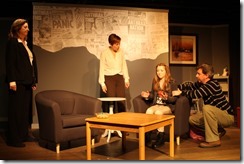 Mitchell (second from right)  inhabited her character pretty well, although she too had problems with natural delivery. As noted, Scott McGowan (far right) convincingly conveyed the dismay felt by Bob Hauser at finding his wife of many years acting more like Dr. Strangelove than his fellow peacenik.

Jonathan Wentz's set utilized the wide playing space to good advantage when scenes move from the university classroom to the Hauser home to a Congressional hearing room. Between scenes Steve Easterling used cello music (often in a minor key) to underscore the seriousness of the conflict, but the voice of the Congressman and the radio interview were too loud and sounded fake.

In its twenty-year history, the professional (Equity-based) Women's Theater Company has given us many fine productions, setting a high bar for itself. Unfortunately, A Person of Interest looks more like a workshop attempt than a finished product. The topic is timely, provocative and important. Too bad the acting fell short.

A Person of Interest will be performed at the Women's Theater Company in the Parsippany Playhouse, 1130 Knoll Road in Lake Hiawatha, weekends through March 30, Fridays and Saturdays at 8 PM, and Sundays at 3 PM; ticket prices are $20 for adults, and $18 for seniors and students. . For information and tickets, visit online at www.womenstheater.org  or call 973.316.3033.