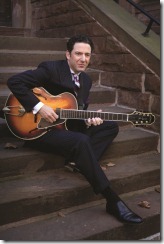 Jazz guitarist, vocalist and bandleader John Pizzarelli returns to Morristown on to perform favorites from the Frank Sinatra songbook including "The Way You Look Tonight," "You Make Me Feel So Young," "Under My Skin" and "Witchcraft."

JOHN PIZZARELLI, the world-renowned jazz guitarist and singer, was called "Hip with a wink" by Town & Country, "madly creative" by the Los Angeles Times and "the genial genius of the guitar" by The Toronto Star. When he performs with his wife, singer/actress Jessica Molaskey, and his father, guitar legend Bucky Pizzarelli, they are labeled "the First Family of Cool" by The San Francisco Chronicle and "the von Trapps on Martinis" by The New Yorker. According to the New York Times, "the Pizzarelli-Molaskey duo is as good as it gets in any entertainment medium."

After his recent smash success with the Boston Pops, he was hailed by The Boston Globe for "reinvigorating the Great American Songbook and re-popularizing jazz." And the Seattle Times called him "a tour de force" and "a rare entertainer of the old school." Before a recent show in the northwest, the local paper quipped "John Pizzarelli is so impossibly cool, he shouldn't be legally allowed to enter Oregon."

Using performers like Nat "King" Cole, Frank Sinatra and Joao Gilberto and the songs of composers from Richard Rodgers, George Gershwin to James Taylor, Antonio Carlos Jobim and Lennon & McCartney as touchstones, John Pizzarelli has established himself as one of the prime interpreters of the great American songbook and beyond, bringing to his work the cool jazz flavor of his brilliant guitar playing and singing.

The Mayo Performing Arts Center, a 501(c)(3) nonprofit performing arts organization, presents a wide range of programs that entertain, enrich and educate the diverse population of the region and enhance the economic vitality of Northern New Jersey. The 2011-2012 season is made possible in part by a grant from the Geraldine R. Dodge Foundation and funds from the New Jersey State Council on the Arts/Department of State. The Mayo Performing Arts Center has been designated a Major Presenting Organization by the New Jersey State Council on the Arts.