REVIEW: “SOMETHING IN THE AIR” @ ALLIANCE REP (EDISON VALLEY PLAYHOUSE)

Sniff. Sniff. Sniff. There's Something in the Air, and it doesn't smell pretty. If it were a perfume, its top note would be Greed, supported by a base note of Selfishness. By the master of relevant comedy Richard Dresser, it's wreaking havoc in a production by Alliance Rep onstage at the Edison Valley Playhouse through October 22.

I don't understand the derivatives or toxic mortgages that ripped our economy to shreds, but I do know that some people in the financial district were placing bets on their failure. As a proxy for this despicable practice, Dresser uses the very last sure-fire investment left on earth: paying the expenses of a terminally ill patient as long as he/she lives in return for being named the beneficiary of the patient's life insurance policy. I don't know if this practice is illegal; if not, it should be. It's ghoulish and heartless,  even moreso if the investor meets his "mark" and develops sympathy (and a quasi-relationship) with him. Then chaos reigns supreme. (Above: Neville convinces Walker to invest in “terminals.”)

When desperate Walker mistakenly visits financial analyst Neville's office seeking psychological help, he's offered the opportunity to invest in the insurance policy of the most terminal "terminal," in this case the bitter travel agent Cram, and collect a big payout when he kicks the bucket. A wrench is thrown in the works when Walker meets and falls for "the very well assembled," rather mysterious Sloane. When Cram seems to get a second lease on life from fighting with his mailman, Walker engages the inept, cheerful twit Nurse Holloway to "help" the man die. This contemporary comedic film noir exposes the selfishness and greed that drives these five people, much to the audience's merriment. (Above right: Nurse Holloway comes to care for Cram.)

Director Michael Driscoll wrings terrific performances out of his talented cast. Of course, the characters aren't supposed to be nuanced; they're more wacky symbols than real people. Through a myriad of scene changes, Driscoll and Stage Manager Bill Van Sant keep the action moving steadily, inexorably to its ridiculous, if inevitable, ending. Kevin Gunther provides a versatile set and Lilli Marques' costumes are appropriate to character and situation. 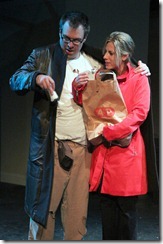 The cast truly acts as an ensemble. John Correll is the embodiment of the pompous, self-absorbed Neville, anxious to snag another investor, yet worried lest a choking man's attire at the country club restaurant get him, Neville, kicked out! Robert Scott Sullivan's depiction of the nebbish-y Walker is winning and infuriating at the same time. Every time he announces that his cashmere coat is really made of the synthetic vechtoline, he brings down the house! He garners our sympathy for he is, at heart, a "good and true" man albeit a bit naive. As the bitter, sweaty, dying Cram, Gus Ibranyi gets to chew up the scenery, legally. Liz Samuel (a Jennifer Aniston look-alike) is a fine Sloane, torn between Walker and Neville and harboring a secret that will blast the scheme wide open. And Kelly Maizenaski's terrific Nurse Holloway is really two people: one an annoyingly jovial dimwit and the other a high-producing account executive in the "terminals" market! (Above left: Walker meets Sloane on the street.)

Although Richard Dresser wrote Something in the Air in 1999, well ahead of the financial crisis, he was prescient—or was he? Perhaps we have been addicted to greed and selfishness all along. It just took some financial hanky-panky to bring out the worst in us. Alliance Rep's production of this off the wall proposition would drive the demonstrators at Occupy Wall Street nuts, as well it should.

Something in the Air will be performed Thursdays through Saturdays at 8 PM and Sundays at 2 PM through October 22 at the Edison Valley Playhouse, 2196 Oak Tree Road in Edison.