That a week doesn't go by when we hear of a wife killed by her jealous husband is testament to the timelessness of Shakespeare's study of "the green-eyed monster," Othello, now onstage at The Shakespeare Theatre of New Jersey. From besotted bridegroom to raging maniac, the Moor's downfall is stage-managed by the brilliant manipulator, Iago, so masterfully performed by Robert Cuccioli that even though we already know the play’s outcome, we are riveted to our seats for the entire three-hour performance. 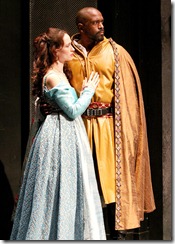 Written in 1604, Othello is usually considered to be about love and jealousy, but Director Bonnie J. Monte has wisely chosen to explore the role played by trust and its betrayal. In this tragedy, everyone trusts someone else and is betrayed over and over. The naval ensign Iago is mightily ticked off at having been passed over for a promotion by his commander Othello in favor of Cassio, despite having served Othello faithfully for years. His ire is roiled even further by his gut feeling that Othello has been fooling around with his wife Emilia. To get revenge on Othello (and Cassio), Iago slowly but surely poisons the minds of everyone, sowing the seeds of jealousy in the inexperienced-at-love Othello, newly wed to the lovely Desdemona, a much-younger woman, out of his class and of a different ethnicity. In the end, all but Iago are dead, and he is led off, refusing to say another word. (Above: Victoria Mack as Desdemona and Lindsay Smiling as Othello) 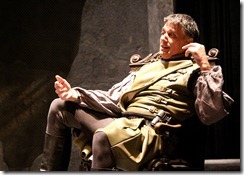 On a spare but serviceable set designed by Bill Clark and atmospherically lit by Steven Rosen, director Monte leads her talented cast through this elaborate dance of trust and betrayal. Lindsay Smiling is a dignified yet conciliatory Othello, sure of himself as the commander of the Venetian fleet but insecure as a lover and a husband. Watching him melt down is painful, given the admiration for him we have from the moment Smiling strides so confidently onstage. And the beautiful cadences of iambic pentameter roll liquidly off his mellifluous tongue, further bewitching us, just as his father-in-law accuses him of doing with Desdemona. As Iago, Robert Cuccioli (above right) may speak in prose, but he lays his intricate plan before us step by step, making us witness to his evil, so that one wants to stand up and tell the others not to believe his lies! It is fascinating to watch his malevolence unfold; he may be the villain of the play, but he certainly is the most interesting character of the lot. Perhaps the real tragedy lies in what he might have become had he not been so vindictive. 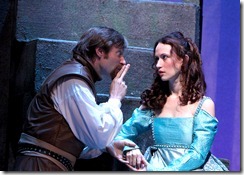 As one of of Iago’s prime “marks,” Matt Bradford Sullivan’s Roderigo is goofy, gullible and dim, all the better to manipulate. Jon Barker starts off rather diffidently as Cassio, delivering orders to Othello about the Turkish fleet approaching Cyprus in such a flat voice that one wonders what the old man saw in him, but his performance picks up once he’s demoted for getting into a drunken brawl. He fights for his reputation, but permits Iago to weave a web of lies to ensnare him further. As Desdemona’s father Brabantio, Bill Christ is the epitome of outrage at his daughter’s elopement, completely missing the irony that it was he who brought the Moor into his home in the first place. (Above: Jon Barker as Cassio entreats Victoria Mack as Desdemona to speak to her husband about reinstating him.)

The women in the cast easily match the men, if not in swagger at least in self-assurance. Victoria Mack is a Desdemona tiny in stature but her passion for her husband overwhelms him and us with its intensity; it makes it hard to understand why Othello doubts her fidelity! Mack’s Desdemona is a woman child, begging Othello to reconsider his demotion of Cassio and cringing in disgust when he calls her a whore. It’s very hard to watch the latter bit of stage business. Jacqueline Antaramian is superb as Emilia, whose actions help bring about the tragic events. She conveys the quandary in which Emilia finds herself: beholden to her husband for everything, unwilling to cross him and awaken his wrath, yet loyal to Desdemona, whom she serves. When she finally realizes her unwitting complicity, Antaramian rises to the occasion and throws Iago under the proverbial bus, even though she knows she’ll be punished one way or another. 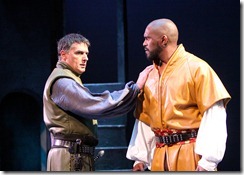 Although he coined many words we still use today, William Shakespeare would not have heard the term psychopath, but he sure recognized the type. Iago is the consummate villain, a man intimate with the “green-eyed monster,” envy, in love with revenge and certainly not caring one whit about the lives he destroys. The Shakespeare Theatre of New Jersey’s current production of Othello (the last was performed in 2003) is proof of the play’s universality, the skill of this theater company and a welcome addition to the local theater scene. It should not be missed.

Othello runs through October 2 at the Shakespeare Theatre of New Jersey on the campus of Drew University, 36 Madison Avenue, Madison. For tickets and information, call the box office at 973.408.5600 or visit online at www.ShakespeareNJ.org