For a critic, summer is like a vacation from school, unlike the rest of the year WHEN openings that seem to occur on the same weekend. It's a time to breathe and, when one has to write a review, to enjoy the break from the dread deadline.

However, summer has another joy: Chatham Community Players' annual production of original one-act plays by New Jersey playwrights, Jersey Voices, which made its 17th appearance this past weekend and will run at the Chatham Playhouse on North Passaic Avenue in Chatham through August 6.

Over those 17 years, CCP has showcased the work of 67 playwrights and 42 directors. From the 130 plays submitted this year, the production team selected 12 for consideration before winnowing down the list to a final six—five plays and one dance number—for production. And while all were interesting, three plays were unqualified successes, and the dance sequence told an interesting, and local, tale through movement and music.

The evening started off with a bang: Mr. X by Susan Barsky and directed by Arnold J. Buchiane. A seedy café provides a meeting place for two men in trench coats engaged in some kind of espionage involving hidden identities and secret codes. Jim Clancy (right in photo to left) is terrific as Man #1, who questions the veracity of Man #2 (who purports to be Mr. X), played by David Hoffman with a jumpiness appropriate to one engaged in a surreptitious endeavor. The conversation whereby #1 attempts to ascertain the truthfulness of #2's credentials is very funny; Clancy retains #1's cool (after all, he has something #2 desperately wants) as he breaks down #2's secretive demeanor, reducing him to beg for the code. The surprise ending truly is a surprise, but necessary if the play is to work. Go find out for yourself; it's hilarious! 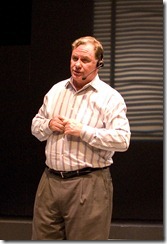 Tom Tunnington's Cold Calling is reminiscent of CCP's recent production of David Mamet's Glengarry Glen Ross, minus the obscenities but starring Robert Mackasek (right), who was so brilliant as George Aranow in that play. Here, he's Knox, a salesman adept at "cold calling," making telephone contact with a name on a list with an eye to getting a "sit down" for the recipient to listen to him pitch his product (never named here). Knox brags of his prowess to the unseen Louie, eventually agreeing to a $200 bet that he can score on the next call he makes. That call will be the greatest pitch he ever has to make. Mackasek is splendid as the blowhard Knox, who becomes more earnest as he spins his shpiel, as he convincingly conducts the phone conversation. Director Joann Lopresti Scanlon directs with a deft hand so the entire encounter sounds and feels natural. 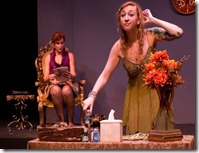 The third knock-out play, Whatever and Delicately by Pia Wilson, is set in, of all places, the ladies' room of an upscale Mexican restaurant where, over the course of less than half an hour, a young drunken patron’s encounter with an immigrant restroom attendant shatters all the prejudices she harbors. Bridget Burke Weiss (photo, left) is fabulous as Yadra, the Mexican attendant, maintaining the woman's dignity and elegance in the face of unkind comments uttered by Lisa, played by Samantha Kaplan (right) as a convincing drunk. Again, over the course of about 20 minutes, Kaplan's character undergoes a sea change, becoming the woman she should have been from the outset, coaxed along by Yadra's astute observations. Talk about conflict so necessary to drama; Wilson's play has it in spades, and Beth Amiano Gleason's impressive direction ratchets up the tension until something's got to give. When it does, the effect is cathartic. 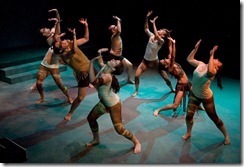 In Dance of the Ahtu, Desireé Caro and Anthony Rubolotta have put together a story in dance that will resonate in Chatham, where the Lenni Lenape Indians once camped on the banks of the Passaic River (so named because it is the "place where the land splits," a valley). Eight supple dancers represent two groups of people, one peacefully worshipping the Ahtu (deer) and the other hunting and killing them. To music by Sigur Ros (Saeglopur), the two tribes meet and cultures collide (above). To find out which one "wins," come see the performance for yourself. The dance sequence really uses movement and music to tell an intriguing story. 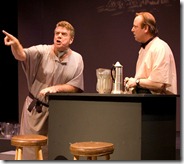 The Canaan Wedding or Disciples Gone Wild, by John P. Dowgin and directed by Jon DeAngelis, features a priest retelling the New Testament story of the wedding at Cana (wherein Jesus miraculously turned water into wine) to his congregation while, simultaneously, an updated re-enactment is taking place in front of him (which he does not acknowledge). The contrast between the priestly demeanor and the raucousness of the frat boy disciples, the harridan Mary, the sweet Jesus and the slippery Judas (he connives to get into the wedding to score some drinks and babes, even though he is uninvited) is very funny. Lou Savarese (photo above, left) is especially droll as the Father of the Bride, arguing with the bartender about charging for drinks or exhorting the bandleader to forego "The Chicken Dance." Stacy Simon is no sweet Madonna; her shriek, "Jesus," will hurt your ears. Playwright Dowgin reminds us that these Biblical figures were real people, maybe even as buffoonish as those depicted here. But don't be offended; it's all in good fun. 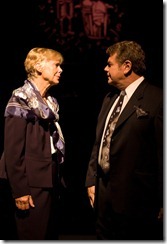 The least successful play of the evening is Forsaking All Others by G. A. Perrie and directed by Loretta Napolitano. On the eve of the rehearsal dinner for Megan and Andrew, the couple's families meet at the catering hall, with dire consequences. The groom's mother Lauren brings her new husband Ken, his father Neil his new girlfriend, Gina Marie. The bride's father is stuck in LA due to bad weather. The most interesting person is Beth Amiano Gleason's low-class bimbo (de tutti bimbini) Gina Marie, she of the overflowing neckline and constant attention to her toilette! Napolitano has directed the proceedings so sluggishly that too many dead spots occur, making the actors awkwardly stand around waiting for something to happen. The dialogue never feels like real conversation; everyone waits until someone else stops talking before beginning to speak! Gleason is the only actor who is convincing and likeable. The play's final moments are its best part, for "secrets" are revealed, except that other than a "dream encounter" (above, Lou Savarese left and Jean Kuras right) that the playwright has not really prepared us for.

Jersey Voices has become a public service of Chatham Community Players, providing budding New Jersey playwrights a chance for their plays to be produced, directors an opportunity to helm a production and actors to depict the characters therein. Kudos to JV's producer Bob Denmark and artistic director Robert Lukasik for bringing us this exciting program.

Jersey Voices will be performed August 4, 5 and 6 at 8 PM at the Chatham Playhouse, 23 N. Passaic Avenue, Chatham. For information and tickets, call the box office at 973.635.7363 or at www.chathamplayers.org/tickets.htm and clicking on TicketLeap.