REVIEW: “THE TALLEST BUILDING IN THE WORLD” @ LUNA STAGE

The suffix -est is familiar to most New Yorkers. In fact you could say it's part of the city's DNA: first (okay, I fudged that one a bit), oldest, newest, largest, biggest (notice I left out smallest) and, of course, tallest.

The last one, tallest, is perhaps the most important for the First City of Skyscrapers, home to at least three so-called "tallest buildings in the world": The Manhattan Company Building (927 feet) and the Chrysler Building (1047 feet), both of which rose in 1929; and the Empire State Building (1250 feet), completed in 1931.

But the public and corporate love affair with height reached its peak in the 1960s with the building of the two World Trade Center Towers, the inception of which is the subject of a riveting play by Matt Schatz, The Tallest Building in the World, now receiving its world première in a splendid production at Luna Stage in West Orange.

While architecture and structural engineering don't seem to be suitable topics for drama, playwright Schatz manages to make the problems posed by both disciplines comprehensible and fascinating. It matters not that we know that the scheme will come to fruition. We experience the conflicts and crises as they occurred in real time (without foreknowledge of their ultimate end), adding to the narrative tension and suspense.

Under Troy Miller's firm direction, the three characters at the center of the plot—an engineer turned Port of Authority bureaucrat, a temperamental architect and a brash structural engineer—come across as three-dimensional human beings, making the drama as much about their interactions and slashes as to whether the towers will rise above the lower Manhattan skyline. We even worry about the outcome of the project! 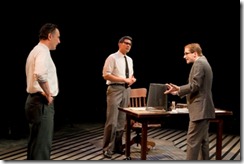 David Bonnano's Gino Rapelli, the P.A. Vice President charged with finding an architect to design the project, morphs before our eyes from the quintessential polished, rather egotistical bureaucrat into an impassioned spokesman for what looks to be an impossible task. He wants the WTC to be "something you can still see when you close your eyes." He beautifully conveys the single-mindedness of his vision while keeping his more difficult colleagues in check and on task. And when he realizes that revolutionary buildings can also be evolutionary buildings, his excitement and belief become palpable! (Right: David Bonanno as Gino, Pun Bandhu as Yama and Kane Prestenback as Lee)

His antagonist (and later, partner) is the reluctant architect Fujiyama, whom Gino calls “Yama,” played with equal parts acerbic arrogance and doubt by Pun Bandhu. Claiming that he is "not a skyscraper designer" and aghast that the project is pegged at 10 million square feet, Yama initially declines, but Bandhu masterfully conveys the ego and artistic vision so necessary to make this project a success. As he works through the process with Gino and, later, the structural engineer, he's alternately likeable and annoying.

Played superbly by Kane Prestenback with spot-on geekiness, the brash young structural engineer Lee is an insufferable know-it-all, someone you'd like to smack. But he holds the key to the project's success: making the tall towers withstand the force of the winds coming off the Hudson River without falling down. His ideas on elevator and lobby placement, the use of an exoskeleton of steel girders to allow for greater floor/office space and the implementation of a damping system to absorb the shock of the building's sway are insightful and intriguing. 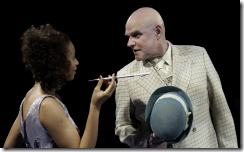 Playwright Schatz has employed several remarkable devices to enhance and extend the plot. These include personifying the Chrysler Building (Nehaissaiu deGannes in a slinky, sequined silver gown) and the Manhattan Company Building (Drew Dix in a sober brown suit with a green bowler hat); deGannes' as various female characters and Dix as Kravitz, the owner of a small appliance store on Radio Row (the site of the twin towers) and later Alan Weiss, owner of the Empire State Building, who campaigns vocally against their erection. (Above: Nehassiau deGannes as The Chrysler Building and Drew Dix as The Manhattan Company Building)

Robert Monaco's minimal set more than adequately transports us to the various locations by way of tables, desks and chairs that roll around on a map of Manhattan Island surrounded by strong lines reminiscent of the vertical lines that were such a strong feature of the WTC's façade. Jill Nagle's lighting effortlessly directs the audience's attention to the action as it moves around the stage, important because the play is performed in the round. This latter fact is adroitly addressed by the actors who often talk directly to the audience; they make sure to turn their attention to all four seating areas without it looking intentional and artificial.

When they were completed, New York Times architectural critic Ada Louise Huxtable called the World Trade Center towers either "the start of a new age or the greatest tombstones in history." Although a plane had accidentally crashed into the Empire State Building in 1945 (it was lost in fog), no one could have guessed that 56 years later, two airliners would deliberately fly into both towers, thus fulfilling the last part of Huxtable's critique. Nevertheless, when I close my eyes, I can still see the two (not twin, as Yama asserts; he designed them to be different) towers on the New York skyline, so I guess Gino was right, too.

The Tallest Building in the World concludes Luna Stage's inaugural season at their new theater in West Orange and does it with style. Plays and performances like this remind us of Luna's strength as a venue for, as their mission statement puts it, "theater that entertains while provoking thought and encouraging dialogue." It's a real local treasure. Don't miss this show.

The Tallest Building in the World will run through May 15 at Luna Stage, 555 Valley Road, West Orange. Performances are Thursdays at 7:30 PM, Fridays and Saturdays at 8 PM and Sundays at 2 PM. Tickets and information are available at the box office (973.395.5551) or online at www.lunastage.org .

All photos were taken by Steven Lawler.