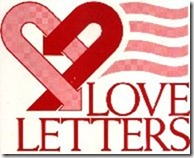 LOVE LETTERS
By A. R. Gurney

The Pulitzer Prize-nominated play,  follows the "near misses" of a relationship through a lifetime of letters between a man and a woman, will feature Pat Sheffield (Montague) and Robert Sackstein (Chester), both CTG veterans. Their friendship unfolds from what is written—and what is left unwritten—in 50 years of letters, from summer camps and boarding schools through college, war, career and relationships.

The review in TIME of the Broadway production called the play "an exquisite jewel of a play....one of the four or five best American plays of the 80's."