“STOMP” STOMPS INTO THE STATE THEATRE WITH NEW SURPRISES!

State Theatre presents STOMP, the international percussion sensation.  From its beginnings as a street performance in the UK, STOMP has grown into an international sensation over the past 13 years, having performed in over 350 cities in 36 countries worldwide. STOMP is part of the State Theatre’s winter festival, Hub City Carnivale, three weeks of performances, activities, and attractions for all ages. Prior to each STOMP performance there will be a FREE chocolate tasting in the State Theatre lobbies, courtesy of Thomas Sweet in New Brunswick (with purchase of STOMP ticket). 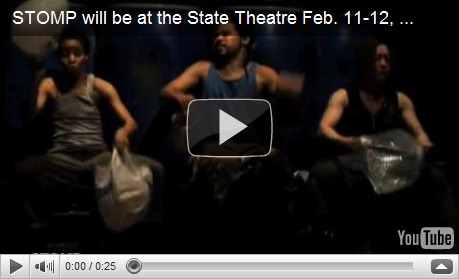 “We’re making STOMP very affordable for all audiences this February. So share this exhilarating show with your whole family!” states Daniel Grossman, Vice President of Marketing at the State Theatre. “Just mention STOMP7 when you call for tickets and you’ll save $7 per ticket. That means Broadway quality close to home for as little as $25 per ticket, or $60 for the best seat in the hall. What a deal!”

STOMP OUT HUNGER! State Theatre in partnership with Elijah's Promise will hold a food drive during the performances of STOMP to benefit the Elijah's Promise Food Pantry in New Brunswick. People can help by bringing in non-perishable food items such as: canned fruits and vegetables, tuna, pastas, rice, and beans when they come to see STOMP. Those who cannot make the show can still drop off food items at the Ticket Office from February 11-13 during office hours.

Critics and audiences have raved: “STOMP is as crisp and exuberant as if it had opened yesterday,” says The New York Times. The San Francisco Chronicle declares “STOMP has a beat that just won’t quit!” The Los Angeles Times exclaims: “Electrifying! Triumphs in the infinite variety of the human experience.” “A phenomenal show! Bashing, crashing, smashing, swishing, banging and kicking—a joyous invention!” says the Chicago Tribune.

The State Theatre, a premier nonprofit venue for the performing arts and entertainment. The theater exists to enrich people’s lives, contribute to a vital urban environment, and build future audiences by presenting the finest performing artists and entertainers and fostering lifetime appreciation for the performing arts through education. The State Theatre’s programs are made possible, in part, by funding from the New Jersey State Council on the Arts/Department of State, a Partner Agency of the National Endowment for the Arts, and contributions from numerous corporations, foundations, and individuals.