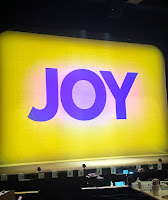 If inventing means “making something out of nothing,” then Joy Mangano has certainly earned the title of “inventor” with an invention that revolutionized housekeeping, specifically, the mundane and usually onerous of mopping the kitchen floor!

Even if you have not used the Miracle Mop, you may be familiar with Mangano from her television appearances on QVC, where she started, and HSN, where she plies the many wares she’s invented or refined since she began (hangers and luggage, to name but two).

Others may know her from the rags-to-riches account of her life popularized in a film titled Joy, upon which the world premiere musical version produced by the George Street Playhouse in New Brunswick is based. With Music and lyrics by AnnMarie Milazzo and book by Ken Davenport (based on Mangano’s book, Inventing Joy: Dare to Build a Brave and Creative Life, the charming musical will run through December 30 at the George Street Playhouse in the New Brunswick Performing Arts Center. 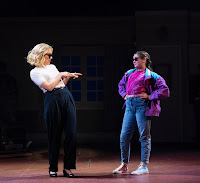 Joy may be divorced from her actor husband Tony, but he still lives in the basement and complicates her life when he “forgets” to pick up their young daughter Christie from school, leaving her stranded so the teacher has to bring her home. Adding to the chaos in the house are her agoraphobic mother Toots (Vicki Lewis) encamped on the sofa watching endless television and her fast-talking, gangster father Rudy (Stephen DeRosa) who shows up, unannounced, on her doorstep looking for a place to flop (he lands in the basement with Tony).

It turns out that, even as a youngster, Joy was into “making something out of nothing,” e.g., a neon dog collar that shines in the dark, so she sees going into her workshop and tinkering with some vinyl pipe and a mop head to invent a cleaning tool that doesn’t make the user have to wring out the dirty water by hand as a way to “change the world.” With financing from her dad’s night club owner girlfriend and an agreement with a guy in Texas to use his very similar patented design, Joy hawks her Miracle Mop at a boat show, local fair, and finally, on QVC. There, she comes up against the “business” of retail TV, learns how to claim her right to the mop patent—and the rest is history!

While the music may not have you humming as you leave the theater, it serves as a wonderful device to reveal character and move the plot along. The opening number, “Welcome to My World,” is a rousing paean to overworked Joy trying to juggle job, family, aging parents and annoying ex, with little time for herself. Another nifty ensemble number featuring the suits at QVC (“We Sell Stories”) conveys the wheeling-dealing of the corporate world. Joshua Bergasse’s agile choreography is especially on point as the characters navigate a stage crowded with people and moving scenery. The bittersweet duet, “Change Forever,” sung by Joy and Tony, expresses very well the grief of divorce while “I Got People” nails the smarminess of Joy’s dad Rudy—a self-deluded wannabe gangster who almost brings her business crashing to a halt. (Click HERE for a video of Erika Henningsen singing "Change Forever")

JOY—the purple capital letters on the yellow curtain telegraph Mangano’s outsized dreams and personality—is played by a feisty Erika Henningsen, whose verve, pipes and dancing ability carry the show. Trent Saunders (right) is perfect as Joy’s would-be actor ex-husband; Sami Bray’s Christie (above, with Henningsen) is a chip off the old block, not above telling her annoying parents exactly what she thinks; and Stephen DeRosa’s oily performance even manages to arouse some sympathy for this ne’er do well who wants to be a somebody. As Toots, Vicki Lewis is annoyingly always underfoot and offering unsolicited advice; when she changes out of that bathrobe into a sparkly frock, she cleans up very nicely! Badia Farha has a nice turn as a QVC assistant assigned to help Joy navigate corporate retail TV; just watch her grow from lowly go-fer to executive before our very eyes! And John Hickock’s Cowboy Eddie is appropriately condescending and misogynistic as one would expect; just watching Joy beat him at his own game is very satisfying!

An amiable show about an attractive woman from suburbia who becomes a power-house television entrepreneur and saleswoman, Joy: The Musical is a welcome addition to the American musical theater canon. With so many people familiar with her from watching a lot of TV, especially during the pandemic lockdown, the show should draw audiences who love musicals and who are especially excited to attend world premieres. Who knows, those of us who travel to New Brunswick may be able to say, “I saw it first,” when it goes to Broadway and is considered for a Tony Award. You won’t want to miss it!

Joy will run through December 30 at the Elizabeth Ross Johnson Theatre in the New Brunswick Performing Arts Center, 11 Livingston Ave., New Brunswick. For information and tickets, call the box office at 732-246-7717 or visit www.georgestreetplayhouse.org online.