Under the baton of Music Director Michael Shane Wittenburg, the chorus will perform a wide variety of holiday music including Sondheim! A Choral Celebration featuring the best-loved songs of Stephen Sondheim, Magnificat by John Rutter, and Hanukah Fantasy which combines popular Hanukah tunes with other beautiful Hebrew melodies. The chorus will once again ask the audience to join for a sing-along and the concert will conclude with the “Hallelujah Chorus” from Handel’s Messiah.

The popular group Express Male will also perform several songs including “Mary Sat A-Rocking,” “While Shepherds Watched Their Flocks,” “Mary, Did You Know,” Thirty-Second Merry Christmas,” and the hit “Believe” from The Polar Express. 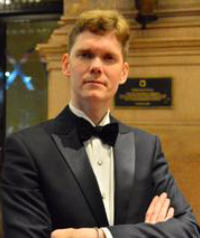 Michael Wittenburg is only the fourth Musical Director in the organization’s long history, and he is not only a popular conductor but an accomplished musician. Hailed as a “real virtuoso” by the great classical pianist Ruth Loredo, Mr. Wittenburg is active with many organizations. In addition to his leadership for the Morris Choral Society, he serves as Director of Music at Christ Lutheran Church of Paramus and Chorus Master for the New Jersey Association of Verismo Opera. A graduate of the Interlochen Arts Academy, he earned degrees from the Eastman School of Music and from the University of Tennessee at Chattanooga. He has been recognized with prestigious awards including the Osher Scholar Prize from the internationally known Pierre Monteux School for Conductors and Orchestral Musicians. He is also very much in demand as a guest artist and most recently performed as part of the Allentown Symphony’s New Music program.

“It is an honor to be the Music Director for the Morris Choral Society,” said Mr. Wittenburg. “This holiday concert has been a mainstay of our season and everyone will really enjoy it. We have a great group of singers and they have worked hard to prepare for this program.”

The accompanist for this concert will again be Jennifer Yang. An accomplished pianist and organist, she holds degrees from Yonsei University in South Korea and from the Westminster Choir College in Princeton. She performs solo recitals, chamber concerts, and choir concerts around the world and serves as the organist for the Morristown United Methodist Church on the Green.

Celebrating its 50th anniversary, the Morris Choral Society has been recognized by Morris Arts as an Outstanding Arts Organization and has performed alongside many famous musicians including jazz legend Dave Brubeck and singer Judy Collins. In addition to performing for enthusiastic audiences in New Jersey, the chorus has toured England, Scotland, Wales, Ireland, France, Italy, Germany, Poland and the Czech Republic. Funding has been made possible in part by Morris Arts through the New Jersey State Council on the Arts/Department of State. Donations to the chorus are always welcomed.

The Chorus also performs as a guest of the Hanover Wind Symphony on Sunday, December 11, at the Memorial Junior School in Whippany. The concert begins at 3:00 p.m.