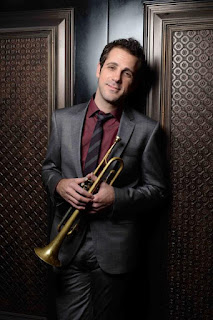 WHEN: January 14 at 8:00 pm
WHERE:  Sitnik Theatre of the Lackland Performing Arts Center on the campus of Centenary University at 715 Grand Avenue, Hackettstown, NJ.
TICKETS: $15.00 to $25.00.
For more information, or to purchase tickets, visit centenarystageco.org or call the Centenary Stage Company box office at (908) 979-0900.

Trumpeter Dominick Farinacci has performed in more than 120 cities in 14 countries around the world and was named the very first Global Ambassador to Jazz at the Lincoln Center by Wynton Marsalis. He graduated from The Julliard School in 2005 and launched his career in Japan with a prolific run of eight albums, later releasing four more globally. His most recent recording “Short Stories” is produced by four-time Grammy Award winning producer, Tommy Lipuma. Music icon Quincy Jones says of Dominick’s accomplishments in performance, recording, education and advocacy, “This kid is 360 degrees!”

The Centenary Stage Company box office is open Monday through Friday from 1:00-5:00 pm and two hours prior to performances. The box office is located in the Lackland Performing Arts Center on the campus of Centenary University at 715 Grand Ave. Hackettstown, NJ. Centenary Stage Company can also be found across social media platforms; Instagram, TikTok, Facebook, and Twitter. Like and follow to receive the latest in CSC news and special offers.