Upcoming Shows at the Sieminski Theater Will Get You in the Holiday Spirit! 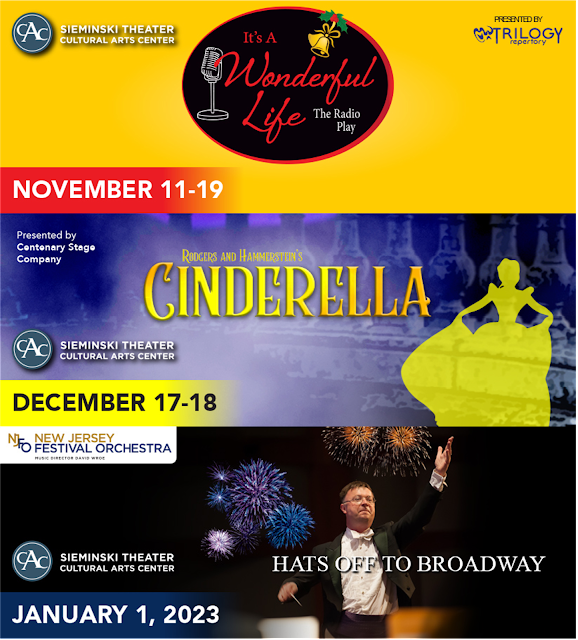 WHERE: Sieminski Theater, 8000 Fellowship Road, Basking Ridge
Tickets for all shows are available online at www.sieminskitheater.org or by phone at 908-580-3892.
Trilogy Repertory Theater presents
It’s A Wonderful Life
WHEN: November 11, 12, 18, and 19 at 7:30 PM and 13 at 2:30PM
Usher in the holiday season with this beloved American holiday classic that comes to captivating life as a live 1940s radio broadcast. With the help of an ensemble that brings a few dozen characters to the stage, the story of idealistic George Bailey unfolds as he considers ending his life one fateful Christmas Eve.

Centenary Stage Company presents
Rodgers and Hammerstein’s Cinderella
WHEN: December 17 at 7:30 PM and 18 at 2:30 PM
A new Broadway adaptation of the classic musical, this contemporary take on the classic tale features Rodgers & Hammerstein’s most beloved songs, including “In My Own Little Corner,” “Impossible/It’s Possible” and “Ten Minutes Ago,” alongside an up-to-date, hilarious and romantic libretto by Tony Award nominee Douglas Carter Beane.
Originally presented on television in 1957 starring Julie Andrews, Rodgers & Hammerstein’s Cinderella was twice remade for television, first in 1965 for Lesley Ann Warren and again in 1997, featuring Brandy and Whitney Houston. The original Broadway production of Rodgers + Hammerstein’s Cinderella opened in 2013. Don’t miss this fun-filled family musical, perfect for the holiday season!

To celebrate the New Year, NJFO presents
Hats Off to Broadway!
WHEN: January 1 at 2:30 PM
NJFO’s quintessential New Year’s celebration is back with a superb revue of Broadway classics in glorious symphonic splendor. Come join the festivities as Maestro David Wroe and soloists direct from the Broadway stage swing to favorites from America’s Great Songbook.

Enjoy an exceptional preshow dining experience in our Wilson’s Tapas Bar Lounge restaurant before our evening performances. Culinary dishes prepared by Fellowship Village’s award-winning executive chef feature only the freshest ingredients and highest quality. Dinner and two drinks are $59.99 per person plus tax and 20% service charge. Make a reservation by calling 908-580-3818 for 5:30 pm seating on the day of the performance.

Masks must be worn in the theater and the common areas.

About the Sieminski Theater: Bringing a professional performing arts venue with a diverse lineup of entertainment to Basking Ridge and the surrounding communities makes the Sieminski Theater and Somerset County an artistic and cultural destination. We enjoy a newly expanded performance schedule from American Theater Group, Light Opera of New Jersey, New Jersey Festival Orchestra, Trilogy Repertory, and countless national touring groups. Our intimate 257 seat award winning venue features technical amenities that rival any Broadway theater. Visit us at www.sieminskitheater.org to view our upcoming entertainment schedule, where any seat, is the best seat in the house.
Posted by Ruth Ross