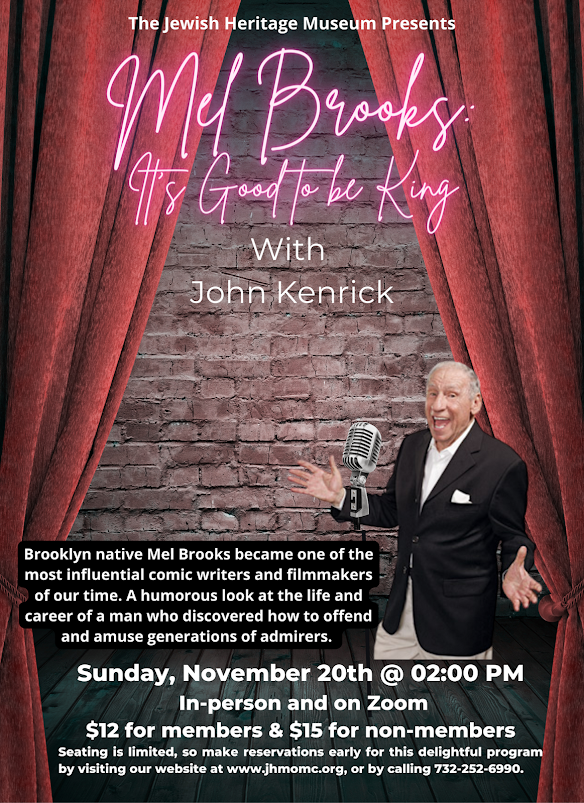 The Jewish Heritage Museum of Monmouth County presents:
Mel Brooks It’s Good to be King with Broadway and TV historian John Kenrick
WHEN: Sunday, November 20th, 2022 @ 2:00 PM
WHERE: The Jewish Heritage Museum is located in the Mounts Corner Shopping Center, at 310 Mounts Corner Drive, Freehold, NJ, at the corner of Route 537 and Wemrock Road (between the CentraState Medical Center and Freehold Raceway Mall). It is on the second floor of the historic Levi Solomon Barn and on Zoom
ADMISSION:  $10 for members and $12 for non-members.
For more information or to make a reservation, please call the Museum at 732-252-6990 or visit our website at http://www.jhmomc.org.
Brooklyn native Mel Brooks became one of the most influential comic writers and filmmakers of our time. A humorous look at the life and career of a man who discovered how to offend and amuse generations of admirers. Mel Brooks has directed several classic film comedies, including The Producers, Blazing Saddles, and Young Frankenstein.

Brooks has earned an Academy Award and Multiple Emmy, Grammy, and Tony Awards.

John Kenrick has worked in the theatre at every level from amateur to Broadway, eventually serving as personal assistant to Tony Award winning producers, including the team behind the original production of RENT. He is the creator of the educational website Musicals101.com, and his books include Musical Theatre: A History, which recently received a new 10th Anniversary edition.

The JHMOMC is a tax-exempt organization under Section 501 (c)(3) of the Internal Revenue Code. Now open to visitors by appointment, the Museum is
handicapped and assistive-listening accessible. Masks and vaccinations are required.

The Museum’s Board of Trustees denounces racism and all forms of violence against any group, ethnicity, or race, and stands in support of any targeted community.
Posted by Ruth Ross