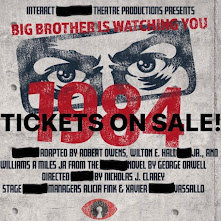 Recently, the term Orwellian has found its way into our political vocabulary. Having used George Orwell’s dystopian novel 1984 (along with Brave New World and The Handmaid’s Tale) in my high school senior English classes, I was looking forward to seeing the dramatized version mounted by interACT Theatre Productions last Sunday at the Burgdorff Cultural Center in Maplewood. In the past, I have reviewed several musical productions by this troupe, so I was curious to see what they would do with a dramatic play.

Written in 1948, three years after the end of World War II, Orwell’s novel—and the play—are set in an imagined future, the year 1984, when much of the world has fallen victim to perpetual war, omnipresent government surveillance, historical negationism and propaganda. Great Britain has become a province of the totalitarian superstate Oceania, ruled by the Party, who employ Thought Police to persecute individuality and independent thinking. Big Brother, the dictatorial leader of Oceania, enjoys an intense cult of personality, manufactured by the Party's excessive brainwashing techniques. Protagonist Winston Smith, a diligent and skillful rank-and-file worker at the Ministry of Truth and Outer Party member, secretly hates the Party and dreams of rebellion. He expresses his dissent by writing in a diary, later enters a forbidden relationship with Julia/Jules, a member of the Thought Police, and starts to remember what life was like before the Party came to power. 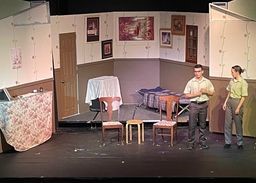 Director Nicholas Clarey faces a monumental task martialing fourteen actors around the stage. Involving the task of establishing the setting, the first act got off to a slow start and limped along until the fifteen-minute intermission; the pace of the second act picked up as complications arose and webs were spun. One thing that may have slowed down the pace is the rather complex stage set: side panels of the stark original venue, the offices of the Ministry of Truth have to be maneuvered by stagehands to reveal a bedroom (left: David Toledo and Hannah Gaston in Winston's flat) and a living room on each side of the stage. Multiple scene changes meant that a lot of precious time was spent on this task, causing the play to run a little longer than two hours. 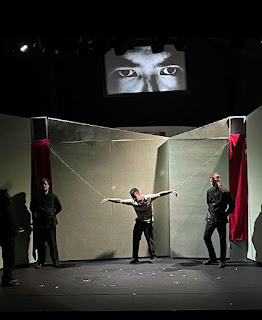 The three actors portraying the three main characters tended to either speak too softly to be easily understood or act very dramatically in a manner that didn’t feel very convincing. When we first meet David Toledo (Winston Smith) he acts like an automaton, with nary a clue that he is a rebel. In Act II, however, he seemed to find his characters. His screams were unnerving and aptly conveyed the pain and fear experienced by one undergoing torture. Hannah Gaston (Jules) barked most of her dialogue; her declaration of love for Winston came out of left field and felt rather frenzied. And as O’Brien, a member of the Inner Party who poses as a member of the counter-revolutionary resistance to catch Winston Ronnie D. Carney uses his imposing stature to intimidate Winston and Jules, but his pompous, loud delivery feels “off” for a man who is supposed to be a spy.

Supporting actors don’t do much better. Melyssa Searcy’s Landlady feels like a caricature; Johanna Erickson (Coffee Vendor) is, perhaps, a tad overly cheery; Jennifer Howald’s Parsons, Winston’s co-worker, is a loudmouth incarnate, and as Syme, who is working on a NewSpeak dictionary, Robert MacLachlan is appropriately officious and full of himself. I found myself wishing that these actors could have dialed down the volume and made these characters feel a bit more human—even if they have been brainwashed.

Pierce V. Lo’s Big Brother, the villain of the play, is ever-present on a screen above the stage that showed only his eyes. When he appeared, his rather small stature reminded me of the real Oz in The Wizard of Oz, a little man with a loud voice and an outsized presence. Even if it is a feature of casting, it is a nice touch to drive home the idea that evil comes in all sizes and a small villain should not be dismissed!

Maryann Galife Post has dressed the cast in appropriate and evocative costumes: drab uniforms contrast with the brightly colored floral dress Jules dons covertly in her romantic scene with Winston. Ditto the loud dressing gown O’Brien wears when he welcomes the couple into his home in the hope of entrapping them. It’s a good way to show that he is not one of them, that he is a man with more freedoms than they will ever have, that he is a man to be leery of.

Joanna Erickson’s lighting is atmospheric—very bright for the Ministry of Truth, more subdued for Winston’s flat. Danny Viola’s sound design is suitably jarring: each announcement is preceded by a screeching noise, and the sound of rats is terrifying.

I wish I could have written a more glowing review of interACT’s production of 1984. The script, adapted by Robert Owens, Wilton E. Hall, Jr., and William A. Miles, Jr., is a challenging one, with lots of action and ideas thrown about. It is billed as being appropriate for middle/high school students and community theaters. This production lacks authenticity and convincing performances, which is a pity because the play’s message is one that resonates all too loudly today.

1984 will be performed at the Burgdorff Center for the Performing Arts, 19 Durand Road, in Maplewood, weekends through October 22. Performances are Friday and Saturday evenings at 7:30 PM and Sundays at 4 PM. For information and tickets, visit 1984 - interACT Productions online.