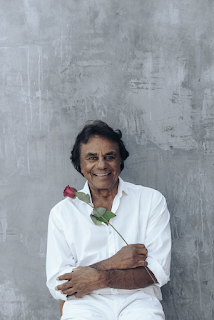 Best-known for his supremely popular hits like “Chances Are,” “It's Not for Me to Say,” and “Misty,” Johnny Mathis has recorded close to 80 albums, six Christmas albums, and has sold millions of records worldwide. During his extensive career he has had three songs inducted into the Grammy® Hall of Fame, achieved 50 Hits on Billboard’s Adult Contemporary Chart, and ranks as the all-time #6 album artist in the history of Billboard’s pop album charts. He has received five Grammy® nominations, and in 2003 was given the Lifetime Achievement Award from the Academy of Recording Arts & Sciences. His 1958 album Johnny’s Greatest Hits started the music industry tradition of “Greatest Hits” albums, which is noted in Guinness Book of World Records for a nearly 10-year run on the Billboard Top Albums Chart.

In addition to all this Mathis and his music have appeared in numerous films and TV shows, including The Tonight Show, Silver Linings Playbook, Family Ties, Criminal Minds, Gremlins, Mad Men, and Close Encounters of the Third Kind, just to name a few. In 2017, he released his 78th studio album titled Johnny Mathis Sings The Great New American Songbook, and debuted his two “lost” albums—I Love My Lady produced by Nile Rodgers and Bernard Edwards of the pivotal group CHIC; and The Island with Sergio Mendes. Mathis continues to be Columbia Records longest signed recording artist.

Gary Mule Deer’s comedy and music have set him apart as one-of-a-kind. He has performed on nearly every major concert stage in the country and made over 360 television appearances, with many on both The Tonight Show and David Letterman. He was one of six comedians, along with Jay Leno, to star on the first HBO® Comedy Special, was the comedy host of Don Kirshner’s Rock Concert for four years on NBC, and a series regular on Make Me Laugh. He is currently featured on the DVDs Jeff Foxworthy’s Comedy Classics and The World’s Greatest Stand-up Comedy Collection. He is one of the most played comedians on Sirius XM’s Laugh USA.

Deer appears regularly on the Grand Ole Opry. And in a career spanning over five decades, he has shared the stage with more than a hundred music legends. He has performed everywhere from Carnegie Hall to Royal Albert Hall and has been part of the Johnny Mathis show as Special Guest since 1994 in major venues across the country.