Bergen County Players (BCP), one of America’s longest-running little theater companies, will open its 90th season with one of the most ambitious productions ever mounted by BCP 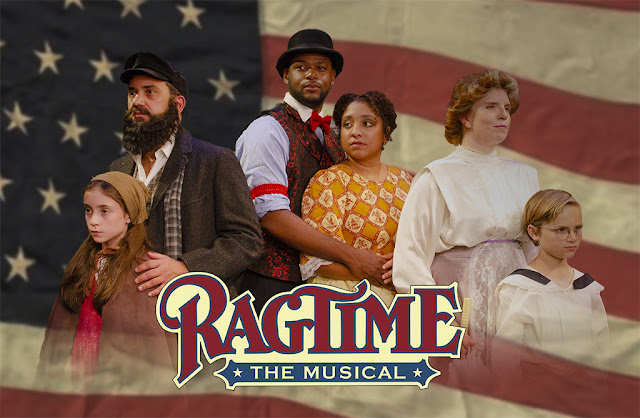 Nominated for 13 Tony Awards®, and winning for Best Original Score, Best Book of a Musical, and Best Orchestrations, Ragtime: The Musical was called by Time Magazine "A triumph for the stage," and by the International Herald Tribune "the best musical in twenty years."

Based on the best-selling novel by E.L. Doctorow, this acclaimed sweeping musical tapestry is filled with pageantry, emotion, and hope, bursting onto the stage like no other musical. Ragtime: The Musical tells the story of three families trying to find their way during the turn of the twentieth century in New York City; each struggling with the changing cultural climate in America and each facing the promise of hope and new beginnings in the midst of prejudice and bigotry. A stifled upper-class wife, a determined Jewish immigrant and a daring young Harlem musician are each united by their courage, compassion and belief in the promise of the future. Together, they confront history's timeless contradictions of wealth and poverty, freedom and prejudice, hope and despair... and what it means to live in America.

Written by the award-winning composer/lyricist team of Stephen Flaherty and Lynn Ahrens (Once on This Island, Seussical and Anastasia), noted playwright Terrence McNally (The Full Monty, Kiss of the Spider Woman, Catch Me If You Can), Ragtime: The Musical will bring together a multi-ethnic cast of characters, portrayed by both BCP veterans and newcomers alike who together will bring the show to life with enthusiasm and ardor.

Ragtime: The Musical is directed by BCP Life Member Larry Landsman of Wyckoff. Larry has directorial credits ranging from musicals (The Music Man, The 25th Annual Putnam County Spelling Bee, Into the Woods, The Full Monty), to plays (A Few Good Men, Lost in Yonkers, Accomplice), as well as numerous live radio broadcasts. BCP audiences have enjoyed his performances in Art (Perry Award, Outstanding Actor in a Play), Oliver!, Lend Me a Tenor, and Laughter on the 23rd Floor, to name a few. Larry is the president of AEP Media, a full-service television production company.

“We’re thrilled to be producing one of the most ambitious projects in our history”, says Landsman. “Ragtime has everything you could hope for in a musical — a soaring, extraordinary score, a timely story about immigration and what it means to be an American, and characters that we can both root for and identify with.” Landsman continues, “This year marks the 25th anniversary of Ragtime’s Broadway premiere and yet, like all great masterpieces, it remains just as thrilling and moving as it did when it first opened. While Ragtime deals with social inequality in the United States at the turn of the twentieth century, the show remains relevant today as we struggle to instill American ideals of fairness and justice in our society and institutions.”

Acting on its desire to keep its members and patrons safe, new and upgraded MERV filters have been installed on all HVAC (Heating, Ventilation and Air Conditioning) units, as well as UV lights on all HVAC units to help eradicate airborne pathogens. Bergen County Players strongly encourages its patrons to be vaccinated for Covid-19 but will not require proof of vaccination in order to enter the building. The use of face coverings/masks is also very strongly recommended.  Reminders of that recommendation will be visible throughout the facility and stated by our Front-of-House staff before each event.

Further information can be found at www.bcplayers.org

The Bergen County Players, Inc. is a non-Equity, non-profit community theater company dedicated to presenting quality productions for the enrichment of the community.