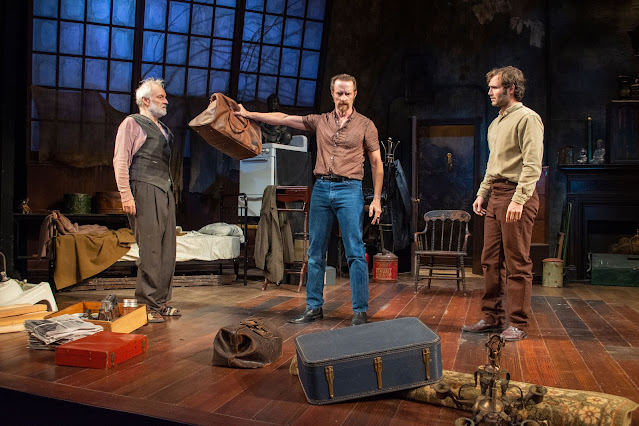 By Ruth Ross
Playwrights, from Sophocles (Oedipus) to Shakespeare (Hamlet) to Arthur Miller (Willie Loman in Death of a Salesman), have grappled with the problem of identity: “Who am I?” and “Is the person I think I am the same individual that others see?”
In his dramatic comedy, The Caretaker, running now at the F.M. Kirby Shakespeare Theatre in Madison, British playwright Harold Pinter’s three characters confront this existential question by talking incessantly about who they are, perhaps, to quote Pinter, as a “constant stratagem to cover nakedness”—the nakedness of their souls, the emptiness of their existences.

A taut, riveting tale of a homeless man and two brothers who give him shelter, The Caretaker is a gripping night of provocative theater. A psychological study of power, allegiance, innocence and corruption, it draws the audience into a compelling and mysterious world, where an unsettling and ever-shifting struggle plays out amidst a strange domestic scenario within the walls of a “home” that is as threatening as it is fragile. 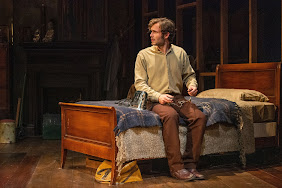 As Aston, the trusting, rather naïve brother who brings the homeless man home, Isaac Hickox-Young (right) fiddles with an electric plug and dreams about building a shed out of “good wood,” but his one very long speech reveals a past ravaged with mental illness, involuntary hospitalization and electric shock treatments that have left him childlike and unable to maintain his balance. He moves slowly, deliberately and carefully, and even his handsome face bears the effects of his brutal treatment. It’s heartbreaking to watch Hickox-Young’s character wrestle with his inarticulation and isolation. 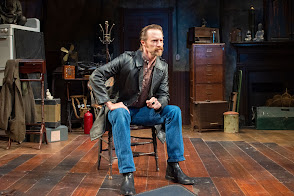 Ashton’s younger brother, Mick, the owner of the building in which he lives, is portrayed by Jon Barker (left) as a sometimes-menacing blowhard who boasts about the van he owns. He’d rather be out furthering his career than caring for his damaged brother. Sometimes dancing around the stage like a fighter, Barker’s Mick is tightly wound, ready to explode. Indeed, his monologue outlining his decoration of a penthouse like a “palace” is both farcical and manic. He is clearly a man who has not fulfilled his ambitions and seems to be flailing around trying to find his place in the world. 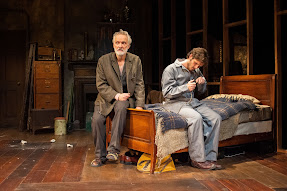 Davies, the man Aston brings home, is quite a handful. In a tour de force performance, Paul Mullins (right with Hickox-Young) manages to make him maddening and lovable at the same time! His wily manipulation of the two brothers, his racism and constant complaining about things he’s been are hard to take; the man’s shifty eyes and constantly changing stories make one wonder why he is allowed to stay for two weeks when the initial offer was for one night! Evidently, he’s pretended to be someone else for so long that, at times, he doesn’t appear to know who he really is. He talks a good line about “getting down to Sidcup,” the past location of a British Army records office, to get his identity papers, but he’s too lazy to accomplish that task.

Bonnie J. Monte has directed The Caretaker with a tight grip on the pace of the action so that it smolders for most of the play ... until it explodes. Sarah Beth Hall’s dreary set (top) is the perfect canvas on which the plot unfolds: as decrepit as Davies, as confused as Aston, it’s a mish-mosh of cast-off stuff—appliances, luggage and lumber—mirroring the cast-off souls who live there. Matthew Adelson’s atmospheric lighting and Karin Graybash’s sound (that dripping water!) really enhance the depressed, hopeless mood. And Monte’s costumes suit each character very well, from Davies’ taped-together shoes and ratty suit to Aston’s boyish cap to Mick’s dude-like leather jacket. And dialect coach Julie Foh is to be commended for getting the actors to speak in convincing Cockney (Mick), British (Aston) and Welsh (Davies) accents.

So, what’s the meaning of the title? Well, separately, both brothers offer Davies the position of building caretaker, which he declines. And while Mick may not want to be the caretaker for his disabled brother, he steps up when Davies calls Aston a “nutjob.” Thus, inadvertently, Davies acts as a “caretaker” who brings the two brothers closer together by the end of the play.

That event highlights one of the play’s important themes: family relationships. Other themes include isolation, physical, emotional and mental; the inability of people to communicate with each other because of their own insecurities and concerns; and, perhaps most importantly, the characters’ proclivity for deceiving others and themselves. And this, of course, echoes the problem of identity that has concerned dramatists since the beginning of theater.

Brilliantly acted, tautly directed and beautifully staged, The Caretaker is a worthy addition to the Shakespeare Theatre of New Jersey’s 60th Anniversary Season. Although production was planned before COVID-19 hit, its themes have been made even more relevant by the pandemic’s social distancing and isolating, disorienting lockdowns. Written in 1959, The Caretaker continues to speak to us today, even as do Sophocles, Shakespeare, Arthur Miller!
The Caretaker will be performed at the F.M. Kirby Shakespeare Theatre, 36 Madison Ave., on the campus of Drew University in Madison, through October 9. For tickets and information, call the box office at 973.408.5600 or visit ShakespeareNJ.org online.
NOTE: Masks are not required, but there are some Mask Only performances for those who may be leery of crowds. STNJ is back and needs your support, so find a performance at which you’ll be comfortable and come!
Posted by Ruth Ross