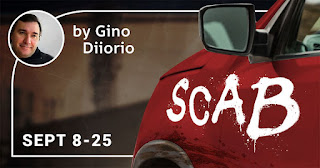 In common labor parlance, a “scab” is someone who “crosses a picket line of workers striking for better pay, benefits or unsafe conditions.” But Merriam-Webster Dictionary also defines a “scab” as “a worker who accepts employment or replaces a union worker during a strike.”

It is the latter definition playwright Gino Diiorio uses in his taut drama, Scab, which opened at Premiere Stages last Thursday night and will run through September 25. Given that Premiere Stages is one of a pair of local theater troupes that product gritty, socially relevant plays so well, even more reason to head down to Kean University in Union to catch this premiere production before it closes. 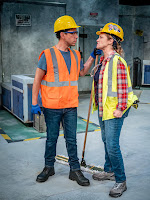 In 2018, when her paper goods factory closes its Northeast U.S. site to move operations to Mexico, middle-aged shop foreman Gilda must train Eduardo, the young Mexican man who will replace her. For this, the company is to pay her $10,000: $5,000 for the training, with another $5,000 to be paid if he successfully completes his first two weeks on the job. Over the course of one week, these two disparate human beings find that their assumptions of personal expectations and cultural differences are not always correct.

The unusual playing space of the Bauer Boucher Theatre Center transports the audience to an imagined venue and conveys an immediacy that involves us in the action. For 90 minutes, the action unfolds on a dingy, dusty, decrepit factory floor designed by Ashley Basile and lit by Zack Gage; Nathan Leigh’s sound design aptly conveys the din of machines on their last legs cranking out paper products—all add to the setting’s verisimilitude! It’s also worth mentioning that Leigh’s use of union songs (“The Union Train Is Coming,” Pete Seegar’s rendition of “Union Men Be Strong” are but two) before the play begins really sets the mood. 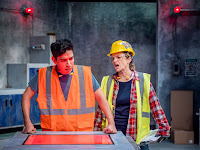 Once again, Director John Wooten elicits tight but very natural performances from two very talented actors. Events proceed at such an inexorable pace that I found myself sitting on the edge of my chair, waiting for something momentous to happen (no spoilers). Monica Wyche portrays Gilda as a tough but down-on-her-luck bird, raising a daughter alone and forced to take side jobs to supplement her foreman’s salary. She really needs the money this job will pay her; she’s even ready to face the inevitable disapprobation and violence from her fellow workers. Clueless about someone from another country, she talks very loudly and slowly to Eduardo when she first meets him, thinking that doing so will make him understand better, and her ignorance is evident when she constantly calls his language “Mexican”; he patiently corrects her that it’s “Spanish.” Gilda’s discomfort at losing her job and all that’s been familiar to her is palpable in Wyche’s masterful performance. 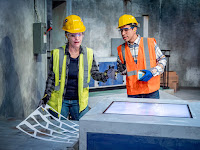 John Anthony Torres’ turn as Eduardo is equally as fine. He may not understand the American idioms Gilda tosses around, but he’s interested and eager to learn. He anxiously looks around the unfamiliar room as she goes over his application, feels bad when he realizes he’s taking her job and bursts with pride as he shows her photos of his wife and daughters—all of which humanize the character and elicit our sympathy for him too. And he dashes the myth of the stupid Mexican worker when he recites Longfellow’s poem, “The Blacksmith” and talks lovingly about his father, despite their fraught relationship.

It’s worth noting that Wyche and Torres turn in an ensemble performance, a partnership so real that we feel personally involved in their lives and find our prejudices falling away at the same time theirs do. Karen Lee Hart dresses the two in appropriate work clothes: plaid shirt, jeans and work boots for factory veteran Gilda and tee shirt and black pants for new worker Eduardo. Props—hard hats, goggles, gloves and paper goods—assembled by Shannon White enhance the theatrical experience.

Gino Diiorio has infused Scab with so much humanity and poignancy that our own reactions to the news of a factory’s relocation to Mexico, leaving American workers out of jobs, undergo a transformation. It’s hard to hate the replacement workers, who will be working for half of the American workers’ salary while managing twice the number of machines. Indeed, the difference between the two workers is stark: American workers dream of moving up the ladder to positions with better pay while the Mexican workers, who are poor, are satisfied with low expectations. The playwright skillfully uses conflict, the basis of drama, bring about not only a transformation of the characters’ relationship but the audience’s as well.

If you are a fan of real-life, salt of the earth, gritty drama—and even if you just like fine theater—you will not want to miss Scab. That this play was a finalist in the 2020-2021 Premiere Play Festival is reason enough to go see it, but given its relevance, fine acting, consummate directing, terrific production values, it’s something you’ll be talking and thinking about long after the stage lights have come down.

Scab will be performed at the newly renovated Bauer Boucher Theatre on the campus of Kean University, 1000 Morris Ave., Union, weekends through September 25. Performances are Thursdays and Fridays at 8 PM, Saturdays at 3 PM and 8 PM, and Sundays at 3 PM. For information and tickets, call the box office at 908.737.7469 or visit online at www.premierestagesatkean.com