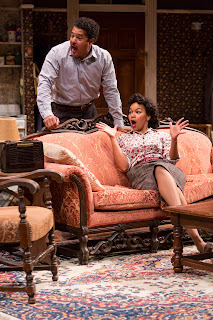 Single tickets for Two River Theater’s 2022/2023 season will go on sale Tuesday, August 16. This exciting and thought-provoking theatrical season will feature world premiere work as well as plays by some of the American theater’s most lauded talents.

Artistic Director John Dias says, “Each of these plays involves a work of art—painting, sculpture, poetry, or music—and celebrates the transformative power of artists to provoke and stimulate, to make us laugh and rejoice, to help us grieve and heal, but mostly to bring us together to affirm our common humanity.”

Wine in the Wilderness, written by the trailblazing playwright Alice Childress, and directed by Obie Award-winner Brandon J. Dirden opens the season in October, followed by a darkly funny world premiere of Living and Breathing by Mando Alvarado, which was part of the 2019 Two River Theater Crossing Borders Festival.

To accompany the season, Two River’s popular series, “Inside Two River” returns with a batch of exciting events, including book discussions, a Paint and Sip, a Cuban music dance party and much more!

Full details on the subscription series can be found below and by visiting tworivertheater.org.

As an uprising rocks his Harlem neighborhood on a hot summer night, artist Bill Jameson is more focused on finishing his latest work: three paintings representing three types of Black womanhood. More than his artistic vision is challenged by the arrival of an unexpected muse, who refuses to be bound by his shallow assumptions of all that Black womanhood can be. This reflection on how art truly reflects life is directed by Obie Award-winner Brandon J. Dirden (Director of August Wilson’s Radio Golf and King Hedley II) and features Crystal Dickinson (A Raisin in the Sun, August Wilson’s Seven Guitars). Sponsored by Bank of America.

The impulsive purchase of some provocative art – a living Latino man who is paid to behave as a statue – shatters a multi-ethnic friend group by sparking questions of commodification, stereotypes, and complacency. While the validity of the artist’s vision might be up for debate, one thing is undeniable: the friendship between these three men is much more fragile than they had realized. Complex, darkly funny, and thought-provoking, this play by Mando Alvarado was part of the 2019 Two River Theater Crossing Borders Festival.

Although trapped under house arrest, novelist Maria Celia and her sister Sofia can still hear the rumors of shifting global politics growing in 1990s Havana. As they await changes for Cuba, as well as changes to their situation, it’s uncertain whether freedom will come through government regime change, Maria Celia’s far-off husband, or the charismatic military officer who has begun insinuating himself into the sisters’ lives. A passionate tale of revolution, art, and forbidden love written by Pulitzer Prize-winner Nilo Cruz (Anna in the Tropics).

Celebrating ten years of engaging young theater artists with the work of the Bard! Each season, Two River Theater produces a 75-minute adaptation of a Shakespeare play—directed and designed by theater professionals and performed and supported backstage by high school students.

Single tickets can be purchased by visiting tworivertheater.org, calling 732.345.1400 or by visiting our Box Office at 21 Bridge Avenue, Red Bank.

Three- and four-play subscription packages are available now! Subscribers save up to 25% off regularly priced tickets and enjoy additional benefits. Season subscriptions may be purchased now by calling 732.345.1400 or by visiting our Box Office at 21 Bridge Avenue, Red Bank.

Adding a donation to your subscription purchase opens the door to extra benefits as part of our Backstage Pass program. Starting now and through the entire 2022/23 Season, subscribers who donate $120, or $10 per month, enjoy a benefits upgrade to the UNDERSTUDY level which includes:

For more information about Backstage Pass and a complete list of all benefits, please visit: https://tworivertheater.org/support/backstagepass/.

Plays, artists, dates, and ticket prices are subject to change.

﻿The safety of our patrons, staff and artists is our number one priority. As such, all guests, regardless of age or vaccination status, are required to wear masks while inside the theater building. Exceptions are only made for patrons eating and/or drinking in designated areas, one hour prior to the showtime.

Providing proof of vaccination will be determined on a show-by-show basis.

Two River Theater will follow any forthcoming state mandates related to Covid-19. All requirements are subject to change, allowing us to best prioritize the safety of our audience members, artists, staff and community.

Two River Theater produces a theatrical season that includes American and world classics, new plays and musicals, programs for young people, and festivals of new work. Each year, we also offer 40+ events that reflect our diverse community of Red Bank, New Jersey. Two River produces work on two stages—the 350-seat Rechnitz Theater, and the flexible 110-seat Marion Huber Theater. The theater’s recently opened Center for New Work, Education and Design is a three-story facility that includes two rehearsal studios, artist labs, classrooms, expanded shops and centrally located offices. Two River Theater has commissioned and premiered original projects including Be More Chill by Tony Award nominee Joe Iconis and Joe Tracz (the theater’s first Broadway production) and Hurricane Diane by Playwright-in-Residence Madeleine George (which won an Obie Award for its Off-Broadway run). In June 2019, Two River was nationally recognized by USA TODAY as one of “10 great places to see a play” across the U.S. Two River serves thousands of students and community members through arts and humanities programs at the theater, in schools and throughout its region.