“We are honored to have the opportunity to share this collection with the public,” said Maura Reilly, director of the Zimmerli. “It includes work by some of the most important artists of the past six decades—Emma Amos, Dawoud Bey, Chakaia Booker, Mel Edwards, Jaune Quick-to-See Smith, and others—which, when combined with our stellar American art collection, provides a more comprehensive picture of American art and society.”

The Zimmerli in 2018 expanded the scope of its Art of the Americas holdings by accepting the collection from the Jersey City Museum, which closed in 2012. This exhibition is an introduction to more than 80 artists from that collection. One of the most poignant works is Luis Cruz Azaceta’s 1992 print Lotto: The American Dream (top), foreshadowing today’s daily headlines about income inequality and the precarious financial conditions of so many Americans. 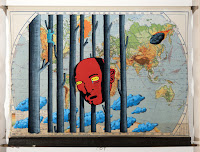 Other extraordinary works in the exhibition include a selection of prints made at the workshop of the Instituto de Cultura Puertorriqueña during the 1960s and 1970s; Big Daddy Draped (1971), a classic feminist and anti-war painting from the Big Daddy series by May Stevens; David Wojnarowicz’s Untitled (red head on world map) (right), a 1982 painting that is a vivid meditation on the individual’s relation and responsibility to a global community; and Juan Sanchez’s 1992 print Para Don Pedro (below, left), which associates the image of Pedro Albizu Campos, the hero of the Puerto Rican independence movement, with traditional religious imagery of martyrdom. 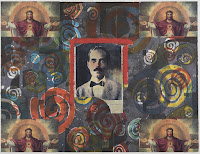 In addition, the exhibition includes a re-creation of Sheila Pepe’s Tunnel (2005), an installation of shoelaces and nautical rope that references the mostly immigrant laborers who dug the tunnels between New Jersey and New York, as well as those who commuted through them to work in the city’s factories.

On Oct. 13, from 5 to 6:30 p.m., the public is invited to a conversation between Sheila Pepe and Zimmerli director Maura Reilly, as they discuss the artist’s work and the exhibition.

American Stories also presents an opportunity for the Zimmerli to collaborate with the Public History Program in the history department at Rutgers–New Brunswick. Undergraduate students researched the artists and composed exhibition labels, which will be in English and Spanish throughout the galleries.

In addition, the Zimmerli features two exhibitions drawn from the historical aspect of the newly acquired collection: Picturing Jersey City: Nineteenth-Century Views by August Will and Beauty Among the Ordinary Things: The Photographs of William Armbruster.

Both Will (1834-1910) and Armbruster (1865-1955) were important in the formative years of the Jersey City Museum. They documented the city as it rapidly developed in the late 19th and early 20th centuries. Will chronicled the changing landscape of his adopted hometown and visually traced its transformation into an urban center, while Armbruster captured the region’s disappearing pastoral landscapes, nostalgically envisioning a pre-industrial life.

Admission is free to the Zimmerli Art Museum at Rutgers. The museum is located at 71 Hamilton Street (at George Street) on the College Avenue Campus of Rutgers University in New Brunswick. The Zimmerli is a short walk from the NJ Transit train station in New Brunswick, midway between New York City and Philadelphia.

For the most current information, including safety protocols, parking, and accessibility, visit zimmerli.rutgers.edu. For Rutgers updates, visit Universitywide COVID-19 Information.

The Zimmerli’s operations, exhibitions, and programs are funded in part by Rutgers, The State University of New Jersey, and income from the Avenir Foundation Endowment and the Andrew W. Mellon Foundation Endowment, among others. Additional support comes from the New Jersey State Council of the Arts, as well as donors, members, and friends of the museum.