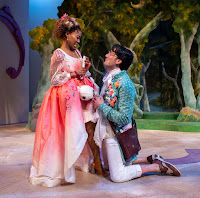 If you love physical comedy, rat-a-tat-tat dialogue delivery and zany French farce as much as I do, you won’t want to miss David Ives’ “translaptation”—a combination of translation and adaptation—of Alexis Piron’s mostly overlooked masterpiece, The Metromaniacs, now onstage at the F.M. Kirby Shakespeare Theatre in Madison. (right: a case of mistaken identity as Damis woos the maid Lisette)

Pirol gives Molière a run for his money in a raucous comedy populated with a pair of lovesick swains; multiple cases of mistaken identity; manipulative, smart servants; a grumpy old man; wannabe poets; and the master setting it all in motion, Francalou, the playwright’s stand-in. Best of all, the play is another favorite genre of mine, the metaplay, a play obviously about the theater! It all adds up to urbane, witty fun. 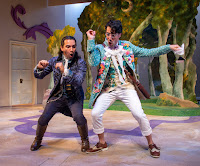 Set in 1738 Paris, where poetry is all the craze (hence, metromania), the wackadoodle plot revolves around the handsome Damis, who has fallen for an obscure female poet, not knowing that his idol is actually a middle-aged man (Francalou) writing under a pen name! Breathless complications ensue as Damis’ friend Dorante pursues his unrequited love for Francalou’s daughter Lucille; Damis’ servant Mondor’s has the “hots” for Francalou’s lucious sassy maid Lisette; and Damis’ uncle Baliveau’s sudden arrival, livid that his nephew has cast aside the law education he’s been paying for in pursuit of poetry! (left: Ty Lane as Dorante and Christian Frost as Damis)

What makes this tomfoolery so palatable to modern audiences is David Ives’ 2015 translation of Pirol’s rhyming couplets, replete with modern cultural references and intricate and often unexpected rhymes (like oy vey and ciao), that poke fun that this 18th century verse-mania. Indeed, The Washington Post called it “a marvel of old and new, with punchlines that glisten with classical flair and contemporary savvy!” 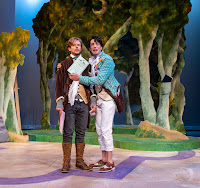 Director Brian Crowe pulls off this madcap production with five talented young actors who keep the verbal pyrotechnics flying fast and furiously while throwing their bodies around at the same time! Christian Frost (right, with Austin Kirk) is a real dynamo as Damis, so head-over-heels for a woman he has never met (and who doesn’t even exist) that he constantly writes and spouts poetry to win her love. His foil and sidekick, the gifted scamp Mondor, is played with hilarious élan by Austin Kirk, who tries valiantly to sort things out but just gets into deeper trouble as he does so.
A superb Billie Wyatt portrays Francalou’s daughter Lucille as a vacuous Valley Girl, spouting “whatever” and “cool” as she awakens to the idea of being in love with not only poetry but with a member of the opposite sex! She exhibits a flair for ludicrous comedy when she asks her maid to teach her how to kiss a man! And Ty Lane, as Damis’ rather dim-witted classmate Dorante, valiantly embarks on his zany pursuit of Lucille, whom he has never even seen, perhaps more interested in her money than her brains!

However, brava to DeShawn White (left, with Billie Wyatt), making her STNJ debut, as Lucille’s sassy, sage maid Lisette. She effectively carries the entire first act on her slender shoulders, manipulating the characters—and the audience—through a nearly terminal bout of mistaken identities and hormone-driven pursuit of love. She comes dangerously close to stealing the show and is a true delight to watch! 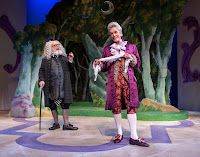 The two senior actors of the troupe, Brent Harris and John Ahlin (right) as Francalou and Baliveau, respectively, are as fine as the youngsters. Harris is charming, yet sneaky, as he attempts to get his daughter married off while madly writing the very poetry Damis has fallen for! He’s especially funny when he lets us in on the secret in the very first scene and then recaps the previous dizzying events at the start of the second act, something we need because our heads are spinning from the plethora of deceptions and the quick delivery of dialogue in Act I! The ever-hilarious John Ahlin has a field day as Damis’ close-minded, rich uncle Baliveau who, enlisted to act in Francalou’s “play,” walks around the stage practicing the bellow he’s to deliver! His metamorphosis from grumpy old man to pussy cat is a marvel to watch!

While the action seemed to stall a bit in the second act from the constant barrage of mistaken identities and nom-de-plumes—there were times I just wished they’d bring it to a close—it’s important to note that the energy level never flagged, and the cast seemed to be having as much fun as the audience!

This screwball comedy unfurls on an elegant set designed by Dick Block; that it’s obviously a stage set is conveyed by the revolving trees behind which characters often hide to observe what’s going on. Brian Russman’s beautiful costumes suggest various aspects of the characters’ personalities; get a load of Damis’ brown-and-white wing-tipped shoes and Lucille’s fuzzy sheep slippers and ewe handbag! Tony Galaska’s atmospheric lighting expresses the passage of time. And Director Brian Crowe is to be commended for eliciting marvelous performances from what is, essentially, a very young cast, while keeping the action moving at a breakneck pace with nary a flubbed line nor missed spot!

So, if you love words, farce, broad slapstick comedy and obvious theatricality (that meta-play!), you’ll want to, as Brian Crowe wrote in his Director’s Notes, “Take a break from your worries and enter the silly world of The Metromaniacs. This fast-paced, witty concoction of a play is like a champagne spritzer; light, effervescent, and perfect for a fun-filled evening out with friends as the summer comes to a close."

Pirol’s original play languished in obscurity for centuries, but David Ives’ witty translaptation and STNJ’s polished production will have you thinking and laughing about it for a long time. It’s kind of like a gift you didn’t know you wanted but are delighted to receive!

The Metromaniacs will be performed on the Main Stage of the F.M. Kirby Shakespeare Theatre, 36 Madison Ave., Madison (on the campus of Drew University), through September 4, 2022. For information and tickets, visit www.ShakespeareNJ.org online or call the box office at 973-408-5600.