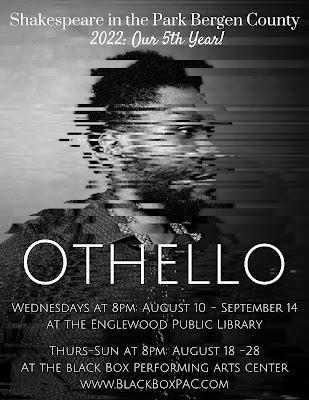 OTHELLO
WHEN & WHERE: Wednesdays from August 10 to September 14 at 8pm. Additional performances will be held on the Main Stage of Black Box PAC on Thursdays through Sundays from August 18 to 28 at 8pm.
ADMISSION: free
Please visit www.BlackBoxPAC.com for more details!
Black Box PAC's Shakespeare in the Park Bergen County returns for its fifth year of free public programming with a modern take on the classic tragedy Othello!

Othello follows one great man's rise to power through integrity and hard work, only to be taken down by the institutional racism and sexism in the cut-throat corporate world. Reset in the high-powered business world of today, the play's varied and enduring themes leave audiences questioning societal attitudes and what it means to be an outsider.
Black Box PAC is the team behind Shakespeare in the Park Bergen County, now in its fifth year! The program is known for its innovative and accessible rethinking of the Bard's classics that remain true to the original texts.

The Black Box Performing Arts Center is a 501c3 nonprofit organization based in Northern New Jersey. The collaborative group of artists pivoted during the pandemic and the company has become NJ's incubator for new and under-produced works by world-class artists. BBPAC began by developing Eric Bogosian's 1+1 in NJ in Fall 2021 no comma needed and it received a Special NYC Premiere in July 2022, headlining The Chain Play Festival. Additionally, BBPAC's '21-'22 season included The Cleopatra Club by legendary filmmaker Paul Schrader, Ode to Joy by Broadway's Craig Lucas, and the recent premiere production of Exposed by Beth Henley, as well as short works by John Guare and Caridad Svich. Other works by filmmaker/playwright Neil Labute and renowned Hollywood sitcom writer Ken Levine are also in development. The 2022-2023 Season will include revived classics in partnership with the Estates of Broadway and Off-Broadway legends as well as modern plays and musicals in collaboration with the creators.
For more info, please visit www.BlackBoxPAC.com, email blackboxpac@gmail.com, or call (201) 569-2070.