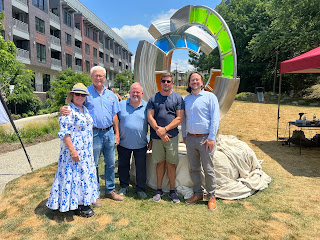 On July 12, 2022, at 1PM, the Town of Morristown unveiled its newest public art piece at Open Space at Speedwell, located at 51 Prospect Street next to the Modera 44 and Modera 55 apartments. Partner organizations Morris Arts, Topology, and CORE Creative Placemaking were among the attendees along with press, community members and others. (Left: From L to R: Principal of CORE Creative Placemaking Kadie Dempsey, Mayor Tim Dougherty, Morris Arts Executive Director Tom Werder, Artist Nathan S. Pierce and Topology Principal Chris Colley in front of newly revealed “Convergent” sculpture.)This sculpture was part of an international selection process issued in June 2018, which chose and commissioned Nathan S. Pierce of Cape Girardeau, Missouri, for the project in early 2019. After some delays due to the pandemic, including material shortages, the sculpture was installed on the morning of July 12 and formally presented to the public shortly after.
Pierce said, “I am thrilled and thankful that my work is going to be a permanent part of your community and help it grow in its new direction.”

“So, “Convergent”—the idea behind the piece is, the circular forms they kind of bring the eye back in on itself in a few different ways and it also becomes a metaphor for how this development has become part of the community that it serves.”

Public art is a distinguishing part of our public history and our evolving culture. It reflects and reveals our society, adds meaning to our cities and uniqueness to our communities.
When speaking about the initiative and public art, Mayor Tim Dougherty said, “…it’s [art’s] all part of our living culture–our thread that keeps everything together. We have been looking forward to this—we’re so excited and we’re so grateful that we’re able to produce and be part of this unveiling and what it means to our community.”

"Convergent” is the second commissioned public art piece out of Morristown’s One Percent for Art program which was started in 2015 and established by Morris Arts, a non-profit that works to promote art and culture in the community. One Percent for Art is an initiative that mandates that any new development in Morristown must provide for one percent of capital costs—up to $100,000—to put toward installation and maintenance of exterior public art on, or adjacent to the property being developed. Morristown is among the first municipalities in New Jersey to institute this initiative.

Morris Arts plans to host a larger community celebration event at the park as part of its upcoming 50th Anniversary. More information, photos and footage can be found at www.morrisarts.org.