Two River's Summer Intensives Program is back this July! 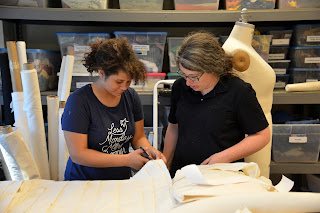 After a two-year hiatus, Two River Theater’s Summer Intensives are back! Students ages 13–18 can stretch their artistic muscles this summer and create a show in just one week. The Onstage Track is perfect for actors, dancers, and singers and the Backstage Track is where technicians and designers can dig deep into the show-building process. Every week has a theme for the performance, and a specific area of focus for the Backstage Track. 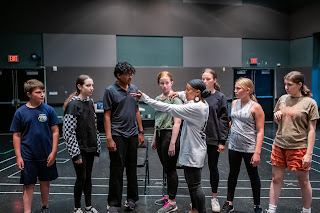 “Two River’s Summer Intensives program is for young theater-makers, students who are interested in more than simply memorizing a script or pulling open a curtain,” says Director of Education Kate Cordaro. “Our students truly help to shape each week’s performance with their insights into the weekly themes and the interests, talents, and willingness to learn that they bring to the table. The list of skills gained each week in both the Onstage and Backstage Tracks is astonishing. We can’t wait to get started!” (Above: Opening Act 2021. Photo by Brad Resnick)

*Each week runs Monday to Friday from 9AM to 4PM, with a performance each Friday at 7PM. Participants can take one, two, or all three weeks, and switching between multiple tracks while taking multiple weeks is encouraged.

Two River Theater's education programs are supported in part by Investors Foundation, Manasquan Bank Charitable Foundation, The Mary Owen Borden Foundation, OceanFirst, PNC Foundation, The Stone Foundation of New Jersey, and Zynergy Retirement Planning, and are made possible in part by the New Jersey State Council on the Arts/Department of State, a Partner Agency of the National Endowment for the Arts.﻿

Two River Theater produces a theatrical season that includes American and world classics, new plays and musicals, programs for young people, and festivals of new work. Each year, we also offer 40+ events that reflect our diverse community of Red Bank, New Jersey. Two River produces work on two stages—the 350-seat Rechnitz Theater, and the flexible 110-seat Marion Huber Theater. The theater’s recently opened Center for New Work, Education and Design is a three-story facility that includes two rehearsal studios, artist labs, classrooms, expanded shops and centrally located offices. Two River Theater has commissioned and premiered original projects including Be More Chill by Tony Award nominee Joe Iconis and Joe Tracz (the theater’s first Broadway production) and Hurricane Diane by Playwright-in-Residence Madeleine George (which won an Obie Award for its Off-Broadway run). In June 2019, Two River was nationally recognized by USA TODAY as one of “10 great places to see a play” across the U.S. Two River serves thousands of students and community members through arts and humanities programs at the theater, in schools and throughout its region. Two River Theater is led by Artistic Director John Dias and Managing Director Michael Hurst.
Posted by Ruth Ross