The Black Box Performing Arts Center, a 501c3 nonprofit organization, is pleased to announce a special fundraiser evening, featuring a staged reading of the new play 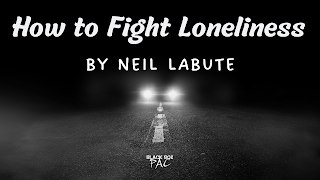 How to Fight Loneliness
by Neil LaBute

In this riveting and provocative drama, a young woman's health crisis forces her and her husband to confront mortality and morality. Emotions rise when a mysterious man from her past enters the scene, and the trio must face difficult decisions and the consequences that follow.

Neil Labute is an award-winning playwright, filmmaker, and screenwriter. His plays include:bash, The Shape of Things, The Distance from Here, The Mercy Seat, Fat Pig (Olivier-award nominee for Best Comedy), Some Girl(s), Reasons to be Pretty (Tony Award nominee for Best Play), In a Forest, Dark, and Deep, a new adaptation of Miss Julie, and Reasons to be Happy. He is also the author of Seconds of Pleasure, a collection of short fiction, and a 2013 recipient of the Literature Award from the American Academy of Arts and Letters. Neil Labute’s film and television work includes In the Company of Men (New York Critics’ Circle Award for Best First Feature and the Filmmaker Trophy at the Sundance Film Festival), Your Friends and Neighbors, Nurse Betty, Possession, The Shape of Things, Lakeview Terrace, Death at a Funeral, Some Velvet Morning, Ten x Ten, Dirty Weekend, Full Circle, Billy & Billie, and Van Helsing.