Amid all this hullaballoo about banning books that might corrupt young minds, let us not forget that theater is the most subversive of the arts. The ancient Greeks, who invented the genre, used drama—especially comedy—to criticize the status quo and lay bare society’s failing in plays that resonate even today.

Drama’s “danger” lies not only in the words penned by the playwright but in the performances that give life to those words, communicating disconcerting ideas to the audience, who then takes them home, chews them over and often shares them with their peers.

Given Luna Stage’s predilection for edgy theater, it is no surprise that their first return to live performance, Bernardo Cubría’s dramedy The Giant Void in My Soul, will give you much to consider and shake up your mindset about what really matters in life. You may exit the theater scratching your head about what you’ve just experienced, but I guarantee that you’ll be thinking about it for hours after you’ve returned home. (Above, back row: Joseph A. Keller, Darin F. Earl II, Valerie Terranova; front: Jesse Castellanos)

Drawing on the legacy of Theater of the Absurd (think: Waiting for Godot) and the tale of an idealistic quest (think: Don Quixote and even a little Candide for good measure), Cubría has best friends Fools 1 and 2—aided by two equally nameless “performers”—embark on a journey to fill the giant void one has glimpsed in his soul. In a wild, confusing, poignant and hilarious adventure, they try food, alcohol, drugs, religion, employment, marriage, parenthood and self-reflection in an existential hunt for joy and meaning.

To tell the tale, Director Rajesh Bose has assembled a quartet of brilliant actors, two of whom communicate mostly by mime (or limited speech). Jessie Castellanos (Performer 1) and John P. Keller (Performer 2) twist their bodies into pretzels, use their very expressive faces (especially Castellanos) to communicate a wide range of emotions immediately recognizable by the audience: delight, puzzlement, anger and emotional discomfort. Sometimes they play characters; other times, they portray clowns who move props around the playing space.

As the speaking characters, Darin F. Earl II (Fool 1) and Valerie Terranova (Fool 2) recite absurdities as though they make perfect sense as they take us through the various stages of their friendship. The fondness these characters have for one another is palpable, their chemistry on full display. By the end of 90 minutes, we feel as though we know them well—and wish them the best as they deal with the randomness of life. Earl’s desire to fill the void he feels arouses our sympathy; Terranova’s steadfast friendship and optimism are priceless antidotes to his feelings of hopelessness. 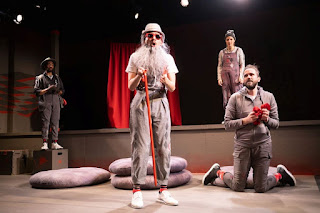 The mostly gray costumes convey the bleakness of the world these characters inhabit; the touches of red that stand out against the monotonous background signify hope. Dr. Joseph A. Putrino, Jr.’s minimalist set design allows us to focus on the characters and their words; Deborah Caney’s costumes evoke commedia del’arte for the Performers and the Everyman quality of the Fools. Cameron Filepas’ lighting design is atmospheric and appropriate to the stages of their journey; Steve Brown’s sound design enhances the other worldliness of the production.

The figure of Picasso’s Don Quixote and Sancho Panza on the back wall of the stage reminds us that life is a journey. Tilting at windmills may appear silly, but the quest to understand and deal with life—and to take ownership of our own lives—is of great consequence. After all, how would Don Quixote really value what he already had if he hadn’t gone out into the world to try to conquer (and find) it?

Cubría wrote the play before the recent pandemic, but the effects of COVID on our lives resonate throughout The Giant Void in My Soul. What will make us happy? What will make us feel valued, worthy? These are essential questions we ask ourselves as we make the most of our time on this mortal coil. There are no easy answers, and that’s precisely the point! The journey, not the destination, fills the void in our souls and provides us with joy—or something…

The Giant Void in My Soul will be performed at Luna Stage, 555 Valley Road, West Orange, through May 11. Tickets are “pay-what-you-wish,” but reservations are needed. Go to www.lunastage.org/void for more information and tickets.