“It’s spring fever onstage! Ride the Cyclone is a show that will lift your spirits and remind you of what is worth celebrating in your life.” —Artistic Director Sarah Rasmussen 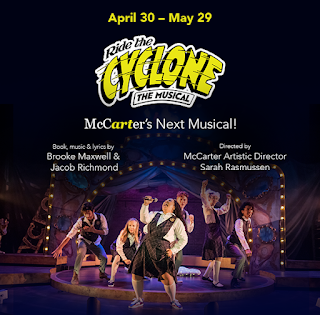 Ride the Cyclone: The Musical

McCarter rings in Spring with Ride the Cyclone: The Musical—a wholly unexpected, wildly imaginative story that delivers surprises at every turn. The first show to be directed by McCarter’s new Artistic Director Sarah Rasmussen. The New York Times described the show as “…high-spirited and just plain fun…like an all-access pass to Disneyland.”

Ride The Cyclone: The Musical follows six teenagers from a Canadian chamber choir who take one last ride on a rollercoaster that changes the course of their lives forever. At once quirky and smart, edgy and beautiful, Ride the Cyclone reveals the resilience of the human spirit.

“I am beyond excited to direct my first show at McCarter—especially with this dream team of designers and cast...and McCarter's incredible production team.  It's going to be like throwing a big party in Princeton every night—and you are all invited!” —Sarah Rasmussen