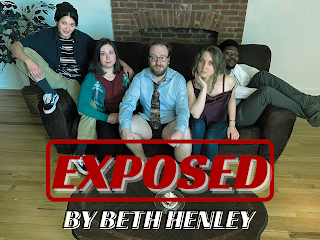 WHEN: through Saturday, May 28
WHERE: The Black Box Performing Arts Center - 49 East Palisade Avenue in Englewood
TICKETS: on sale now at www.blackboxpac.com.

Exposed was presented as a workshop by New York Stage and Film Company and The Powerhouse Theater at Vassar in July 2003. This fast-moving, poignant comedy follows five interconnected individuals on the Winter Solstice as they try to escape the pervasive loneliness of late 1990's Los Angeles.

Beth Henley is an award-winning playwright, screenwriter, and professor. Her plays include Crimes of the Heart (Pulitzer Prize in Drama and the New York Drama Critics Circle Award for Best American Play), The Wake of Jamey Foster, The Miss Firecracker Contest, Am I Blue, The Lucky Spot, The Debutante Ball, Abundance, Control Freaks, Impossible Marriage, Family Week, Ridiculous Fraud, The Jacksonian, Laugh, and The Unbuttoning. Her plays have been produced on Broadway and across the country as well as internationally and translated into twelve languages. Originally from Mississippi, Ms. Henley now lives in Los Angeles and serves as the Presidential Professor at LMU/LA.

Black Box Performing Arts Center (BBPAC), a 501c3 nonprofit organization founded in Teaneck 2015 and relocated to 49 East Palisade Avenue in Englewood in 2019, and Black Box Studios (BBS), which has operated in Bergen County since 2007, together form Northern NJ’s premiere theater and performing arts school combo. BBPAC is a working professional theater run by The Black Box Rep Company, a group of collaborative artists engaging in collaborative, cutting-edge theater. The tight-knit community self-generates full seasons of cutting-edge theater, reviving classics both old and newer, while also developing original works for the intimate stage. Many of these professionals double as teaching artists for Black Box Studios, running classes and workshops at the theater and at various schools and organizations in the area, for students currently ranging in age from 9 to 81. Our team is also focused on presenting other art forms within the space, such as comedy and music, as we host the emergence of a new and unique artistic community.