Jersey City Theater Center (JCTC), together with Ukrainian JC and Ukrainian and Jersey City artists, announce a screening of the feature-length film Julia Blue, with all proceeds for the direct benefit of the people of Ukraine. Julia Blue (running time: 90 minutes) is written and directed by Roxy Toporowych, a first-generation Ukrainian American. Toporowych will introduce her film and lead a discussion and Q&A following the screening. (Photo above by Sashko Roshchyn)

The inspiration for Julia Blue came from Toporwych’s time spent in Kyiv, Ukraine, in 2014, a few short months after Russia’s annexation of Crimea and the downing of MH-17. “I found myself thinking about the basis of one’s identity. What makes us feel that we are part of a certain ethnic or cultural group? Is it what we are taught? Where we are born? What language we speak? How do we preserve a sense of self when our identity is attached to a country whose status is in constant flux?” shares Toporowych. “I wanted to explore this notion of identity. At the same time, it became important for me to find a way to spotlight what I was experiencing. This wasn’t a war happening in a far-off land. I didn’t just read about it online. This was happening around me in real time,” she adds.

“Through Julia Blue, Roxy authentically captures the realities of wartime. Her film perfectly encapsulates the experiences of the many young people growing up and claiming their identity in a country at war. By presenting Julia Blue, JCTC hopes to foster a greater shared understanding of the war’s impact on the Ukrainian people and their rich heritage,” says Olga Levina, JCTC’s Executive Producer.

Inspired to study photography by the protest scenes she witnessed in Kyiv during the 2014 revolution, Julia (Polina Snisarenko) has now set her sights on a future outside her beloved Ukraine. A year after the revolution, Julia volunteers at the military hospital for injured soldiers returning from the front in Eastern Ukraine. Julia brings a carefree happiness to their ward. One day she meets English (Dima Yaroshenko), a soldier who has arrived at the hospital with easily mended surface wounds and deeply set emotional scarring. A gentle relationship emerges that draws the two of them closer, but each has withheld something vital from the other. When Julia decides to bring English home for a family wedding, the cost of their secrets threatens more than their relationship. A beautiful allegory for the freedoms of our modern world that seem all too fleeting, Julia Blue reminds us not just of the costs of love and war, but of the sometimes painful choices freedom demands. Featuring breathtaking cinematography from metropolitan Kyiv to the sweeping landscapes of the Carpathian Mountains, the heart and soul of Ukraine is on display with Julia Blue. 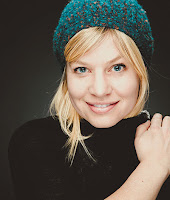 Roxy Toporowych is a first-generation Ukrainian-American filmmaker based in New York City. Heavily influenced by her upbringing, her work focuses on stories about independent women and the Eastern European culture she just can't shake. Toporowych's narrative directing debut, Julia Blue, was inspired by her time as a Fulbright Scholar living in war-torn Ukraine. She is an IFP Narrative Lab Directing Fellow 2016 and the recipient of the IFP Gotham Calvin Klein 'Live the Dream' grant for emerging female directors 2016. Julia Blue was a part of Rooftop Films Works in Progress Screenings 2018 and Seattle WIP Labs 2017. The film has won numerous awards, including Best Film at the Anchorage International Film Festival 2018, Julien Dubuque International Film Festival 2019, and Cambria Film Festival 2020 and Best Foreign Film at the Female Eye Festival, 2019. In 2020, the film was distributed by MeGogo and is available on Amazon in the US and UK. Roxy is a graduate of NYU’s Tisch School of the Arts and has worked in film and TV set decoration for over 15 years. Credits include Captain America: Winter Soldier, The Other Guys, Saturday Night Live and Steven Spielberg’s West Side Story.

Since 2006, JCTC has provided a platform for all artistic voices to be heard. When we share stories through the arts, we spark meaningful dialogue that leads to greater understanding and respect. And, as a result, we build better communities together.
Posted by Ruth Ross