The Last Weekend of "A Portrait of Ray" Honors Montclair Brewery, Toni’s Kitchen, and Jack & Jill 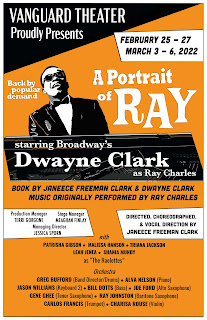 A PORTRAIT OF RAY

A Portrait of Ray, a musical tribute to Ray Charles, takes audiences on an exhilarating journey back to 1967 at the height of Ray Charles' career, and is set during a homecoming concert in Greenville, Florida.
Tickets are currently on sale for the production, running for four more performances before star Dwayne Clark heads back to Broadway to open Paradise Square.

Reviews of the first weekend of shows are stellar!

"The show was fabulous! It was so professional. I loved the smoky night club setting. The food was delicious, and the show was so thoroughly entertaining."
"Go see A Portrait of Ray at Vanguard Theater Company. Congratulations Dwayne Clark and Janeece Freeman Clark on this love letter to the incomparable Ray Charles."

"It was an honor to witness such work where everyone was so talented and poured out their hearts. Don’t miss this remarkable performance filled with historical and biographical details."

Check out this video! https://youtu.be/-jn4cl2nrpE 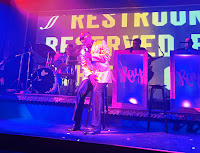 , who portrays Ray Charles, is a Broadway veteran (In the Heights, Rent, Spiderman—Turn Off the Dark, The Color Purple, Tarzan, Smokey Joe’s Café, Urinetown and more) is about to enter previews for the highly anticipated Paradise Square, which begins previews on March 15 at the Barrymore Theater.
Asked what drew him to Ray Charles, Clark says: "There's something about the spirit of Ray that I connect to for some reason. My dad used to play his records when I was a boy growing up and I really didn't know what I was listening to back then, honestly. Something about his journey, it's like when I put on the glasses something just happens to me." 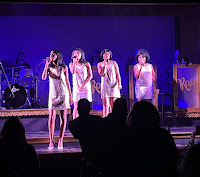 The show will be presented in a cabaret setting, with tables of 4 and 2, to allow people to sit with their “pods” (there will also be single seats available). Doors will open one hour before curtain to allow patrons to purchase pre-show cocktails and delicious Southern cuisine by June Williams.
Posted by Ruth Ross