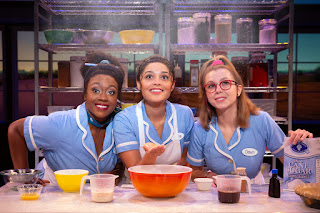 WHEN:  Thursday, April 14, 2022, at 8pm; Friday, April 15, at 8pm; and Saturday, April 16, at 2pm and 8pm.
WHERE: State Theatre, 15 Livingston Ave., New Brunswick
TICKETS: $40-$98.
For tickets, more information, or group discounts, call State Theatre Guest Services at 732-246-SHOW (7469) or visit online at STNJ.org. State Theatre Guest Services, located at 15 Livingston Ave, New Brunswick NJ, is open by phone and email only, Tuesday through Friday from 11am to 5pm. For in-person purchases, Guest Services is open Tuesday through Friday from 12pm to 4:30pm. Additional ticket and transaction fees may apply.

Meet Jenna, a waitress and expert pie-maker who dreams of a way out of her small town and rocky marriage. Pouring her heart into her pies, she crafts desserts that mirror her topsy-turvy life such as “The Key (Lime) to Happiness Pie” and “Betrayed by My Eggs Pie.” When a baking contest in a nearby county—and a satisfying encounter with someone new—show Jenna a chance at a fresh start, she must find the courage to seize it. Change is on the menu, as long as Jenna can write her own perfectly personal recipe for happiness.