During the heights of COVID-19 in 2020 and then closer to the summer of 2021, these unshakable students gave the performances of a lifetime with their outdoor, completely socially distanced production of Blue Stockings by Jessica Swale in the parking lot of Ma'ayanot and then an inside-BBPAC presentation of The Ballad of The Sad Cafe by Edward Albee adapted from the novella by Carson McCullers. Previous Ma'ayanot Drama Society/Black Box productions include A Few Good Men, Street Scene, The Grapes of Wrath, My Aunt's Son Vinny, One Flew Over the Cuckoo's Nest, Detective Story, and Odet's masterwork Paradise Lost.

Golden Boy is the dramatic, comedic, and poignant story of a young violinist in early-1930's NYC who abruptly gives up a promising musical career for a fleeting chance at boxing stardom with the help of a scheming manager, an unlikely lady-friend, and a bizarre and powerful gangster -- against the wishes of the immigrant father who has placed all hope for the family's future in America in his beloved youngest son.

The Drama Society's Student Directors are Naomi Honikman and Tamar Bruk. The Production Stage Manager is Risa Farber, with costumes by Kayla-Rachel Singer, set/props by Leora Tiger, sound by Naava Bodek, and lighting by Naama Davidovics. 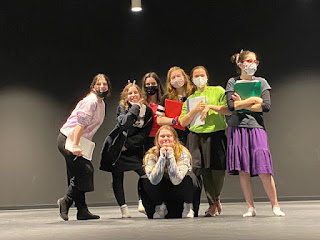 Due to mature themes, GOLDEN BOY is not recommended for young children.
Posted by Ruth Ross