Windows into Black History
WHEN: on exhibit during February 2022 in honor of Black History Month
WHERE: Studio Montclair Gallery, 127 Bloomfield Avenue, Montclair, NJ.
The exhibit, featuring the artwork of four artists, spans four large windows which can be viewed from the street and is sponsored by the Montclair Center BID as part of Fresh Air Montclair Exhibitions. 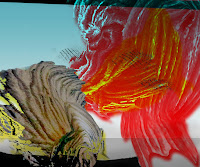 Window 1 displays works from Kay Reese’s new series, Crossing. The series consists of photo-based images that are digitally reconstructed and collaged, creating entirely new images which are then printed on canvas. The Crossing series visualizes the African Holocaust, using abstraction as the narrative structure of this global historical and social phenomenon. It uses Black people's naturally textured hair as a central, unifying visual element. The Crossing narrative consists of' "scenes" or active landscapes which convey the experience of Black people struggling for freedom as they cross the world in ships as captives in pre-and post-colonial eras, crossing borders, languages, cultures, gods, and identities. (Above: I saw three souls escaping)

Window 2 is comprised of work by artists Chuck Miley and Onnie Strother. Chuck Miley’s work is from two of his series, Why Reparations and Black Lives Matter Martyrs. Why Reparations consists of four woodblock prints depicting the slave labor undergirding the economic wealth and development of the United States. The big four—cotton, sugar, rice, and tobacco—were instrumental in the economic growth and individual wealth of the US from its earliest days as a colony to the Civil War and beyond. Black Lives Matter Martyrs: Say Their Names addresses the history of endemic violence—including that which took place during the Covid pandemic—against unarmed men and women of color. According to artist Chuck Miley, “Slavery, the original sin of our country, has left a poison in our society. As an artist, my art is my voice. I must use my art to draw attention to hate and injustice. Picasso said, ‘Painting (art) is a weapon.’ Therefore I, ‘say their names…’ in my Martyr series of woodblock prints. I honor those men and women’s lives and their memory.”  (Left: Martyrs, Elijah McCain) 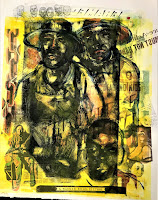 Onnie Strother will feature work from The Scottsboro Series: An arts meditation on the treatment of African American youth in the legal system, and Big Boy Emmitt Till. The Scottsboro Series (right) homes in on the experience of the nine African American teenagers accused in Alabama of raping two white women in 1931. It resulted in a landmark set of legal cases, constituency, and organizations. The story of the Scottsboro Boys brought together politics, racism, sex, fear, art and drama. There were lynch mobs before the suspects had been indicted, all-white juries, rushed trials, intimidation, twists, turns and the rise of the Communist Party as a force for justice. The experience of the Scottsboro boys is a prime example of how Black youths were treated in the Jim Crow Legal System. Their struggle for justice marked the beginning of the Civil Rights Movement in the twentieth century. Big Boy Emmitt Till addresses the brutal murder of a 14-year-old African American boy that shocked the nation and also served as a catalyst for the modern civil rights movement.

Oscar Peterson’s We Too, flag series in Window 4 probes the fact that some people (including a former president) say that Black people don’t love our country and have no respect for the flag. The flag that waves for Black people is the same flag that waves for (and sometimes smothers) all of the oppressed peoples of America. According to Peterson, “We too, have fought and died for this country—our country, this flag, our flag—without getting the rights and benefits others have received. We too, respect the flag and ALL it stands for. We just want the country to live up to its promises.”