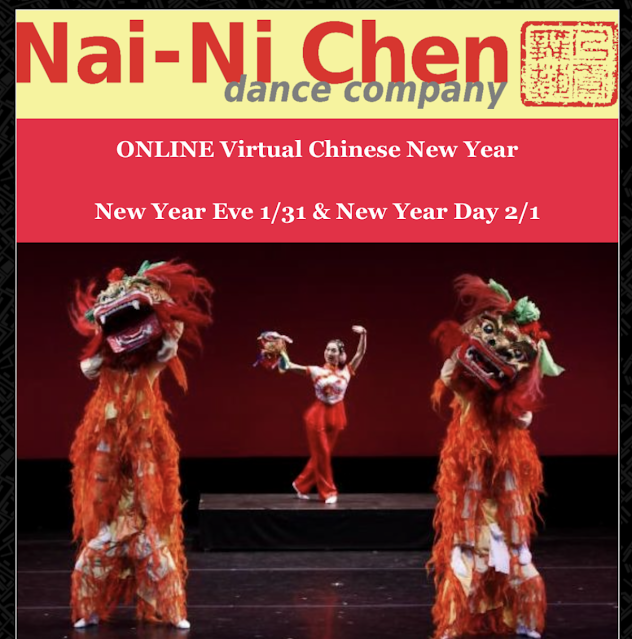 Nai-Ni Chen Dance Company announces
A Virtual Celebration of the Chinese Lunar New Year of the Black Water Tiger
WHEN: New Year’s Eve, Monday, January 31, 2022, at 10AM ET and New Year’s Day, Tuesday, February 1, 2022, at 10PM ET.
WHERE: Streaming
REGISTER: RSVP for the free virtual event to receive the watch link.
At this festive gathering, immerse your family in the sound of firecrackers, cymbals, and drums that accompany acrobatic lion dancers. A one-hour, pre-recorded performance will be available online for audience to view. Be mesmerized by the vibrant colors and motion of the endless floating lines of fabric, costumes, and props created by agile dancers and warriors. Enjoy the dazzling display of the dancing dragon.

In celebration of the Year of the Black Water Tiger, Nai-Ni Chen Dance Company hopes that this event can help audiences become more aware of the unique qualities of the Asian American perspective that is shaped by both cultures and recognize the Asian American contribution for the diversity of ideas in our society.

As one of the most popular dances performed during the Chinese New Year celebration, the Lion Dance is said to have originated in the Tang Dynasty 3,000 years ago. The emperor would hold a festival in which people dressed in a hundred kinds of animal costumes, among them the lion. Always performed at the beginning of the year, the Lion Dance is considered a prayer of peace. Throughout the dance a child playfully leads a beast, symbolizing harmony on earth. In this dance, acrobatic skills, coordination, and concentration are critical. There are many styles of the Lion Dance in China; this is the Northern style.

There are more than 55 ethnic groups living in China, and each group has unique dances and music. The peacock is considered a sacred bird among the Dai people in the Yunnan province. Because of the performers’ supreme grace and elegance as peacocks, this dance is one of the most beautiful from that province. Many of the movements in this piece derive from real actions of the peacock, such as drinking water, walking, running, and grooming its feathers.

The solo musical instrument- hulusi was originally used primarily in the Yunnan province by the Dai and other non-Han ethnic groups but is now played throughout all of China. Like the related free reed pipe called bawu, the hulusi has a very pure, clarinet-like sound.

Bamboo Rap is an ancient form of spoken word art practiced in Northern China. The performer speaks rhythmically and accompanies his words with a pair of bamboo claps held in both hands. They tell historic stories of hero, villain and significant events that make up the colorful history of China. Sometimes, they will include poems, tongue twisters and other spoken word techniques.

Yunan province in Southwestern China is known for its richness in dance and music because of the 25 minority groups in this one province. This dance originates from the Bai group in Yunan. The culture of Bai is influenced by the Han Group (the majority group in China) a great deal. It was said that The Coin Stick Dance of the Bai group actually came from the Han group in Central China. This dance is usually performed in pairs of dancers, and the stick is made from bamboo. The coins that fill the holes on the stick make interesting sounds when the dancers shake and hit the stick on their body and the floor as they dance with it in celebration.

Chinese performing arts have a long history. Variety show is known to existed as early as the Qin dynasty (221-207 BC) or possibly earlier. During the Qin and Han periods, Juedi (角抵) or Baixi (百戲) variety show was popular with the common people. The difficult balancing act shown here is incredibly difficult and require persistence and dedication to perform.

Taiwan is well-known for its tea culture and the beauty of the tea plantations. Tea gardens in the high mountain grow the best tea in this region. Girls working in the tea plantation catch the moment of spring rain to pick up their umbrellas and playing cheerfully in the rain.

The ruan (Chinese: 阮; pinyin: ruǎn) is a traditional Chinese plucked string instrument. It is a lute with a fretted neck, a circular body, and four strings. Its four strings were formerly made of silk but since the 20th century they have been made of steel (flatwound for the lower strings). The modern ruan has 24 frets with 12 semitones on each string, which has greatly expanded its range from a previous 13 frets. The frets are commonly made of ivory or in recent times of metal mounted on wood. The metal frets produce a brighter tone as compared to the ivory frets. It is sometimes called ruanqin, particularly in Taiwan.

Xu Xian, a young man who rescued a small snake when he was a small child, met a beautiful woman one day and they were married happily. He did not know that the woman was the magical Lady White Serpent who decided to return to earthly life to help her savior from the past. Monk Fahai, angry at the magical being's enjoyment with mortals, warned Xu Xian that his wife is actually a snake monster who transformed herself into a beautiful woman with ill intentions. During the Dragon Boat festival, Xu Xian listened to the words of Fahai, persuaded his pregnant wife,Bai, to drink realgar liquor which broke down Bai's magic and she appeared in her original form as a white serpent. Seeing her, Xu Xian became frightened to death. Realizing that the only way to bring him back to life would be the magical herb from the Kunlun Mountain at the South Pole, Bai set forth on a quest.

Approaching the Herb, she was met with the guardians of the herb and a great magical battle began. Being pregnant, Bai was unable to defeat the guardians and faced death herself. The God of the South Pole took sympathy upon Bai's love and gave her the Herb to save Xu Xian.

Jing Hu, a special fiddle that serves as the leading instrument for Beijing Opera band, does not only deliver a unique and authoritative sound, but also carries the emotion of an opera show. Mr. Yichuan Yan, born in Shanghai, China, is widely regarded as one the best Jing Hu players of his generation.

Choreographer/Dancer Nai-Ni Chen was a unique artist whose work crosses cultural boundaries. Each of her dances reflects her personal vision as an immigrant and an American female artist with deep roots in the Asian culture. From this very personal perspective, she created new works that reflect current issues with global influences. Many of her works have been developed in collaboration with renowned artists such as the Ahn Trio, Glen Velez, Joan La Barbara, Myung Hee Cho, Karen Young, and Bei Dao, among others.

Bridging the grace of Asian elegance and American dynamism, the Nai-Ni Chen Dance Company is a premier provider of innovative cultural experiences that reflect the inspiring hope and energy of the immigrant's journey. The company's ground-breaking works have focused on themes from ancient legends that reflect issues of the present time to purely abstract, contemporary dances influenced by the mix of cultures Nai-Ni Chen experiences in New York. An Asian American company that celebrates cross-cultural experience, the Company's productions naturally bring forth issues of identity, authenticity, and equality.