REVIEW: LUMINOUS "A CHILD'S CHRISTMAS IN WALES" LIGHTS UP STNJ'S STAGE AFTER 2 YEARS OF THEATRICAL DARKNESS

If you’ve already had your fill of sappy Hallmark Christmas movies on television, get on over to the campus of Drew University in Madison where, after almost two years of darkness, the Shakespeare Theatre of New Jersey lights up its Main Stage once again in time for the holiday season.

Heck, even if you’ve never watched a Christmas movie but you love magnificent poetic language recited by talented actors, buy a ticket for their current production: a dramatization of Dylan Thomas’s prose poem, A Child’s Christmas in Wales!

This classic tale about Thomas’s childhood holidays was staged by STNJ in 1998, 1999, and 2003 and 2016. Combining the social with the cultural, this indoor, in-person performance rejoices in the simple joys of childhood, extols the spirit of goodness, and conveys the sense of magic that music and the imagination bring us this time of year.

Given the anxiety of the past two years of quarantine and vaccines, it is a true gift to share this day with the extended Thomas family in their “semi-detached” home at 5 Cwmdonkin Drive in Swansea. 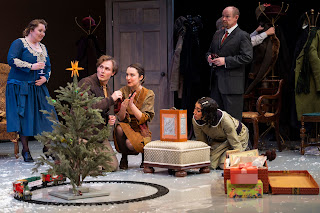 Conceived as a memory play, this adaptation by Jeremy Brooks and Adrian Mitchell captures the magic and wonder of a Christmas long past, as seen through the eyes of a young boy. The lilting poetry, classic Christmas carols and traditional Welsh folk tunes weave a whimsical and heart-warming holiday tale. Capturing the audience’s imagination early on, Thomas reminisces: “I can’t remember if it snowed six days and six nights the Christmas I was twelve or twelve days and twelve nights the Christmas I was six,” and the play is off and running! (Left: Amy Hutchins, Isaac Hickox-Young, Fiona Robberson, Billie Wyatt and Michael Stewart Allen)

Previous productions may have had lavish sets, but Director Bonnie J. Monte’s decision to rely on props and the audience’s imagination lends a magical feel to the production. Thomas’s poetic language and superb acting conjure whole venues out of what seems to be thin air thus involving the audience in the production’s creation. 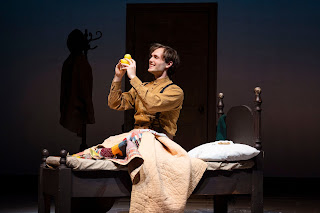 Isaac Hickox-Young (right) is wonderful as Dylan Thomas, moving smoothly between his character as a young boy, full of high spirits, to the adult looking back with nostalgia of what was but one of many Christmases spent with his large and loving family. Along with his sidekicks Jim (Jack Steiner), Jack (Cameron Nalley) and Tom (Dino Curia), he wages war on the neighborhood cats, annoys Smoky the park keeper (an officious Jeffrey Marc Alkins), engages in a battle with the Town Hill Boys (a hungry one played by Joelle Zazz) and bedevils his female cousins. Courtney McGowan’s Brenda is a whiny blonde, while a very animated Billie Wyatt gets great laughs as the feisty Glenda, determined to prove she’s as tough as the boys. 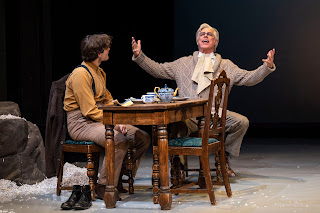 Dylan’s family is portrayed by equally talented actors. As Dylan’s parents, Tina Stafford (returning to the production for the third time) and Broadway veteran actor Jeff McCarthy (Left with Hickox-Young) convey just the right amount of authority and indulgence for their only child. Stafford plays the accordion to accompany “Poor Little Dickie Bird” with gusto. McCarthy is superb fine as D.J. Thomas, recounting his boyhood Christmas memories to Dylan and then topping that with a stirring ghost story and leading a group sing-along with a mellifluous voice!

Dylan’s relatives are quite a mixed bunch. Tippling Auntie Hannah (Kristen Kittel) adds rum to her tea; good natured Aunt Bessie (Amy Hutchins) gifts Dylan with an ugly knitted balaclava (shades of the knitted nose warmers in Jean Shepard’s iconic A Christmas Story!). Outstanding as ethereal Aunt Elieri, Fiona Robberson’s rendition of the traditional Welsh folk song “Shining Heart” is sweet and soulful, and when she retells the story of the ancient Welsh seer-bard Taliesin, the audience holds its collective breath until she finishes.

Michael Stewart Allen’s dour Uncle Tudyr is a walking complaint; James Early’s jolly Uncle Gwyn has a twinkle in his eye for the ladies; and Andy Paterson exhibits good humor and outrageousness as the Postman and socialist Uncle Glyn. 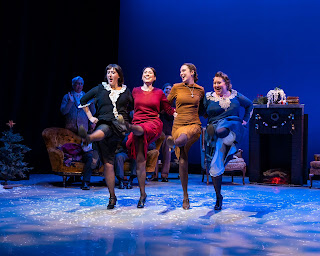 The music is integral to the action onstage and really connects to Thomas’s highly original poetic language. Using familiar carols with new lyrics suited to the events on stage, along with traditional folk music and a few new songs, Brooks and Mitchell remind us that the Welsh are a people enamored of music (they hold national singing competitions each year!) and the Welsh language is lilting and musical. Steven Beckel’s sound design, Paul Canada’s costumes and Matthew Weisgable’s lighting convey the feeling what we are witnessing are the memories of an imaginative and sensitive lad. Julie Foh is to be commended for coaching the actors in what sounds like authentic Welsh accents. (Right: Clemmie Evans, Amy Hutchens, Fiona Robberson, Kristin Kittel perform the Can-Can after dinner.)

After two years of theatrical darkness, it’s so good to welcome A Child’s Christmas in Wales to the F.M. Kirby Shakespeare Theatre stage. The events portrayed there feel fresh yet universal—after all, we were all children once! It helps that Thomas’s language thrills the ears and conjures whole worlds in our imaginations. This production is the perfect gift for the entire family! 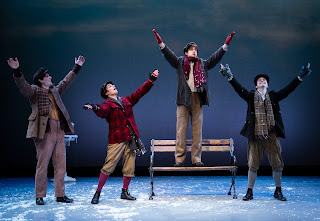 A Child’s Christmas in Wales will be performed at the F. M. Kirby Shakespeare Theatre, 36 Madison Avenue, Madison (on the campus of Drew University) through January 2, 2022. There are no performances on December 24 and 25. Some performances have limited capacity. A full performance calendar will be found on STNJ’s website: www.ShakespeareNJ.org.

The F. M. Kirby Shakespeare Theatre is fully accessible with ramp access and an elevator to all floors. Wheelchair seating is available in both the orchestra and balcony sections. An infrared hearing device is available at all performances. For more information or to order tickets, call the box office at (973) 408-5600 or go to the troupe’s website www.ShakespeareNJ.org.