Pushcart Players has added performances for A SEASON OF MIRACLES virtual 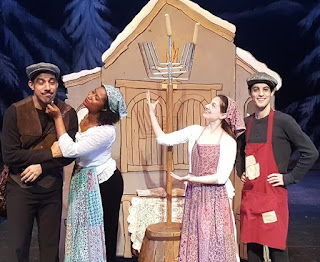 Pushcart Players, New Jersey’s Emmy nominated and award-winning touring theater for young audiences has added a week of virtual performances of
Holiday Tales—A Season of Miracles
WHEN: from December 26th through 31st (Sunday through Friday) at 1:00 pm
WHERE: On-line. Patrons will receive a protected link and password to access the show at performance time.
ADMISSION: Reservations for a Family Pass are $25 and can be ordered by visiting https://pushcartplayers.org/season-of-miracles/ or by calling Pushcart at 973-857-1115.
For further information on this or any Pushcart Players program, visit the website www.pushcartplayers.org or email information@pushcartplayers.org.
This magical musical warms the hearts of family audiences with the true spirit of the year-end holidays of Christmas, Chanukah, and Kwanzaa, and families can view the production from the comfort of their homes.
“The added performances will offer an opportunity for young learners on their winter break to enjoy the production,” said Paul Whelihan, producing artistic director. “A favorite in our repertoire, ‘Miracles’ is traditionally booked solid this time of year with live performances in schools and theaters throughout the region. That not being an option this season, we’re grateful to be able to still bring something magical to our families in this new platform.”

“…A Season of Miracles” visits O. Henry’s ‘The Gift of the Magi’; an original scene set in Africa entitled ‘The Kwanzaa Kite’; a story based on the wise men of Chelm folklore called ‘The Chanukah Miracle’; and E.T.A. Hoffmann’s ‘The Nutcracker.’ Every tale reflects the spirit of the holidays and the people that celebrate them. Music and orchestrations are by Tony Award-winning composer, Larry Hochman, book and lyrics are by Pushcart co-founder, Ruth Fost, and direction is by Whelihan.

Ruth Fost is a playwright, designer, actor, and arts advocate, with a particular focus on arts in education. Fost has appeared in more than fifty leading roles in major productions ranging from Simon (Neil) to Shakespeare to Shaw. She has written 30 musical plays for children, has performed throughout the country and abroad and recently published a children’s book to accompany Pushcart’s production of “Alice in Wonderland.”

Larry Hochman has a career as composer and orchestrator for over 40 years that encompasses theatre, film, recordings, concerts, television, and video games. Most well known for his work in theater, Larry has orchestrated over a hundred musicals. He has 18 Broadway shows to his credit and has won the Tony Award (“The Book of Mormon”), two Drama Desk Awards, and The Outer Critics Circle Award (“Hello, Dolly!”). He has received 9 Tony Award nominations, and 9 Emmy nominations.

Castillo, a native New Yorker, is a graduate of Kean University with a BA in theater. He is a founding member of The Theatre Project. For the past 18 years Oscar has been a member of Pushcart Players performing for young audiences throughout the US. Oscar also performs throughout New York City with Peculiar Works Productions.

Stacie Gogo is a graduate of Wilkes University with a B.A. in Musical Theatre and a Minor in Dance. Gogo appeared off-Broadway as a Kit Kat Girl in “Cabaret” at the Players Theatre, as Penny Pingleton in “Hairspray” at the Westchester Broadway Theatre, in the ensemble of “Grease!” at Surflight Theatre, and in international tours.

Dana Patrice performed in Lighthouse Opera of NJ’s production of “Ragtime” at South Orange PAC. She was featured in CDC Theater’s stage in “Vagina Monologues” and “Once Upon a Mattress.” She appeared in “Expiration Date” at The Tank in NYC for the Wet Paint play festival, OLT’s “Side Show, The Musical,” and “Aida.”

Danny Sims is a New Jersey-based actor and creative artist. He got his start performing in central NJ local theaters such as The Forum, Cranford Dramatic Club, and countless Plays in the Park (Edison) productions. He studied Musical Theatre at Montclair State University and has sung with The Encore Orchestra of NJ, as well as recently directing “The Shape of Things” with Third Revelation Theatre Co.

Pushcart Players is the award-winning professional touring theater company specializing in arts education for children. Twice nominated for an Emmy©, Pushcart is the recipient of numerous state and private awards for excellence and innovation. A social-profit organization founded in 1974, Pushcart brings substantive musical theater, workshops, and residencies to young people and their families in schools and theaters nationwide. The company has traveled more than 6.5 million miles nationally and abroad, from the rural red schoolhouse to the nation’s White House.