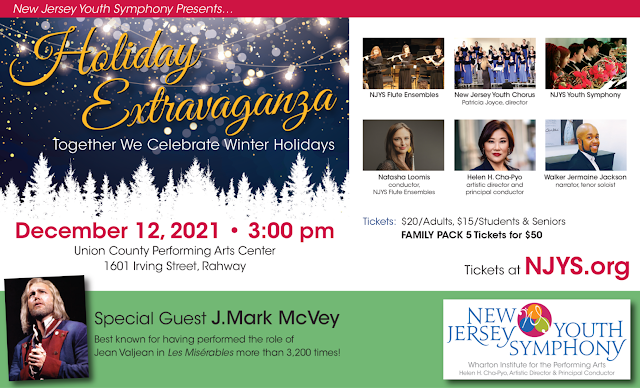 HOLIDAY EXTRAVAGANZA: TOGETHER WE CELEBRATE WINTER HOLIDAYS
WHEN: Sunday, December 12, 3-5 PM
WHERE: Union County Performing Arts Center, 1601 Irving Street, Rahway.
TICKETS: $20 for adults and $15 for students and seniors. Use promo code FAMILY PACK for 5 tickets for $50.
Tickets available at NJYS.org.

Under the baton of Artistic Director and Principal Conductor Helen H. Cha-Pyo, J. Mark McVey joins the award-winning NJYS Youth Symphony for four spectacular songs to fill the audience with the holiday spirit. Also performing are tenor and narrator Walker Jermaine Jackson in The Night Before Christmas and The Kwanzaa Song, as well as over 60 singers from the New Jersey Youth Chorus.
The NJYS Flute Ensembles led by Natasha Loomis will round out the afternoon of festive seasonal favorites. Best-loved holiday classics and mega hits, including "Bring Him Home" from Les Misérables intermingled with contemporary works by Valery Coleman, Randol Bass, Henry Curry, Ola Gjielo, and more in this family-friendly holiday pops concert. From Hanukkah and Christmas to the winter solstice and Kwanzaa, musical gems abound for all ages to enjoy at the Holiday Extravaganza.

Said Cha-Pyo, “It’s thrilling to be back on UCPAC’s beautiful stage for the first time in two years to perform for a live audience again. Along with our amazing guest artists, we are excited to bring you a concert filled with both new and traditional winter holiday music that will bring our community together to celebrate the joy of this season.”

“We are so thrilled to welcome back audiences to our annual holiday concert at UCPAC,” said Peter H. Gistelinck, Executive Director of the Wharton Institute for the Performing Arts. “Especially now, we hope our season of celebration means time for family, reflection, and thoughts about the true meaning of the holiday season for each one of us.”

As described in the Dallas Observer, “When tenor J. Mark McVey,..sings the haunting ‘Bring Him Home,’ your ears will write him a thank-you note.”
McVey made his Broadway debut as Jean Valjean in Les Misérables after having won the Helen Hayes Award for Outstanding Actor while in Washington, D.C. with the show. The first American to perform that role in London's West End, McVey also reprised the role with the Los Angeles Philharmonic to sold out crowds at the Hollywood Bowl and once again in the 25th Anniversary Tour of Les Misérables, where he won the Ovation Award and the Broadway.com Award on his way to eclipsing more than 3,200 performances in the role. McVey made his Carnegie Hall debut with Marvin Hamlisch and continues to perform with numerous symphonies around the world, among them Chicago, Detroit, Philadelphia, New York, Baltimore, Pittsburgh, Dallas, Houston, San Diego, Jerusalem, Vancouver, Toronto, Montreal, Calgary, and the National Symphony. His television credits include America's Got Talent and Days of Our Lives. He made his PBS debut with the Boston Pops in June 2002, followed by a PBS Christmas Special for the U.S. military where he was featured with Marvin Hamlisch and The National Symphony Orchestra.

The New Jersey Youth Symphony (NJYS), founded in 1979, is a tiered orchestral program offering ensemble education for students in grades 3-12 across New Jersey. NJYS has grown from one orchestra of 65 students to over 500 students in 15 different orchestras and ensembles, including the internationally recognized NJYS Youth Symphony. NJYS ensembles have performed in venues including the New Jersey Performing Arts Center, Carnegie Hall, and the John F. Kennedy Center for the Performing Arts. NJYS has received numerous prestigious awards for its adventurous programming from the American Society of Composers, Authors, and Publishers (ASCAP) and has had six European tours, including participation in the Summa Cum Laude International Youth Festival and Competition (Vienna), winning First Prizes in July 2014 and 2017.


Now in its 43rd season, NJYS continues to achieve musical excellence through intensive instruction and high-level performance. Under the guidance of a talented team of conductors, coaches, and teaching artists, students are immersed in challenging repertoire, learning the art of ensemble playing, and exploring their potential in a supportive and inclusive environment. NJYS remains committed to programming works by diverse composers and regularly features 20th century African American and women composers such as Duke Ellington, George Walker, Yvonne Desportes, Emma Lou Diemer, Julia Perry, and Florence Price. 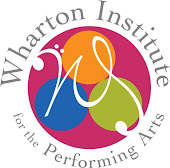