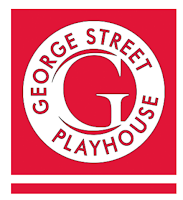 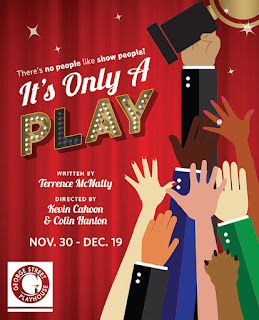 George Street Playhouse (GSP) is excited to continue their return to in-person performances
It’s Only a Play
by award-winning playwright and Broadway legend Terrence McNally.
co-directed by Kevin Cahoon and Colin Hanlon
WHEN: November 30, running through December 19, 2021.
WHERE: New Brunswick Performing Arts Center, Livingston Ave., New Brunswick
TICKETS: start at $25 and can be purchased online at www.georgestreetplayhouse.org
A Broadway opening night party in the producer’s stylish home brings together a delicious cacophony of characters—playwrights, producers, actors and wannabes—proving the old adage “there’s no people like show people” with an armload of wit, warmth and winter coats.
It’s Only a Play is a laugh-out-loud comedy love letter to the resilience of live theatre, and an homage to the people that—even when things seem impossible—always believe that the marquee will be lit again, and the show must go on.

Originally produced by GSP in the spring of 2021 as part of the company’s Virtual Season, this production now marks George Street Playhouse’s return to the Elizabeth Ross Johnson Theatre in the New Brunswick Performing Arts Center. GSP last performed in the beautiful, state-of-the-art venue for their triumphant debut performance in their new home two years ago in the fall of 2019.

“We are delighted that audiences will now have the opportunity to experience this wonderful comedy TOGETHER in the theatre, and that we can all share our laughter and joy with one another.” said Artistic Director David Saint. “Terrence McNally was an old friend and a treasure of the American Theatre. Producing this play as we return to live performances this season feels like a perfect way to celebrate his life and our love for our theatre-going audiences. An opening night party is a ritual we’ve all missed... Watch as they celebrate theirs!”

Doug Harris (Gus P. Head) Doug is an actor and playwright based out of NYC. He is thrilled to join the team at George Street Playhouse for this wonderful production. Select NYC Credits: Disco Pigs (Drama League), The Rape of The Sabine Women by Grace B. Matthias (Playwrights Realm), The Glass Menagerie (Masterworks Theater Company), Unity: 1918 (Project: Theater). www.dougharrisactor.com.

Patrick Richwood (Peter Austin) Many films, television roles and commercials have made Patrick’s face a familiar one worldwide and his work on screen has been dubbed in eleven languages. Stage favorites: Seymour in Little Shop of Horrors, Goat in The Robber Bridegroom, Treplev in The Seagull, Smee Peter Pan starring Cathy Rigby and Ellard in The Foreigner (Helen Hayes Award).

Colin Hanlon (Co-Director) is the Co-producer & star of Submissions Only. TV/Film: Modern Family, Difficult People, The Sinner, The Good Fight, and will be recurring on Uncoupled on Netflix this spring. Four shows at George Street Playhouse, most recently The Nerd dir. Kevin Cahoon. Four seasons at NYS&F and The O’Neill. Next Fall (regional premiere St. Louis Rep). @ColinHanlon

Kevin Cahoon (Co-Director) directed the critically acclaimed production of The Nerd for George Street Playhouse. As an actor, he has appeared on Broadway, off-Broadway, in regional theatre, as well as on television and film. Theatre highlights include roles in the original Broadway companies of The Lion King, The Wedding Singer, the revival of The Rocky Horror Show, and Chitty Chitty Bang Bang, and he made his Broadway debut in The Who’s Tommy. the original off-Broadway company of Hedwig and The Angry Inch, The Foreigner at The Roundabout (Lortel Nomination); and at Playwrights Horizons, Second Stage, MTC, The Old Globe, and The Guthrie, among others. He has directed developmental productions at NYC’s Ars Nova, for the comedy duo Tastiskank, and four consecutive record-breaking galas for New York Theatre Workshop.

Under the leadership of Artistic Director David Saint since 1997, and Kelly Ryman—Managing Director since 2013, the Playhouse produces groundbreaking new works, inspiring productions of the classics, and hit Broadway plays and musicals that speak to the heart and mind, with an unwavering commitment to producing new work. As New Brunswick’s first producing theatre, George Street Playhouse became the cornerstone of the revitalization of the City’s arts and cultural landscape. With its 45-year history of producing nationally renowned theatre, the Playhouse continues to fill a unique theatre and arts education role in the city, state and greater metropolitan region.

Founded by Eric Krebs, George Street Playhouse, originally located in an abandoned supermarket on the corner of George and Albany Streets, was the first professional theatre in New Brunswick. In 1984, the Playhouse moved to a renovated YMCA on Livingston Avenue, and in 2017 took temporary residence in the former Agricultural Museum at Rutgers University during construction of its new home.

The Playhouse has been well represented by numerous productions both on and off-Broadway. In 2018, George Street Playhouse was represented on Broadway with Gettin’ the Band Back Together which premiered on the Playhouse mainstage in 2013. American Son, produced by George Street Playhouse in 2017, opened on Broadway in 2018 starring Kerry Washington and Stephen Pasqual, and will appear on Netflix. Other productions include the Outer Critics’ Circle Best Musical Award-winner The Toxic Avenger. In 2015, It Shoulda Been You opened on Broadway and Joe DiPietro’s Clever Little Lies opened off-Broadway. Both shows received their premieres at the Playhouse. Others include the Outer Critics Circle, Drama Desk and Drama League nominated production of The Spitfire Grill; and the Broadway hit and Tony and Pulitzer Prize winning play Proof by David Auburn, which was developed at the Playhouse during the 1999 Next Stage Series of new plays.

George StreetmPlayhouse programming is made possible in part by funds from the New Jersey State Council on the Arts/Department of State, a partner agency of the National Endowment for the Arts. Grant funding has been provided by the Middlesex County Board of Chosen Commissioners through a grant award from the Middlesex County Cultural and Arts Trust Fund.
Posted by Ruth Ross