REVIEW: GEORGE STREET PLAYHOUSE'S EPISTOLARY ROMANCE WILL MAKE YOU FALL IN LOVE WITH LIVE THEATER ALL OVER AGAIN! 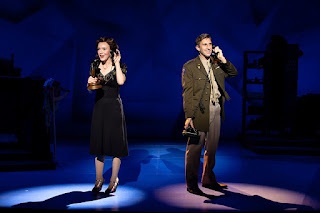 Since the last dramatic production I reviewed before the COVID-19 lockdown was Conscience at George Street Playhouse, it was only fitting that the first professional in-person performance I reviewed post-lockdown is Dear Jack, Dear Louise, a delightful, heartwarming romantic dramedy from the pen of Ken Ludwig now onstage at the Arthur Laurents Theatre in the New Brunswick Performing Arts Center.

Better known for his farcical comedies (Lend Me a Tenor is one), Ludwig displays another side to his talent, creating believable characters engaging in a sweet, but not precious, courtship, all through the exchange of letters!

Unlike A. R. Gurney’s Love Letters—where the two actors sit side by side, reading the letters and notes they have exchanged over a half century—Dear Jack, Dear Louise is full of movement, passion, emotion and danger. 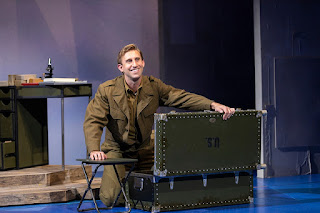 From June 1, 1942, when Jack reads his first awkward letter to Louise—on the suggestion of his parents who know hers—and Louise ebulliently responds, to their meeting in New York City on VE Day 1945, this budding romance unfolds with brio and poignancy. David Saint’s masterful direction Refreshing performances by Bill Army (right) as reserved Army Capt. Jacob (Jack Ludwig) and Amelia Pedlow as bubbly, budding, Brooklyn-born actress Louise Rabiner perfectly convey the vast chasm between life on the war front and life at home. David Saint’s masterful direction strikes a balance between pathos and humor. Over the course of two acts, Jack loosens up while Louise becomes more thoughtful—without sacrificing the laughs from the lighter side of life. 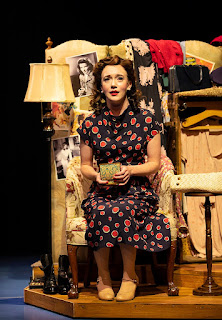 We really get to know Jack through Army’s performance. He’s angry about the war, likes getting to know his patients, has empathy for them and weeps when he tells Louise about his experiences with death. He may be awkward, but he’s a man with deep sensibility—both sides of his nature Army portrays beautifully and convincingly. Pedlow’s Louise (right) comes across as a bit of an airhead at first; intent on securing a role in a Broadway play, she goes on many auditions and hilariously regales Jack by re-enacting a scene from Arsenic and Old Lace in which she plays all the parts! But she shows a more thoughtful side to her nature as she responds to Jack's accounts of bombing and warfare; she even forgives his sister Betty for pushing her out of a window when she visits his parents (much to his dismay and embarrassment) in Coatesville, Pennsylvania!
To give more away would spoil the twists and turns of the plot, thus depriving would-be theatergoers of delight. Terrific production values add to the charm of the play. Lisa Zinni has provided a plethora of 1940s costumes for Louise to change into (onstage, behind a screen). James Youmans’ spare set lets us know exactly where we are and gives clues to the characters nature; projections on the back wall of the stage enlarge the setting, and letters suspended above the stage add just the right touch without being intrusive. Lighting design by Joe Saint communicates the passage of time, and sound designer Scott Killian’s use of period music before the play begins and during intermission really transports the 21st century audience back to the early 1940s! 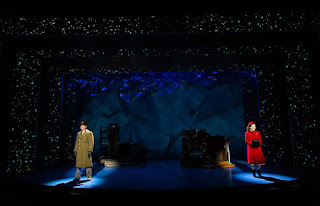 George Street Playhouse has chosen a terrific play to herald their return to live theater after the 19-month lockdown. With its engrossing plot and stellar performances, Dear Jack, Dear Louise has given me one of the finest theater experiences I have had in 25 years of reviewing! Oh, and if you’ve realized that the playwright and Jack bear the same last name, it’s because Jack is Ken Ludwig’s father and Louise his mother. This funny, touching, patriotic, uplifting story is a loving tribute to them both, and a treat for those of us who love live theater!