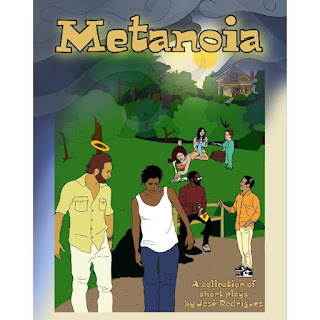 METANOIA
A collection of short works written by young and upcoming playwright José Rodriguez
WHEN: Sunday, November 14, 2021, at 4:00 p.m.
WHERE: White Eagle Hall, 337 Newark Ave., Jersey City
TICKETS: $20
Purchase here
METANOIA comprises four stories that follow ordinary individuals who confront unknown outside forces causing them to change their lives—or suffer potential consequences. Rodriguez brings METANOIA to the stage through JCTC’s Producer’s Lab program, which provides space and support for young artists as they transition into the professional world and begin producing and presenting their works.
“These shows all came to my imagination at various emotional points in my life, so I think in a way, you're seeing me up there. I feel these characters and stories are honest looks of humans at different points of their lives," said Rodriguez.
“It is a joy to present the works of emerging artistic voices such as José Rodriguez. By providing support and mentorship early on, we hope to empower young artists as they develop their professional careers,” added Olga Levina, JCTC’s executive producer.

José Enrique Rodriguez has always been a lover of stories. He spent most of his childhood attempting to write down all ideas he had. Rodriguez explored writing short horror stories in elementary and middle school with his mother and father's encouragement. Trying to follow in the footsteps of his literary inspirations, R.L. Stine and Stephen King, he wanted to strike fear in the hearts of his readers while entertaining them as well. Moving through high school and college, Rodriguez found a love for playwriting and screenwriting. Producing his own work for some time by renting out theatres and film equipment, he also found a passion for visual media. About to graduate from Montclair State University, Rodriguez is ready to share his work with the world.

Founded in 2006, Jersey City Theater Center is a nonprofit 501(c)(3) arts organization committed to inspiring conversations about important issues of our times through the arts. For more information, visit https://jctcenter.org or contact (201) 795-5386.
Posted by Ruth Ross