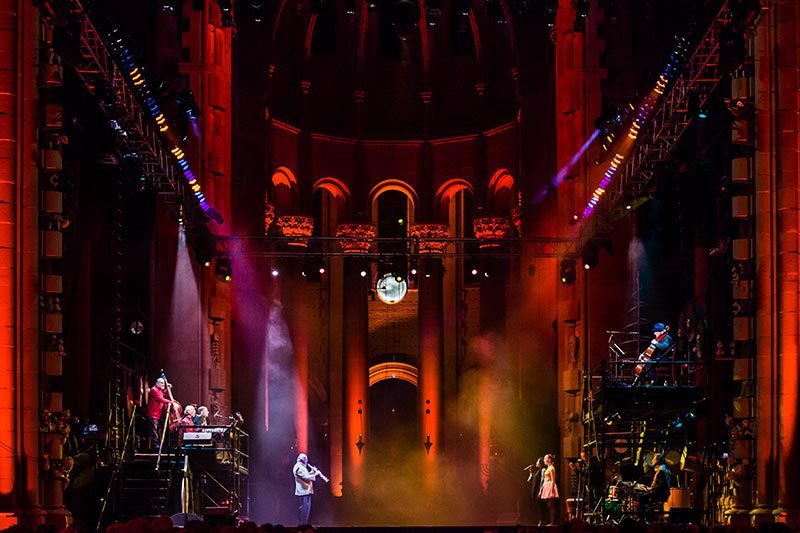 FOUR DECADES OF THIS LEGENDARY EVENT

IN THE WORLD'S LARGEST CATHEDRAL

With Special Guests Including

THE AFRICAN DRUMMING AND DANCING OF THE

"An immersive, multimedia extravaganza, as grand and expansive as its location." —The New York Times

Every December since 1980, seven-time Grammy® winner Paul Winter and his colleagues have celebrated the Winter Solstice at New York's Cathedral of St. John the Divine with a feast of music from cultures around the world. Over these past 40 years, Paul Winter’s Solstice Celebration has become New York’s favorite holiday alternative to the Nutcracker and the Radio City Christmas Spectacular.
This December, with their beloved cathedral closed for renovation, the 42nd Annual Winter Solstice Celebration will be a comprehensive video retrospective available to a worldwide audience.

In keeping with the inclusivist embrace of the solstice and the welcoming, intercultural, ecumenical tradition of the Cathedral of St. John the Divine, these concerts have always featured guest performers from different cultures of the world. SOLSTICE SAGA will include performances by 12 special guests, including Brazil’s Ivan Lins and Fabiana Cozza; Russia’s Dmitri Pokrovsky Ensemble; Gary Brooker, lead singer of Procol Harum; Ireland’s Davy Spillane and Nóirín Ní Riain; Noel Paul Stookey of Peter, Paul and Mary; and Abdoulaye Diabaté of Mali, along with the African drumming and dancing of the Forces of Nature Dance Theatre.

With this three-hour video epic, Paul Winter has aspired to weave an organic tapestry of highlights from the journey of musical adventures that he and his colleagues have enjoyed during the 40-year saga of the Winter Solstice Celebration within the spectacular architecture and titanic acoustics of the world’s largest cathedral.

"This event has been a resounding manifestation of the multiculturalism that is one of the great hallmarks of our country," says Paul Winter. "America has long been a sanctuary that has welcomed and embraced peoples from everywhere, and we are committed to doing everything we can to ensure that it will continue to be. These celebrations have come to be the most memorable events of the year for us, summing up the music adventures of our journeys, and bringing 'home' new friends we’ve met along the way. It is a blessing, I feel, that the marking of the Winter Solstice which was so integral to the lives of Northern peoples for millennia, has now re-emerged in our times.”

Winter continues, "Central to all the traditions of Solstice is the renewal of spirit, symbolized by the rebirth of the sun. Winter Solstice is a time for healing and for hope. It is a time to celebrate community and relatedness and a time to honor the diversity and the unity of this great cornucopia of life on Earth. In remembering the Solstice, we resonate once again with the rhythm of the cosmos and allow our hearts to embrace the optimism of our ancient knowledge that the light will overcome the darkness.

From the early days of his college jazz sextet, which toured 23 countries of Latin America for the State Department and performed the first-ever jazz concert at the White House for the Kennedys in 1962, to his later ensemble, the Paul Winter Consort, Paul Winter’s concert tours and recording expeditions have taken him to 52 countries and to wilderness areas on six continents, where he has traveled on rafts, dog sleds, mules, kayaks, tugboats and Land Rovers. He has recorded over 50 albums, of which seven have been honored with Grammy® Awards.