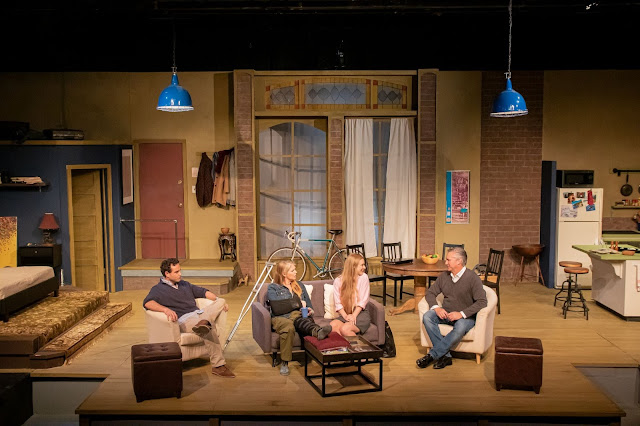 Donald Margulies’ 2010 drama, Time Stands Still, which opened the Chatham Playhouse’s 100th season, revolves around a photojournalist badly injured in Iraq and her war correspondent boyfriend, who’s trying to establish a bit of normalcy with her as she recovers from her wounds. (Above L-R: Scott Tyler, Sarah Pharaon, Emily Miller, Alan Ellis)

While the play addresses the morality of publicly chronicling war and its devastation—as opposed to working to end it—Margulies interweaves that weighty theme with a more private, domestic, and perhaps more mundane, one regarding whether to remain in the U.S., marry and start a family.

Unraveling this thorny conflict makes for two riveting acts performed by a stellar quartet of actors, giving the audience a great deal to mull over, chew, and discuss long after the stage lights have come down. 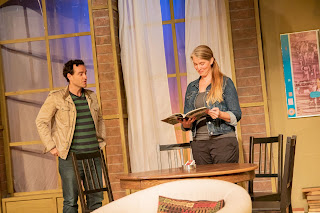 Directed with a firm yet delicate hand by Tait Ruppert, this production features a finely nuanced performance by Sarah Pharaon in the role of photographer Sarah Goodwin, who is recuperating from near-fatal injuries incurred in the explosion of a roadside bomb in Iraq that killed her native “fixer” in her Williamsburg, Brooklyn, loft (in a beautifully expansive set designed by Roy Pancirov). For a professional more at home in an adrenalin-fueled state of existence, this period when time seems to “stand still” becomes equally as—if not more—challenging as running around a war zone. 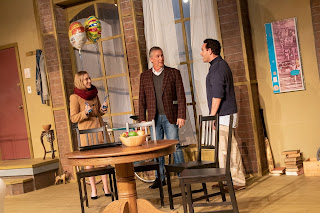 In contrast, her reporter boyfriend James Dodd, affably portrayed by a tender, thoughtful Scott Tyler, is wrought with guilt at experiencing a nervous breakdown from the carnage he has witnessed and not having been there when Sarah was injured. Add to that the knowledge Sarah shares that her Iraqi translator was also her lover, and emotional complications ensue.

The two appear to be a mismatch. While Pharon’s Sarah behaves like a caged animal, chomping at the bit to resume her exciting professional life (“I live off the suffering of strangers,” she announces), James is ready to give up the excitement for something more settled.

The domestic conflict is exacerbated by the arrival of their friend Richard Ehrlich (played with appropriate middle-aged gravitas by Alan Ellis), the magazine photo editor supportive of their work. He is accompanied by his latest squeeze, a rather ditzy, very young (“embryonic,” Sarah calls her) event planner named Mandy Bloom, played by Emily Miller as, at first, an airhead of the first degree, but who poses some very tough moral questions about Sarah’s choice of profession.

Without giving away too much how these conflicts resolve, domesticity is a tough competitor to the excitement of war. By the final scene, both Sarah and James have figured out what they want out of life, even if it isn’t what the audience thought it might be. (Below, Sarah Pharaon and Emily Miller) 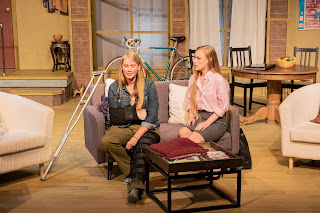 Joe DeVico is to be complimented on his sound design; the piano music played between scenes allows for smooth transitions and prop arrangement and is a counterpoint to what Sarah and James must’ve experienced on the streets of Iraq. Diane Giangreco’s lighting design is appropriate and atmospheric. Prop mistresses Tish Lum, Carol Petersen Saso and scenic artist supplied elements suitable for a somewhat bohemian loft occupied by a peripatetic couple. And Paul Canada’s costumes provided apt references to the characters wearing them.


The cast is to be commended for delivering dialogue so convincingly that it’s difficult to consider that Donald Margulies wrote down the words! However, this conversational delivery sometimes made it difficult to hear, especially Tyler; a bit more projection would have not made the audience strain to understand him.

That said, if you like meaty drama performed by a polished company directed by a sure hand, you won’t want to miss Time Stands Still. It runs at the Chatham Playhouse, 23 N. Passaic Ave., Chatham, weekends through October 16. Fridays and Saturdays at 8 PM and Sunday, October 16, at 3 PM. For information and tickets, visit www.chathamplayers.org.