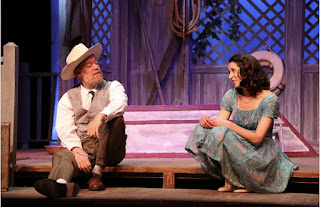 In the 18th and 19th centuries, wealthy individuals often erected a classical ruin called a “folly” on their estates to enhance the landscape. Its aged look reinforced the (often false) impression that the family and the estate had existed for a very long time.

The eponymous folly in Lanford Wilson romantic comedy Talley's Folly, now onstage at the Summit Playhouse, is a decrepit-looking boathouse on the Mississippi River in rural Lebanon, Missouri, built on the Talley estate by Uncle Everett Talley in 1870, a Victorian edifice complete with louvers, slats and various geegaws.

Derived from the French word for “foolish,” the term also refers to the lack of good sense or judgment, referencing the love affair between two oddly matched lovers at the heart of the “no holds barred romantic comedy,” Matt Friedman, a 42-year-old bachelor, and Sally Talley, the 30-year-old only daughter of a wealthy conservative, Protestant businessman. 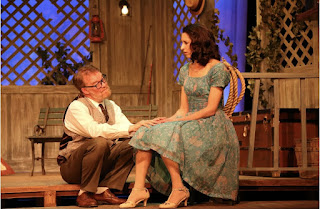 The events of Talley's Folly unfold over a 97-minute intermission-less time span in that boathouse on July 4, 1944. It seems that a year before, on a summer vacation from his job as an accountant in St. Louis, Matt traveled south 200 miles to Lebanon, Missouri, where he met Sally. After a lovely week together, Matt sent Sally letters every day, which she never answered; a visit to the hospital where she worked as a nurse's aide was equally fruitless. The problem with this relationship is that Matt is older than Sally, and more importantly, he's a Jew—and an urban one at that. Despite such dire expectations, Matt has once again traveled south, this time to declare his love for Sally and ask her to marry him. Whether he accomplishes his goal is the crux of Wilson's play.

Co-directors Joann Scanlon and Jeanne Johnston purposely pace the performances so that the play unfolds slowly—in what feels like real time—as the sun goes down and the stars appear. This languid tempo allows events to stealthily sneak up on the audience, providing an element of surprise as layers are peeled away from the characters’ facades to reveal their true selves. 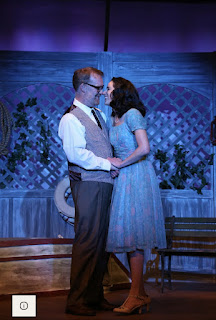 Charles Grayson’s garrulous Matt Friedman doesn’t come across as Jewish (I know that sounds like a stereotype, but his vocal cadence is not “wise guy” enough), but his earnest pursuit of the high-strung Sally earns him high marks in the romance department. His opening patter with the audience about what they can expect in the staging and setting breaks the fourth wall and really makes the audience feel a partnership in what unfolds. His series of jokes annoy Sally, and sound a bit too “cute,” but when his answers to her questions about his identity start to peel away his bravado, Grayson reveals a man haunted by his past and unsure whether he can ever find love in the future. Despite Sally’s mean and sarcastic attempts to rebuff him, his perseverance wins our sympathy for his plight.


Miriam Salerno is wonderful as Sally, a college graduate who calls herself a “liberal” and who is desperate to escape the stultifying atmosphere of her rural hometown. Under Matt’s questioning about why she is unwed at the age of 30, Sally is forced to face the skeletons in her own closet, which instead of forcing the two lovers apart brings them closer together. Salerno is maddeningly sassy, sarcastic, cruel and sensitive and easy not to like very much, but once her secrets are laid bare—in an emotionally wrenching scene played to perfection—she, too, wins our sympathy.

Roy Pancirov’s elaborate set does more than suggest a Victorian boathouse, it takes us there, down to the overturned rowboat with a hole in it, a set of life preservers, a bench, and lots of rope hanging from the columns. Joe Hupcey’s lighting design beautifully shows the passage of time. I only wish that Wendy Roome’s sound design would have had the crickets and croaking frog sounds last more than a just short time to evoke the coming of evening. Ann Lowe has provided costumes that tell us a great deal about the characters: Matt in a three-piece suit appropriate for an accountant, Sally in a pretty flowered dress she’s changed into from her hospital uniform, thus signaling the young girl beneath the brittle, rather sterile exterior.

Winner of the 1980 Pulitzer Prize and Drama Critics' Circle Award, Talley's Folly is the middle play of a trilogy about the Talley family, but you do not have to know the others to get pleasure from this one. The play's charm builds gradually, so that you might find yourself getting a bit antsy for something to happen beyond verbal sparring. When each character finally opens up, this mostly talky play really blooms dramatically, so that the ending is both appropriate and satisfactory. The second half of the play, when the light shines on these two lovers’ pasts, is so beautifully rendered that a tear slid down behind my mask as the stage lights went down!

If you are unfamiliar with the prolific Lanford Wilson's oeuvre, Talley's Folly is a nice introduction. While the time and place may be very particular, the themes he examines are supremely human and applicable to all. Keeping secrets is never a good idea, especially for romantic situations to succeed.

Talley's Folly will run through November 6 at the Summit Playhouse, 10 New England Avenue, Summit. For information and tickets, go to app.arts-people.com/index.php or visit www.thesummitplayhouse.org.