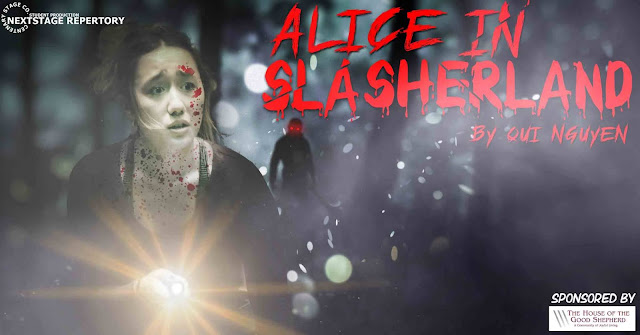 ALICE IN SLASHERLAND
By Qui Nguyen
WHEN: November 4 through 8; Thursday, November 4, at 7:30 pm, Friday, November 5, at 8:00 pm, Saturday, November 6, at 8:00 pm, Sunday, November 7, at 2:00pm, and Monday, November 8, at 7:00 pm.
WHERE: the Sitnik Theatre of the Lackland Performing Arts Center at 715 Grand Avenue, Hackettstown, NJ
TICKETS: $15.00 for adults and $10.00 for students and children 12 and younger.
For more information or to purchase tickets call the Centenary Stage Company box office at (908) 979 – 0900 or visit Centenary Stage Company on-line at centenarystageco.org
Disclaimer: because of the mature content, this show is recommended for mature audiences only. Viewer discretion is advised.
When young Lewis Diaz accidentally resurrects the soul of a brutally slain girl named Alice, he unwittingly unleashes a literal hell on Earth. Now, with every imaginable kind of demon, monster, and killer ravaging his small town, it's up to Lewis and his newly undead companion to protect his classmates—including longtime crush Margaret—from becoming freshly slaughtered carcasses. With the help of Alice's trash-talking demonic teddy bear, Lewis races to find a way to close the rift before the devil himself shows up and totally ruins their senior prom.

This production of Qui Nguyen’s Alice in Slasherland is directed by Centenary Stage Company’s own Christopher Young. Young serves as CSC’s General Manager and adjunct professor for the Centenary University Theatre Department. Young is an alumnus of Centenary University where he earned a B.A. in Theatre with a concentration in performance. He also has an M.F.A. from the Professional Actor Training Program of Ohio University. While at Ohio University, Young performed in several main stage and studio productions including, Holiday, Proof, Dianna of Dobson, The Idiot, Spike Heels and the world premiere workshop of War is F**king Awesome by NYC's Vampire Cowboys. His most recent acting credits include Atlas the Lonely Gibbon, part of Centenary Stage Company’s 2021 Women Playwrights Series staged readings, Bram Stoker’s Dracula at Centenary Stage Company, and Young most recently directed NEXTStage Repertory’s production of She Kills Monsters by Qui Nguyen.