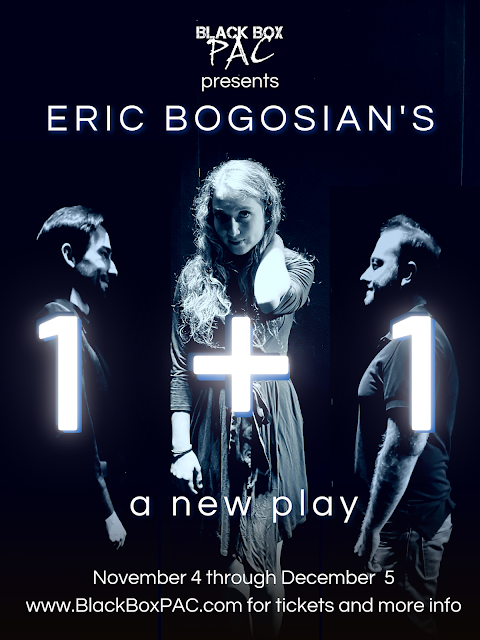 1 + 1
by Eric Bogosian
Directed by Matt Okin
WHEN: November 4 - December 5, Thursdays through Sundays at 8pm (off for Thanksgiving 11/25 and 11/26)
WHERE: Black Box Performing Arts Center: 49 E Palisade Ave in Englewood, NJ (right over the George Washington Bridge)
TICKETS: $35, can be reserved now at www.BlackBoxPAC.com

Michael Gardiner, Katie North, and Daniel Yaiullo are featured in 1+1, along with understudy Danielle MacMath, and director .
Michael Gardiner is a NY/NJ-based actor, writer, director, and teaching artist, as well as Co-Managing Director of The Black Box Rep Company. Michael holds a BA in Theatre Arts and Communication from Fairleigh Dickinson University.

Katie North is an actress, writer and producer based In New York. She has a bachelor's in neuroscience from Princeton University, where she once performed brain surgery on a fly. The fly didn't make it.  Katie's half-hour pilot script, Mourning Glory, has placed in eleven screenwriting competitions and was recently a finalist with the Sundance Episodic Lab.

Daniel Yaiullo is happy to be back at BBPAC after appearing in Sarah Ruhl’s How to Transcend a Happy Marriage in 2019. He graduated from NYU Tisch, and studied in Oxford at the British American Drama Academy.

Matt Okin formed Bergen County's Black Box Studios in 2007 and founded The Black Box Performing Arts Center in November 2015, now reopened in Englewood, NJ. Matt received a BFA in Dramatic Writing from New York University's Tisch School of The Arts. His first work for the screen in almost a quarter of a century is Issues, currently 'making the rounds' in Hollywood.

Black Box Performing Arts Center (BBPAC), a 501c3 nonprofit organization founded in Teaneck 2015 and relocated to 49 East Palisade Avenue in Englewood in 2019, and Black Box Studios (BBS), which has operated in Bergen County since 2007, together form Northern NJ’s premiere theater and performing arts school combo. BBPAC is a working professional theater run by The Black Box Rep Company, a small, tight-knit group of collaborative artists, which self-generates full seasons of cutting edge theater, reviving classics both old and newer, while also developing original works for the intimate stage. Many of these professionals double as teaching artists for Black Box Studios, running classes and workshops at the theater and at various schools and organizations in the area, for students currently ranging in age from 9 to 81. Our team is also focused on presenting other art forms within the space, such as comedy and music, as we host the emergence of a new and unique artistic community.

For more information, please contact blackboxpac@gmail.com or (201) 569-2070, and find us on socials @BlackBoxPAC