In recent months, those opposed to COVID-19 vaccine and mask mandates have likened such measures to those taken by the Nazi regime’s forcing Jews to wear yellow six-pointed stars on their clothing to set them apart. While such connections are specious, the very fact that 21st century folks can use them so blithely to rail against something that will save lives, not take them, is breath-taking.

Because we so often view the horrors of the Holocaust from the viewpoint of the victims—Jews, Romany ( “gypsies”) and homosexuals—Premiere Stage’s production of Erik Gernand’s Year One  is a refreshing and sobering look at the toll taken on an ordinary family by a populist’s rise to power and its terrible repercussions. While the play is set in 1933 Germany, it explores topical themes to poignantly remind us that even today the world must vigilantly confront ignorance and bias.

Year One references the first year of Adolf Hitler’s rise from leader of the Nazi Party to Germany’s Chancellor in 1933 to his assumption of the title of Fuhrer und Reichskansler—effectively becoming a dictator—in 1934. Over the course of 90 minutes, we witness the various reactions of the four members of this family—a female physician, her mother-in-law, her son and her brother—to creeping authoritarianism. 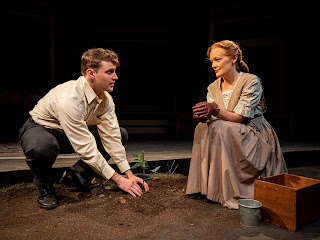 The family members’ response of the populist’s rise to power run the gamut from naivété to indifference to mild objection to outright dangerous resistance. We don’t even hear his name for quite a while, as if not uttering it would lessen the impact, but from the very scene, when the physician-matriarch Anna recounts her disgust at having to treat a party leader, only to have him question whether she is one of those vermin (i.e., a Jew), we know that she is not in favor if the regime, even though she doesn’t utter a peep at the use of the word vermin. Rosemary, her mother-in-law, is even more noncommittal; she doesn’t want to have her comfortable world turned upside down and is content “to go along to get along.” Meanwhile, her 18-year-old son Peter, smitten with the daughter of a Party leader (and a true believer herself), is easily impressed by the leader’s call to redeem Germany, to make it once again a world power, to feel good about itself after its defeat in the Great War—to restore the very masculinity he is searching for. However, when Anna’s brother Max unexpectedly arrives, carrying a dark secret or two, Anna is forced to make a choice between accepting a radical new regime and society or saving the people she loves. (Above: Peter [Eric Phelps] and Anna [Kathy McCafferty] plant a tree in their garden.)

Clearly, it’s a terrible choice, one that McCafferty communicates with palpable anxiety and pain. Though McCafferty’s Anna is the center of the family, she feels her grip on her world and her family’s welfare slipping. She conveys the problems faced by an ordinary person as the populist leader snatches power little by little, almost imperceptibly, until one can no longer ignore the terrible changes he’s wrought in society and, even more chilling, in her family. McCafferty’s body language and facial expressions telegraph this anguish so palpably that our hearts hurt for the challenges she must meet. A single parent, she’s torn between her brother and her son, reminiscent of the choice Sophie must make in William Styron’s novel Sophie’s Choice. Hers is a stellar performance, one that you’ll talk about on the way home from the theater. 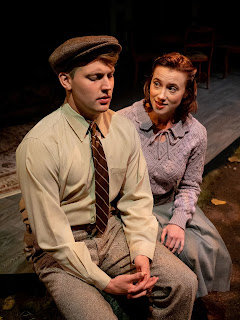 She’s matched in virtuosity by the young Eric Phelps (left, with Kaitlyn Lunardi as Claudia) as her son Peter. He goes from goofy, love-struck teenager to raging Hitler Youth member over the course of the year. And so imperceptible is his slide that it’s not until he appears in full Nazi regalia that we stop sympathizing with him, a young man who wants to feel proud of his country and is easily seduced by the leader’s claim to restore that pride. Phelps beautifully portrays a teenager on the cusp of manhood; when his nagging feeling that life is too good and that something is going to happen is brushed off by his girlfriend Claudia (Kaitlyn Lombardi, terrific as a wide-eyed, optimistic “believer”), our antennae quiver at watching him take the first step toward accepting authoritarianism. In the penultimate scene, his character’s confrontation with Anna is hair-raising as the two say terrible, hurtful things to one another and destroy their relationship even further.

As Anna’s mother-in-law Rosemary, Kate Kearney-Patch expresses the dilemma felt by an older woman who has lived through prosperity, war, and deprivation, only to grasp at whatever is offered that will restore the calm and quiet she yearns for. Yet she, too, is affected by whatever the populist leader is selling: She spies on Anna’s brother and complains about [Jewish] immigrants coming from Eastern Europe who are “taking German jobs” (sound familiar?) until she obediently raises her hand in salute. Clearly, the social climate has affected her so that she is ready to throw away her scruples for what she would consider peace. 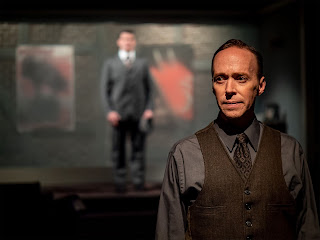 At the other end of the spectrum is Max, who is willing to risk his own safety to “save” his country from the machinations of the new leader. Kevin Loreque (right) is terrific as the lone person willing to stand up for his beliefs. As a gay man, he is on the list of “degenerates” the populist wants to get rid of in his march to purify the citizenry and create a new race of human beings; as a resistance fighter, he is sure to be captured, tortured, and killed for his anti-regime activities. His quiet courage is electrically conveyed when he confronts his sister, asking “where do you stand” and calling her out for healing people but refusing to help him get rid of the populist leader.

Once again, John Wooten displays his considerable directorial chops as he keeps the many scene changes moving quickly along and elicits finely tuned performances from his cast. Matthew Eggleton has designed a set perfect for a Mittel European family, a cozy living room and dining room where a well-off family would gather—and change. Zack Gage’s lighting, especially in the outdoor scenes, is atmospheric; Sound Designer Greg Scalera’s choice of ever-more strident and loud music chronicles the leader’s increasing, nefarious hold on the country in general and this family in particular. And Karen Lee Hart’s costumes suit the era and the characters very well and help us know their place in the family and society.

In Year One, playwright Genand has pulled off what I consider a tour de force, penning a story about an ordinary family on the eve of the Nazi/Hitler’s takeover of Germany while referencing the effect of the last four years on our own country and society. What I found so interesting is not only the obvious connection between the populist leaders of both countries but the insidious ways in which people so hungry to feel good about themselves are easily won over by a leader perpetrating an obvious con, which helped on an ordinary family me better understand why those who support such a person—often against their own best interests—would do so. Year One certainly provided food for thought—about art, about politics, about the pressure to conform, about the necessity to take a stand. Just before the stage lights come down, Peter offers a toast “to the future we create”; he’s repeating his leader, to be sure, but we audience members would do well to heed those words and work to re-create and restore civility, empathy, and order to our own world. George Santayana wrote, "Those who do not remember the past are condemned to repeat it." Year One  is a sobering look at what can happen if we fail to heed his words.

Year One will be performed at the Bauer Boucher Theatre Center on the Kean University main campus in Union through September 26. Performances are Thursdays and Fridays at 8 PM; Saturdays at 3 PM and 8 PM; and Sundays at 3 PM. Free talkbacks will follow the September 19, 3 PM, performance. For reservations or information, please call the box office at 908.737.4077 or visit Premiere Stages online at www.premierestagesatkean.com.