Lincoln Park Music Festival ACTIVATES THE COAST! Back Together Again In Lincoln Park! 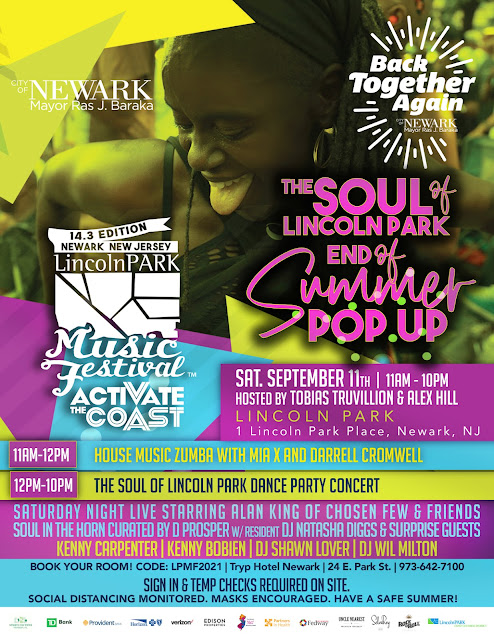 Lincoln Park Coast Cultural District (LPCCD) announced ACTIVATE THE COAST, a series of outdoor happenings centered around the City of Newark’s historic Lincoln Park that will bring Newarkers and day trippers “Back Together Again” around music, dance, food, culture, small business vendors and wellness in a safe and socially distant environment.  The series of events are powered by the City of Newark, its Back Together Again initiative and the Newark City Parks Foundation.

“Newark has amazing outdoor green spaces. Not only are we bringing people 'Back Together Again' but we’re using arts, music and wellness as a catalyst to bring new attention to spaces that were formally blighted or underutilized,” said Christopher A. Watson, Planning Officer, City of Newark and Safe Summer Initiative. Watson continued, “The City of Newark Safe Summer Initiative’s goal is to continue to strengthen our partnerships with the community anchor institutions by reinforcing those bridges that were already formed.”

September 11 starting at 9 AM, the newly formed Lincoln Park Sustainable Living Community Walkers Club powered by HOKA will gather outside for a series of 3-monthly urban terrain walks from Lincoln Park through the community to Newark’s other downtown parks for residents of all ages. The LPCCD Sustainable Living Community Walkers Club continues October 2 and October 30 and is hosted by team captain and Newark fitness influencer Tehsuan Glover. It’s free and participants are encouraged to register here.

At 11 AM the renown Lincoln Park Music Festival is popping up a one-day dialed back event entitled “The Soul of Lincoln Park”, which pays homage to Newark’s deep history with dance music culture. The day kicks off with House Music Fitness by creator Darrell Cromwell and Newark’s own multi-hyphenate spoken word artist/author/fitness enthusiast Mia X. The energy rises even higher with House music sets by DJ Shawn Lover and Music Producer, Songwriter, & DJ Wil Milton. Hitting the stage will be New Jersey’s Kenny Bobien, one of the most widely recognized male singers in the House music genre and often referred to as the “King of Gospel House Music”.

Taking the main stage for the first time ever is NYC’s SOUL IN THE HORN! The SOUL IN THE HORN movement began as collaborative vision between music curator DProsper and resident DJ Natasha Diggs as a weekly Friday night “must attend” quickly grew into a global phenomenon that dips into Soul, Funk, House, Latin, Afro-Brazilian, Reggae, Rock, Disco and beyond. Legendary icon and DJ Kenny Carpenter (Studio 54, Bond’s International Casino, WBLS-NY and KISS FM London, UK) will stir things up followed by a three-hour exclusive set by Chicago’s Alan King, co-founder of the infamous Chosen Few DJs and namesake festival. Founded by Wayne Williams in 1977, the Chosen Few Disco Corp., a group of popular DJs from Chicago’s South Side—Williams, Jesse Saunders, Tony Hatchett, King and Andre Hatchett—were part of the first wave of DJs and producers in Chicago who created the sound that became known as “House Music”.

“When you talk about House, you must include Chicago in the conversation. Not only is Chicago our 'House Music Twin City' but it also shares a rich cultural heritage in Soul, Blues, and Jazz with Newark, NJ,” said Anthony Smith, Executive Director of LPCCD.  “When Lincoln Park Coast Cultural District was invited as an anchor partner to the Mayor’s Safe Summer Initiative, we knew that if we popped up, we had to be our authentic selves by making this historic connection with Chicago’s Chosen Few—a major and historic House Music brand.  When you want authenticity, you can’t get more iconic than the Chosen Few DJs in Lincoln Park.”

The weekend continues on Sunday, September 12, at 1 PM, as Peace In Lincoln Park makes its debut! Known as “Peace In The Park,” South Mountain Reservation’s long-running meditation and wellness series, created by MED Ed and Zeal Cre8tive Studio LLC, is popping up in Newark’s Lincoln Park. The special edition entitled “Peace In Lincoln Park” is hosted by meditation guru and Newark Hip Hop artist BRICK CITI BUDDHA and features meditation, yoga, live music, vegan food, performances and local businesses. Peace In Lincoln Park is free and open to all ages. Organizers ask that you register here.

“Newark City Parks Foundation, Inc. is so excited to create and promote programs to encourage Newarkers to get outside and safely use our public green spaces. Newark is home to some incredible and historic Parks which are the perfect places to take in fresh air, walk, bike, skate, dance, and meet up with family and friends for events,” said Marcy S. DePina, Interim Executive Director. “Getting outdoors for a stroll or to socialize is an important component for healthy living and Lincoln Park is a beacon for music, art, and fitness as we get back together again.”